Donating Marrow and Playing Games for Charity: How I Saved A Life And You Can Too - Nerdist

Donating Marrow and Playing Games for Charity: How I Saved A Life And You Can Too

I’ve always liked giving to others. Whether it was blood, hair, or all of my Christmas money (Kids, make sure to ask your parents permission before giving all your money to charity), I wanted to give all I could to help others. Registering to donate bone marrow was a practical no-brainer.

I registered in 2009 and eagerly awaited being matched to someone. And waited…and waited. There’s this thing with the registry where many of the people who register aren’t called for years and some are never called at all to give bone marrow. Yet, there is always a shortage of donors. Donating bone marrow requires a match of Human Leukocyte Antigen (HLA) markers. This is a little tougher than a simple blood match, but it’s necessary for a successful transfusion.  A simple cheek swab is used to test donors and patients for 6 basic markers. It’s quick, easy, and everyone should do it.

Donors who match patients the closest will go through a blood draw at a later date for further matching. HLA markers are determined by ancestry. Though there are many people on the registry and many people are never called to donate; there are still many patients who, because of a rarer HLA type, are still waiting for their donor to join the registry and save their lives.

Knowing that, it wasn’t odd for me to wait for years. And honestly, I had resigned myself to wait many, many more. Two years ago, I received a call that I was a potential match! I was ecstatic and eagerly agreed to the additional testing. There’s a lot of hurry up and wait with marrow donation; they need tests done as quickly as possible, but they’re testing multiple people, have to wait for the results to come in, be analyzed, and so on to make sure everything is going to work. After a month, I had heard the news I had been deeply hoping for. I was the best match. 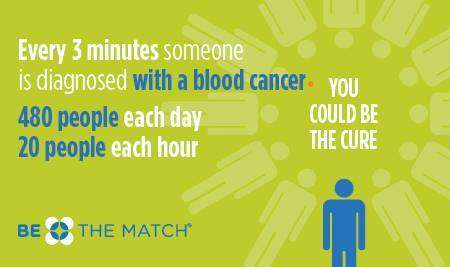 Image Credit: Be the Match

I’m actually tearing up as I write this. Donating marrow is nothing but emotional. I don’t think any donor I’ve spoken to will ever forget the moment they were told they’re a match.

Most people assume it’s terribly painful, major surgery, and requires drilling into the bone. Nothing could be further from the truth. Though some marrow donations are harvested from the bone, most are a much simpler procedure called Peripheral Blood Stem Cell (PBSC) collection. Instead of surgery, a donor is given shots for 5 days leading up to the donation which increase the number of stem cells in the blood. Then it’s a simple process called apheresis which filters the stem cells out of your blood. Most donors finish a collection in a single day and completely recover within a week.

The whole process leading up to apheresis took a while. Months passed with tests, signing waivers, and scheduling my shots. There was a small hiccup when the hospital tried to find a good vein for the donation day (my arm veins hate giving blood so they decided to go through my thigh) but I wasn’t worried. I eagerly awaited the day at the end of June 2014 when I would donate. 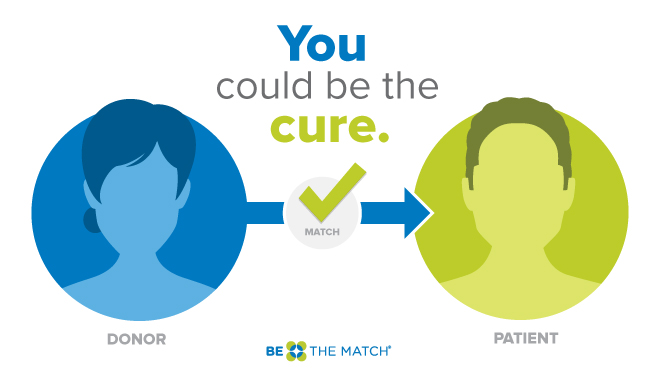 It was early June when I received the call. The patient I was supposed to donate to was too sick to go through the process. In order for their bodies to accept the new marrow, patients need to go through a process which basically kills off their unhealthy marrow before they can receive the donor marrow and hope to recover. And this can be dangerous if they’re too sick.

We had to cancel the procedure. There was nothing I could do about it. When the donation was cancelled, I broke down on the phone. I cried for the patient, I cried for myself, for the loss of this chance to help someone, and I cried at my utter helplessness to do anything about it.

Several months later, I received another call. The patient had managed to get healthy enough to go through the process. The representative asked if I was still interested in donating. I was elated, ecstatic, positively over the moon! A patient getting healthier after a cancelled donation basically never happens. It sounds cheesy, but I swear that I felt the pain in my heart ease that day. 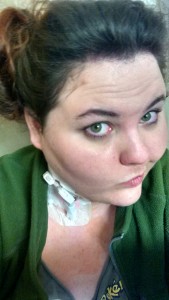 About to donate and in good spirits! Image Credit: Ailea Merriam-Pigg

This time around, however, I wanted to do something more. I’d been involved as a moderator for G&S’ Twitch for about 10 months and saw the amazing generosity of Team Hooman. I knew that, if I were to ever start my own Twitch stream, I wanted the focus to be on charity. With my PBSC donation imminent, it seemed like the perfect time to launch a charity drive!

I hosted my drive on a Monday, two days before my donation. I talked openly of the process I was going through, answered questions, and asked that people register or donate to save a life. We managed to raise about $1500, and I’m thankful to every single person who promoted the stream and stopped by to say hi, donate, or to simply watch and listen. Seriously, thank you all who’ve helped me along this journey.

After falling asleep from staying up way too late the night before; I woke up in the hospital, catheter in my neck, and actually quite comfortable. This hospital placed a central line through my jugular instead of my thigh since my veins still suck. Donation through anything but the arm is actually pretty rare, but then again, most people who donate have veins that don’t suck. The machine cycled through my entire blood volume 3 times in 5.5 hours and collected over 440 mL, which was apparently more than double what the nurse usually sees. 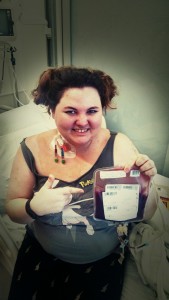 Done donating and super happy. I made this! Image Credit: Ailea Merriam-Pigg

I’ll never forget donating bone marrow that day. It was a wonderful experience that no level of discomfort or needle pokes could ever diminish. Despite the two year road I traveled to donate to this one patient, I would do it all over again in a heartbeat. If you’re interested in joining the registry, you can sign up online here. The initial sign-up is really easy; you sign-up online, Be the Match sends you a cheek swab kit, you take the swab, and send it in. That’s it.

Do you have any questions about donating marrow? Have you donated before? Let us know in the comments below!

Featured Image Credit: Be the Match