6 Things We Learned on the Set of DOCTOR SLEEP - Nerdist

6 Things We Learned on the Set of DOCTOR SLEEP

“Am I going to see the Overlook Hotel tomorrow?” That was the question on my mind the night before I was scheduled–along with a handful of other journalists–to tour the set of Mike Flanagan’s Doctor Sleep last fall. It was a question that also came up on the ride to Blackhall Studios, located just outside of Atlanta, the next morning; breathless speculation with nothing to back it up but a hunch and a prayer. Doctor Sleep is based on Stephen King’s novel of the same name, a direct sequel to his 1977 masterpiece The Shining–adapted into another masterpiece of a different medium by Stanley Kubrick in 1980. In King’s version of events, the haunted hotel explodes; in Kubrick’s version, it remains standing. Would Flanagan’s film be a sequel to the book or the film? We had no idea, but were collectively giddy with anticipation just the same.

The answer was made pretty apparent the second we entered the first soundstage and came face-to-face with some familiar floral wallpaper. I recognized it immediately as the Torrance family living quarters from Kubrick’s film–a pattern so ingrained in my nightmares that it was like stepping into a dream. The day would continue on like that, surprising and enthralling us at every turn. There were gasps, even tears, as we–a group of horror aficionados–stepped into a perfect recreation of one of the most famous horror sets of all time. Flangan had really done it–he was going full Kubrick. But to what extent? We were about to find out.

Here’s a breakdown of everything I learned about Mike Flanagan’s Doctor Sleep straight from the Atlanta set.

The film is a sequel to the film and the novel.

Though the set answered the question of “will this film be in the same universe as Kubrick’s,” producer Trevor Macy shed some light on the whole “book vs. film” sequel question. “It’s a pretty faithful adaptation of the novel,” he said, though he added that there were some obvious differences given the sandbox they were working in. “Our job is to thread the needle and take the best of the DNA from both [the book and movie] and hopefully bring that to the audience in a fun and engaging way,” he explained. “We aren’t trying to be in custody of one party or the other in the Kubrick/King divorce.”

Flanagan added that they had “to straddle that line between honoring the source material of the novel and the importance of Kubrick’s film.” Since King famously dislikes Kubrick’s adaptation, they had to figure out a way to satisfy King and the audience craving more Overlook.

Luckily for Flanagan and Macy, King had no problem with returning to Kubrick’s version of the Overlook. “Once we explained how we wanted to do it, he was actually really quite enthusiastic about it, which was a pleasant surprise,” Flanagan told us. Some of that trust came from his previous adaptation of King’s novel, Gerald’s Game, so there was already a working relationship. Macy explained that though King’s been involved in the evolution of the Doctor Sleep film–from the script level to casting–he was never “intrusive or disruptive.” Quite the opposite, it turns out. “We’ve found him amazing to work with,” Macy said. 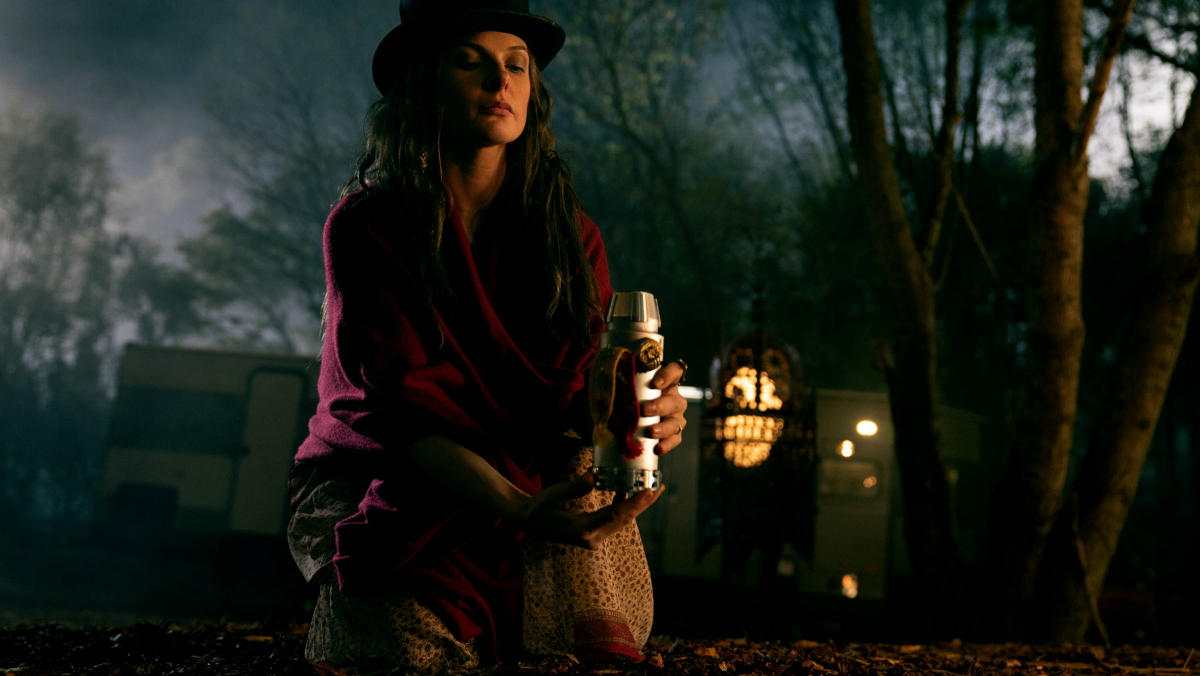 The True Knot is “darker” in the film than in the book.

The villain of Doctor Sleep is a mysterious, vampiric woman named Rose the Hat, who is played by Rebecca Ferguson in the film. Rose is the leader of a “family” called the True Knot, a group of nomadic psychics who feed off of children with the shining. In King’s book, the Knot is described as being somewhat flamboyant, with polyester clothing and a carnie-like feel. Flanagan decided to take a different approach, casting actors much younger than the characters in the book. He referred to the film’s version of the Knot as “new, very weird, and darker” than their book counterparts, adding that Ferguson and the other Knot actors helped shape their presentation. But even with a different look, they will still maintain that psychotic family vibe–one that Flanagan said couldn’t be more different than how the True Knot actors behaved when the cameras weren’t rolling: “Whenever they got together on set,  [they were] the most fun and happy and vibrant goofballs that we have in this cast, and it’s kind of ironic that then we roll and they turn into these horrible, horrible people.”

Flanagan is known for reusing certain actors in his various projects, and that will certainly be the case for Doctor Sleep, too. The True Knot was an excuse for him to load the film with actor friends. That includes Robert Longstreet, who previously appeared in Flanagan’s TV series The Haunting of Hill House; Catherine Parker, from Hill House, Absentia, and Oculus; Carel Struycken from Gerald’s Game (who you might also recognize from Twin Peaks and the Addams Family movies); and Flanagan’s brother, James, who has previously appeared in Absentia, Oculus, Gerald’s Game, and Hill House.

But people aren’t the only Flanagan staples making their way into Doctor Sleep. If you’re familiar with his film Oculus, you’ll know that it contains a famous horror mirror. The Oculus mirror has appeared in subsequent Flanagan projects, and will appear in Doctor Sleep, too. In fact, the mirror was originally inspired by The Shining. “When I first pitched Oculus to [Trevor Macy], I pitched it as a portable Overlook Hotel,” Flanagan told us. “That was the entire selling point for that movie.”

The Overlook Hotel was recreated in painstaking detail.

The most exciting part of the day was our tour through the recreated Overlook, which was housed on two separate soundstages. The first–where we conducted our interviews–contained the aforementioned Torrance family living quarters in the hotel’s upper level, which was connected to the hallway where we see the vision of the slaughtered twin girls in Kubrick’s movie. This stage also contained a recreation of room 237, including that iconic green bathroom. On a tour of the set, we got to walk into each of these rooms, and even look through the bathroom hole where Jack Torrance axed his way to wife Wendy–just like Dan does in the Doctor Sleep trailer.

We were then led to a separate soundstage that housed the real beast: An exact replica of the Colorado Lounge. Since the movie is set 30 years after the events of The Shining, the lounge was aged up with cobwebs and dust–but it was otherwise exactly as you’d imagine. Flanagan said that even the colors of the book spines on a nearby shelf were screen-accurate to Kubrick’s film. Like the original set, the lounge was connected to various hallways, and had two levels; up the stairs, the halls were lined with that iconic geometric carpet, and everywhere you looked was another iconic relic: the red elevators, the exterior of room 237, Danny’s tricycle. We were allowed to wander around, taking it all in, and it was truly transportive; like stepping right into frame, or into the past–as if we were Danny Torrance himself, revisiting this location with a certain knowingness.

Flanagan told us that though there were no literal hauntings on the set, there was still a peculiar energy in stepping into the Overlook’s recreated halls. “The sets are haunted in a different way–I think they’re haunted because of how completely the imagery that Kubrick created has burned itself into our consciousness,” he explained. “It’s not scary in the cool, Exorcist urban legend kind of way; it’s something that I’ve never experienced on a set before, where we’re haunted by our own memories of why we fell in love with movies. We can feel that again as we turn every corner in here.”

They did not film at the Timberline Lodge.

Kubrick’s movie used the exteriors of the Timberline Lodge in Mount Hood, Oregon to bring the hotel to life. According to Macy, they did not doing any filming at the Timberline for Doctor Sleep, since there has been some remodeling and additions to the original building that would make it too unfamiliar. However, that famous facade will still make an appearance in the film, as we were shown a set with a partial recreation of the roof of the Overlook, which looked identical to the Timberline’s. Another one of the movie’s spooky delights, and one I can’t wait to see translated to film when Doctor Sleep arrives in theaters on November 8, 2019.