There is a certain thrilling freedom to the blank page. A large part of the appeal of taking the big chair as the Dungeon Master is hand-crafting a fantasy world for the whole table to enjoy. But any writer who’s been doing it for a while also knows the frozen feeling of writer’s block when it’s time to create and there is nothing there. Sometimes, constraints and prompts are a good thing for a creative because they focus attention on usable ideas rather than wandering off and scrolling through social media. A Dungeon Master can never have too many ways to be inspired and Nord Games‘ latest Kickstarter hopes to help out anyone stuck on their next adventure with Objects of Intrigue. 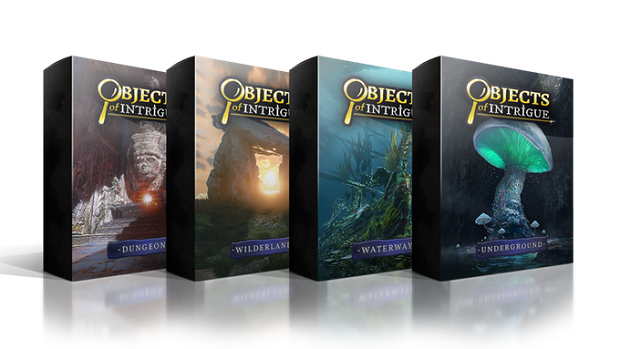 The Kickstarter offers four decks, each one themed for a different category of adventure: dungeon, wilderness, waterways and underground caves. Each of the 52 card decks offers some sort of item discovered by the adventurers in the course of their exploration. The cards are split into good, neutral and bad cards.

Good cards offer a beneficial item, useful information about the area or a bonus to make life easier for the adventurers. Bad cards naturally offer the opposite likes curses, traps or even a monster encounter. Neutral cards provide opportunities for roleplaying encounters, side quests or a little bit of unexpected flavor that might grab a player’s attention. The cards are optimized for Dungeons & Dragons 5e, but can be used with any fantasy RPG with a minimal amount of adjustment. 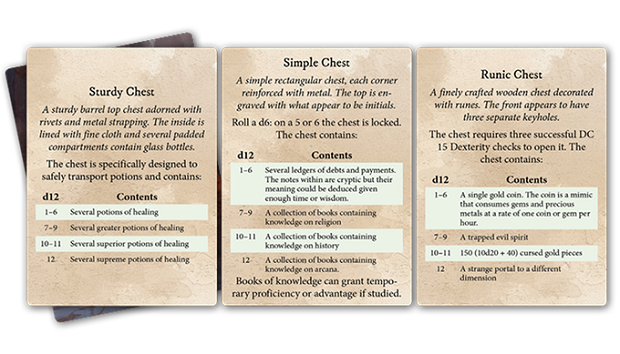 Dungeon Masters stuck for inspiration before their game nights can draw a couple cards, pick one they like and use it to structure a dungeon around. Consider a draw of the three cards above. The simple chest card in the middle seems like a great object ready to build an evening around. The Dungeon Master can roll a d12 to determine the contents (or pick which option they like most) and construct the background of the adventure. Perhaps a cleric hires the PCs to recover a chest full of religious books from a bishop’s crypt, or the players decide to steal the encrypted ledgers from the Thieves’ Guild tower to clear the name of their rogue for a crime she didn’t commit (for once).

Card draws can also come in handy during play. Dungeons often have empty rooms that players sort of just wander through to get to the good stuff. Flipping a card in an empty room gives the players some options to play with. Even if the Dungeon Master doesn’t have a story in mind at the moment a player picks up a rotted old fishing net from the floor, that item can easily be the kick-off to a side story for later in the campaign if the ghost of the fisherman wants to be put to rest. It could even be a larger adventure if the net is a lost relic of a sea god’s cult and their zealots come looking for it and look to make the PCs sacrifices!

One deck is $12, but the more decks backers buy, the more they save per deck. All four decks are $42 plus shipping. Nord Games is also releasing a PDF version of the decks for those who prefer print and play options, or to stack their decks as they see fit.

The Kickstarter ends on September 18th, so Dungeon Masters looking for a little bit of inspiration should act before time runs out!