Good Dungeon Masters are always looking for inspiration. The Dungeon Master’s Guide and Monster Manual are good starting points but there’s a wealth of adventures, campaigns, additional monster books and other aids out there looking to spark that crucial idea leading to an awesome adventure. Wizards of the Coast has supplied plenty of great campaigns over the past few years and other companies have put out a lot of excellent one or two session adventures. Experienced Dungeon Masters know how to strip out the parts they want from an adventure they might not want to use or adapt a pre-made adventure to fit their campaign better.

What about a third option? Absolute Tabletop offers a middle ground between quick prep and full adventure called an Adventure Kit. 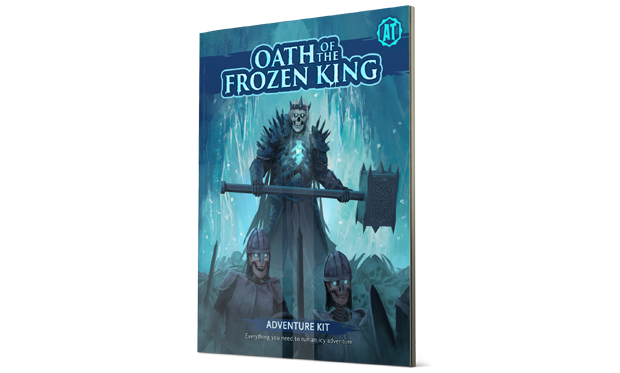 Their first Adventure Kit, Oath of the Frozen King, is set in the world of Dragongrin, a dark world wrapped up in an arcane storm. There’s a short primer on the word included, but the material within is flexible enough to be set in any snowy realm, be it an adaptation of Skyrim, a side-trek in Storm King’s Thunder or whatever the Dungeon Master’s home campaign needs. The titular king was a tyrant put to death with a magical runeblade but not before vowing to return from death and get revenge on those who brought him down. It’s here where the Dungeon Master makes the first choice: what clues the heroes into the fact the Frozen King is coming back? Did a cult break into his tomb to awaken him with a ritual? Is the runeblade used in his execution suddenly glowing and acting strange? Is the King appearing to people in their dreams issuing commands to free him from his slumber? 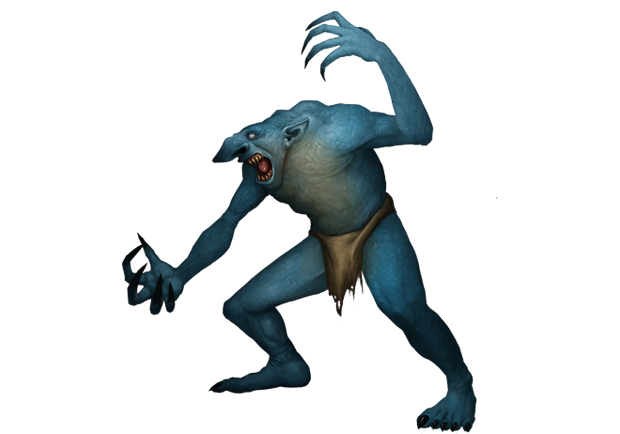 The elements of the kit are broken down by type. The first section details the locations in the adventure, followed by NPCs that inhabit the locations and potential encounters that each location can host. Each of these types are completely modular. Think of the game of Clue; one Dungeon Master could set up a combat with cannibal cultists (the encounter) near the runeblade’s altar (the location) where they must protect Ruska the tomb raider (the NPC). Another could feature Ruska (the NPC) dashing across a cracking floor of ice (the encounter) being chased by the heroes through an ancient Hall of Honor (the location).

Beyond these setups, the game offers a toolbox full of twists, atmospheric descriptions,  and connections that can be chosen for inspiration or rolled randomly for those DMs who can’t choose. Some Dungeon Masters want to have this stuff set in stone while others might be more willing to roll with changing the options in play. Have the players been mocking Haley the Paladin since she got introduced? Then perhaps she becomes the final bad guy instead since the players have invested in her as a character. The short bits of info are great for informing DMs on how their characters react but they can also be changed based on how the players react to situations. 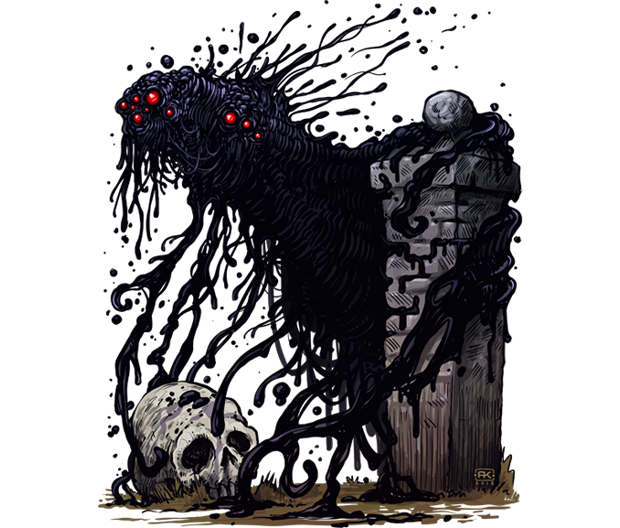 Their most recent Adventure Kit, Shadows Over Driftchapel, is currently on Kickstarter. This kit, set in the dark Victorian world of Gloam, offers an adventure with a more Lovecraftian bent. Players come to the seaside town for a bit of pulp horror adventure trying to free the town from monsters like the Shadowling pictured above. Monsters are handled in a unique way in Adventure Kits; rather than referring to the Monster Manual or reskinning monsters from a similar tome, they are broken down into the very essential element a Dungeon Master needs; hit points, armor class, skill bonus and damage based on the level of the encounter. Additional elements add flavor to the monsters like special powers or descriptive phrases, but this lets Adventure Kits pack in more monsters per page.

For those Dungeon Masters who want meatier monsters, these essential writeups function as templates that can be added to existing monsters to keep players on their toes. Long-time players might have the stats for every Monster Manual bestie from A to Z, but when a simple animated armor becomes a hand of the frozen king, expect a few gasps from the players during the battle.


Oath of the Frozen King and Shadows Over Driftchapel carve out a new space in adventure preparation. They encourage Dungeon Masters to mix and match parts they like into a narrative they want rather than modifying something that pre-exists.  Adventure Kits are a good thing to have handy for those weeks when pre-written adventures won’t do and a fully original adventure seems like too much work. The King may be frozen, but Absolute Tabletop’s Adventure Kits are hot.

What is your best tip for low-prep gaming? Let us know in the comments.