Warning: The following brief discussion of Disenchantment’s second season trailer contains spoilers! If you’re afraid of finding out how season one ends or minor reveals from season two, consider this your impassable moat.

The trailer for season two of Netflix’s Disenchantment has just dropped and it is jam-packed with everything fans of the show love. In the two-minute video, we reacquaint ourselves with team Dreamland, including Bean, Luci, King Zøg, and Queen Dagmar, and of course, Elfo! Who may or may not be dead: Place your bets after watching the trailer.

The trailer for season two of Disenchantment, which comes via io9, picks up where season one left off. The biggest reveal in the trailer is the fact that Elfo is still alive kind of! It’s hard to call his being in the show a reveal though. He was obviously coming back after that post-credits scene that showed him washing up onto some unknown beach and mysterious figures carrying him away. Also, the show’s not going to kill off one of its main characters, especially one who’s so excruciatingly happy.

Elfo’s getting some rest… in peace. Disenchantment returns September 20. pic.twitter.com/ALZAjOOTji

While it looks like we’ll be spending more time in “stoned” Dreamland — how many puns should we expect? — it seems that the adventure is, to some extent, to be continued elsewhere. Elsewhere includes Heaven, Hell, a giant octopus’s cave, and whatever city the below picture is from. It reminds us of a medieval New New York from Futurama and that is muy mágico. So much so that it has us speaking Spanish. 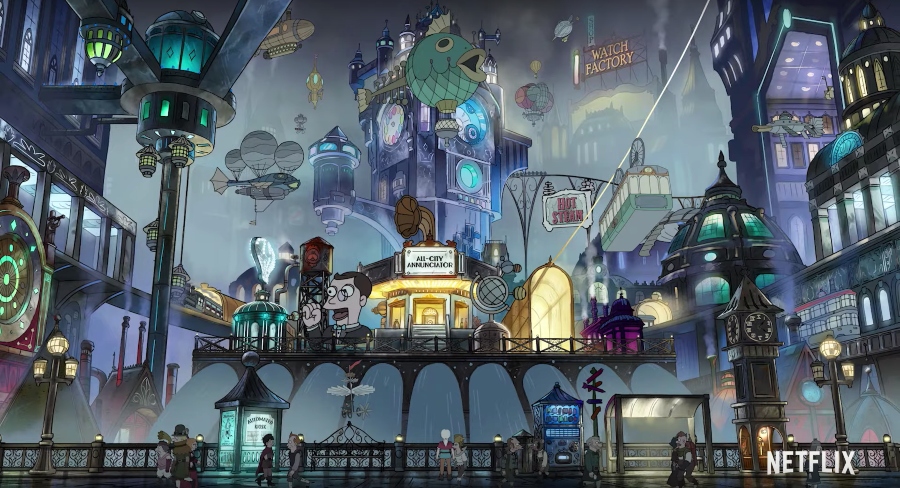 Season two of Disenchantment comes to Netflix on September 20, which means it’s time to binge the first season to look for any clues as to what’s coming in the second. We’re talking about the writers of The Simpsons and Futurama here, so we all know there’s probably a big series arc already planned. Hopefully it includes a lot more Sorcerio.

What do you think of the Disenchantment season two trailer? Give us all of your Elfo resurrection theories in the comments!