Discovering the World and Community of INGRESS - Nerdist

Discovering the World and Community of INGRESS

“Late to the party” should be my middle name. Despite spending an embarrassingly large amount of time plugged into the Internet and social media, I miss out on announcements, news, and trends all the time. Case in point: Ingress has been available to play since 2013, but I only recently learned about it from a friend. It’s a mobile game, and like most mobile games I’ve tried, there’s a serious addiction factor. However, it comes with positives no other mobile game I personally play (emphasis on the part where I’m not saying no other games are like this) offers: it forces you to leave your house—and a strong community has popped up around it.

I spoke with a few people about their Ingress experience, but first, the basics for those of you who share my habit of being late to things: Developed by Niantic Labs, Ingress is available for Android and iOS devices. The world of the game is one in which Exotic Matter (XM), a substance associated with Shapers, exists. Two factions strive to control the substance: the Enlightened and the Resistance. The Enlightened think the Shapers are good and help humanity take the next evolutionary steps forward, the Resistance believes the opposite and protects humanity’s freedom—that’s oversimplified, of course, but again, we’re talking basics. When you download and sign up for the game, you’ll have to choose which faction to join.

A big part of Ingress’s gameplay involves searching for portals: that’s the addicting part for me. Green portals and areas belong to the Enlightened, blue portals and areas belong to the Resistance, and gray ones are unclaimed. The portals are tied to real-life locations and are at places of cultural significance. This means anything from fountains, to wall murals, to parks are included. You have to get within a certain proximity of portals to hack them to acquire items or to attack and cause damage. Which means you have to study the map in the game and get outside on foot, by bike, or as a passenger in a car, to travel near portals. I’m discovering it’s a fun way to explore my neighborhood and get some activity. My Fitbit has never been so proud. 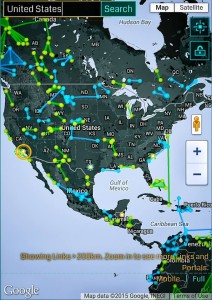 Having to wander around to reinforce or attack portals lends itself to community-building. You can find Google+ pages for local segments of your faction in order to concentrate your efforts. Sometimes groups come together to attack a portal together; it’s like organizing a raid in real life, but one fought with cell phones instead of weapons. Then there are XM Anomaly events. These gatherings are free and bring Ingress players together for hours of walking or biking and gameplay.

Renée, also known as Agent WitchieBunny, has participated in several in-faction (she’s Resistance) and cross-faction meet-ups in Connecticut and Washington, DC. She said, “The community has been amazing, and I have seen some absolutely stellar examples of Ingress communities all over the world pulling together both in and out of game to support each other and their communities. As for my CT Resistance, I wouldn’t trade them for anything.” She’s been playing Ingress for about nine months, and in addition to the positive community experiences, Ingress helped her find her way in a new city. Renée said, “I actually started playing Ingress very shortly after I moved to Connecticut from Pennsylvania. Ingress actually not only encouraged my exploration of my new home but helped me acclimate and get to know my way around. I’ve lived here about a year now and have explored much more than I otherwise would have, and I am still discovering new and interesting places and facts because of Ingress.”

Danicia has been playing Ingress for two years and has been interested in how people who aren’t necessarily gamers otherwise play Ingress and meet up with strangers to do so. She’s connected with a group of Resistance players in her area and though she doesn’t see them regularly, she connects with them on Google Hangouts. Ingress has helped her find tucked away pieces of art in her small town. Her husband has had a similar experience since he started playing Ingress a few months ago. He said, “There are nearly invisible historical plaques all over the place. Public art is so ubiquitous, that I often just don’t even notice it. Ingress often makes me wonder, ‘Just what exactly is just down that street?’ I’ve run across some pretty amazing parks that I never would have found without Ingress giving me a reason to go looking.”

You can shape your own experience as you play Ingress and make it a solitary expedition or not. You can get out on your own and use gameplay to find new and shiny art around your city and in new locales you travel to, or you can connect with other Ingress players by visiting Google+ community pages and Ingress’s events page. Flexibility and discovering local art is neat and so is going outside.

Are you playing Ingress? Let’s talk about it in the comments!