DISCOVER: LANDS UNKNOWN is the First Game Where Every Single Copy is Unique - Nerdist

DISCOVER: LANDS UNKNOWN is the First Game Where Every Single Copy is Unique

Fantasy Flight Games is creating some noise. When they announced the concept of their “Unique Game” line it provoked a wild range of emotions. The idea is that each copy of these particular games will be completely unique and utterly your own. So that box sitting on your shelf offers an altogether different experience than that of your neighbor’s.

If your initial reaction is a Theodore Logan “whoa”, I feel you.

While this twist will be utilized in the upcoming card dueler KeyForge, Corey Konieczka’s Discover: Lands Unknown is the first title to hit the street. The buzz was afoot and I tore into this one with a bear-sized chomp. Now that I’ve had some time to digest, let’s examine what’s passed through the other side. 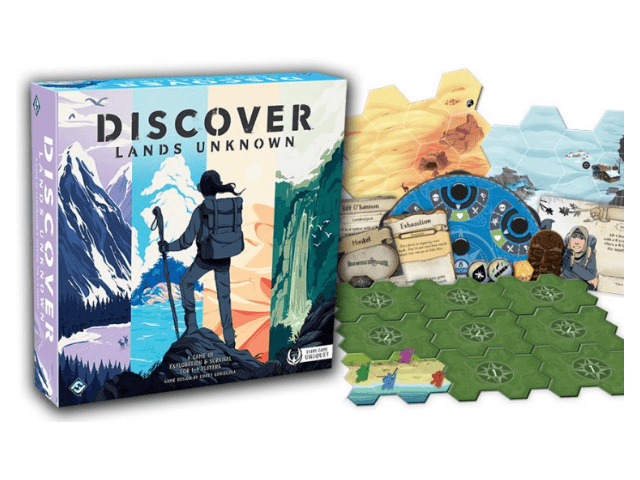 Discover is a survival game. For all the fevered discussion concerning its gimmick, the core systems are a solid presentation of endurance. It’s a surprisingly light game that sheds much of the weight of a typical FFG house-style design. You’re managing stamina (action points) and moving a little pawn around a map. You will come across resource tokens featuring woods, bushes, or rocks – and you will loot them.

These feature spaces are occupied by little tokens. Their faces are identical but the reverse side will have a bit of a surprise. Maybe those woods are indeed just some logs for you to craft with, or, just maybe there’s a predator lurking within. Perhaps you’re a bit lucky and there’s a special item.

This variation is accomplished through a codex of numbered cards. They sit off to the side and may be referenced during play. So when you flip that forest token and see a big 37 staring you right in the eyes, you head to another deck and fish out the card. These, both the tokens and the cards, are assembled by the whims of an algorithm and will vary between copies of the game. So I may come across a rocket launcher on one particular card (legit, it happened), while you may inherit a trike with a busted tire. Or maybe a nicely wrapped turducken. I don’t really know because your copy will be different, you see.

Your box will have two randomized sets of terrain and their needed components. Terrain consists of pleasantries like a fertile valley and lush beach, or harsh realities like snow-covered mountains and barren desert. Two random topological identities will comprise your box and determine your scenario mix.

Yes, this is a scenario based game with each linked to build a larger narrative. Reports are mixed on the effectiveness of these varying story-lines, but I can tell you that my particular set was interesting and a worthwhile exploration.

Delving into those scenarios can be enthralling. Discover grows some teeth with its controversial semi-cooperative structure as participants will want to unite, but they win individually. This will cause moments of selfishness as a player may not want to give up their clean water to keep you going, instead opting to horde it for themselves. The scenarios I’ve seen have done a great job in incentivizing teamwork and providing moments of clarity amidst the violence. 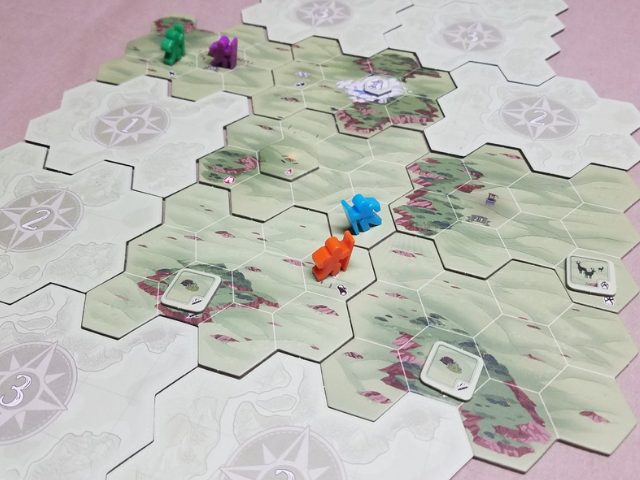 Such a large element of this game hinges on exploring the scenarios. Everything feels very exciting as you delve into the unknown and uncover juicy bits of flavor. While you can replay each of them, some of the spark will fade and you won’t quite hit the previous high. Due to the inclusion of only five scenarios the fire will only burn for so long.

That may not be a problem. A big factor here appears to be in trading your box for another once your journey is complete. You can stoke that fire and embark once again on a journey of content exploration.

It’s worth noting that similar to the mechanical base, the story here isn’t extremely rich. It can be compelling, but it’s conveyed in fragments of flavor text and leaves you in a place of trying to assemble the pieces. While there are substantial similarities here to the recent survival hit The 7th Continent, this is a less expansive and varied endeavor. The benefit is that it’s also not as fiddly or excessive, easily hopping off the shelf and engaging the participants.

The unique angle is an interesting one: it’s completely irrelevant within the scope of an isolated play. When you’re in the weeds hunting a monkey or evading a leprous cannibal, everything will feel unique. It’s only when you’re able to make comparative analysis will the singular aspect of your game be revealed.

In this way, the most pervasive aspect of exclusive content is in discussion. The Discover in this game’s title has a subtext of community. Only in the context of wider conversation are the strongest exploratory aspects fulfilled. Within the confines of a single group, none of this matters. 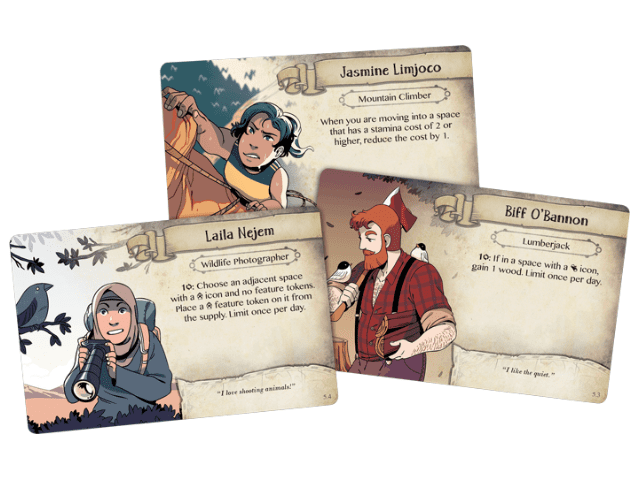 The naked psychology behind this product line is fascinating. We’re talking about these games and playing them because of it. Discover just so happens to be a very solid experience of survival and adventure, but it’s elevated by its circumstances.

This is certainly a design that will rankle some and captivate others. It includes the possibility of player elimination, a reliance on FFG’s algorithm for content cohesion, and a group dynamic that jives with the rough edge of the cooperative spectrum. For parties who align with those goals, it indeed holds up. Just enough story-threads are linked and just enough tension is accomplished that the randomized bits come together into a greater whole. It may not be as fearsome or impressive as Lion Force Voltron, but it’s frankly close enough.

Have you tried Discover: Lands Unknown? Let us know in the comments!  And be sure to join host Becca Scott on  Game the Game every Thursday here on Geek & Sundry to watch the best boardgames played with fantastic guests!