DICE THRONE Is What You Get When You Mix MAGIC: THE GATHERING and YAHTZEE

Love board games? Tune into How to Play and Game the Game where host Becca Scott showcases some of the best games the industry has to offer every week!

Dice Throne is a fighting game with, you guessed it: dice! (Throne sold separately.) Using the tried-and-true Yahtzee roll-thrice mechanic, players battle one another in an all-out deathmatch. Your actions are determined by your dice rolls. Each hero board has different Poker-like combinations needed for each action. Most of the time, your actions consist of attacks, but may also include healing, buffs/debuffs, or gaining Combat Points – Dice Throne’s currency for playing cards. These cards let you manipulate dice (yours or an opponent’s), upgrade your abilities, remove status effects, and a bunch of other cool tricks. But enough about the basics; let’s talk heroes. 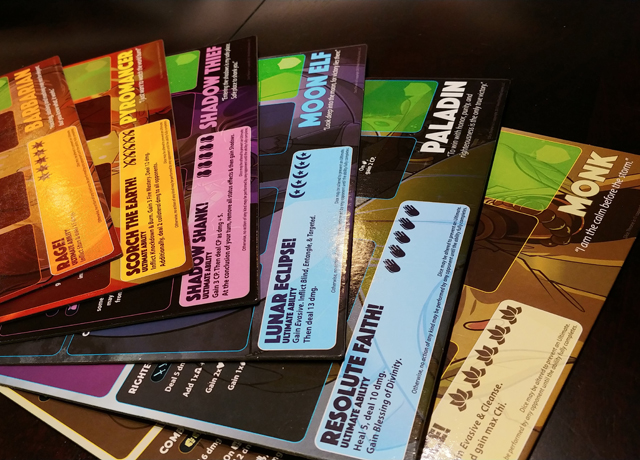 Like any good TV show, Dice Throne: Season One introduces a cast of characters to choose from. As soon as I fanned the display of colorful heroes, I reached for the Barbarian. He’s large and in charge, hitting just as hard as you’d expect. My brother grabbed the Shadow Thief, preferring to lurk in the dark and stab me with poisoned daggers. Typical.  My second favorite hero is the Paladin, your classic tank who is equal parts offense and defense, with a sprinkling of healer in there too. In strong contrast to that is the Pyromancer, a true glass cannon. While I’m not usually a fan of squishies, this fiery lady is a blast (sorry, not sorry) to play with her stacking Fire Mastery buff that she consumes to lay waste to opponents. The Monk is trickier to play as he needs to build up his Chi to tack on extra damage or reduce incoming attacks. I don’t do well this kind of subtle play, but I’ve certainly been on the receiving end of it. There’s also the Moon Elf, who annoyingly evades your attacks while simultaneously blinding or entangling you. 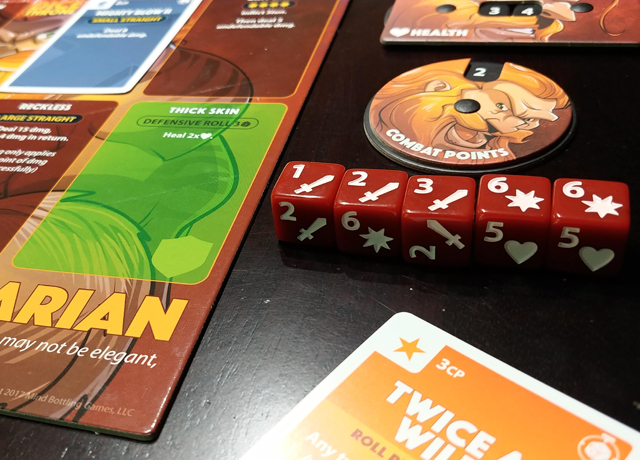 Having played all the heroes, it is impressive how different they each feel. There really is someone for everyone. And it’s not just about how the heroes attack; it’s also about how they defend. You see, you don’t just sit around getting walloped when it’s not your turn. You get to roll your dice to defend in a way that appropriately suits your hero.

My beefcake Barbarian has Thick Skin, allowing any rolled hearts to heal off the incoming damage. The Pyromancer, on the other hand, is so attack-focused that her defense is to deal damage right back. The Shadow Thief poisons, the Moon Elf prevents damage, the Monk gains Chi, and the Paladin does a little of everything in typical “I’m every spec!” fashion. Nothing makes your heart sink faster than your fantastic attack getting shut down by Divine Defense and half of it reflected back to you thanks to Retribution. (Which is why I’d rather be the Paladin than play against him.) 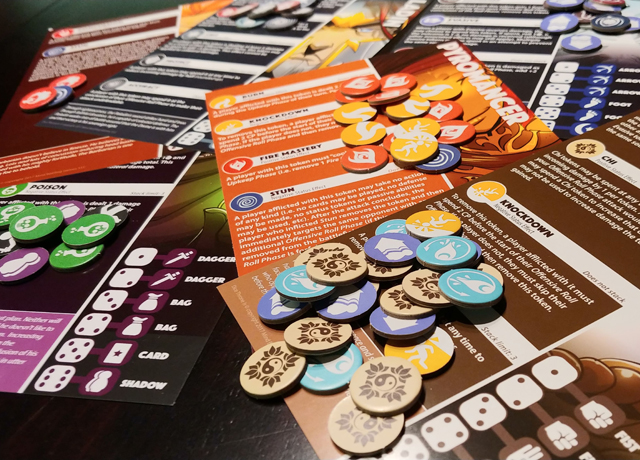 Despite the wide variety in play, matches tend to be super close. I’m not saying blow-outs don’t happen. They do. Sometimes the dice hate you. Sometimes your stupid brother gets five 6’s naturally on his first roll and slaughters you with Shadow Shank. Twice. And sometimes the cards don’t work in your favor. But more times than not, the games are about how well you play. It’s also not about who you play either. I know the heroes are balanced because my win-loss ratio is firmly in the red despite trying each character out.

While I prefer to play 1v1, Dice Throne does offer variants. Free-for-all is everyone for themselves. Targeting is determined by a die roll, which makes things a little too volatile for my liking. With a group, the team variant is the way to go, with players sharing a health pool. Being able to see each other’s hands allows for some pretty cool strategizing and big slam-downs. There are also options for simplifying the game or even making it less random by separating out upgrade cards. As I’ve said, there’s something for everyone. 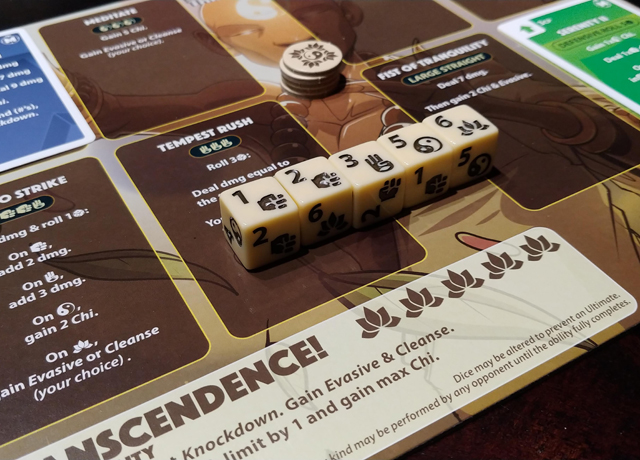 Fighting games are a dime-a-dozen, but it’s often hard to find ones that are special. Dice Throne is, undoubtedly, special. The interplay between dice and cards is shockingly simple yet incredibly compelling. It’s hard to believe no one had made this game before. I’m glad they did though and I can’t wait for the lineup in Season Two. Spoiler: there’s a Huntress! A Huntress.

What are your favorite dice games? Tell us in the comments!