Why Do We Use Dice in Tabletop RPGs? - Nerdist

Why Do We Use Dice in Tabletop RPGs?

Most tabletop RPG’s (and board games!) use some form of random generator to increase suspense. The theory stands, that if players are left to their own imagination, they would always win every encounter and their sword would strike the perfect blow each time—so dice are used to ensure failure. With a little bit of luck, characters can surpass the most iconic monsters and cut down entire Pantheons with a wooden sword. In chronicles or systems that don’t rely upon dice to determine outcomes, they are often used as analog data storage. Flipping over a few D10’s and using them as counters for damage or a ticking clock for a bomb are prime examples of this method.

Tabletop RPG’s weren’t always character driven and filled with uplifting narratives on their quest. The early ages of Dungeons & Dragons were more dungeon crawls than anything else. You rolled up a character (or several) and hoped you were lucky enough to score Psionics on an impossible chart. Many will remember when the Strength score for the Fighter class went up to 18, and then you rolled a percentile dice to eek out some extra bonuses with a stat that looked like: 18/55.

These entirely random metrics to your character was what you had before they entered the meat grinder on adventures where DM’s murdered characters with reckless abandon. After enough grueling combat, you might win and perhaps you would form an attachment to the character. Today, games start with character attachment first and then slap a lethal luck based system on top of that. So how have dice changed the nature of storytelling today? 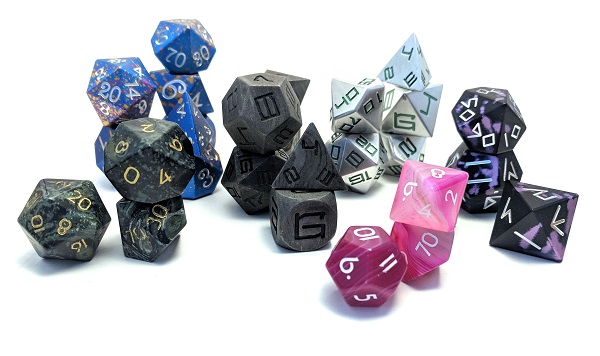 In the glorious age of modern gaming dice rolling apps, digital online-roleplaying, and even full tabletop programs that calculate every iota of data make regular dice seem pointless. Gamers are a superstitious lot by nature (raise your hand if you still place all your dice with 1’s face up for the dice-mites) and will both praise and shun their dice. Dice Shaming is a glorious internet meme filled with hilarious stories.

More often than not, players buy custom dice for both their characters and the kind of game they are playing. Luxury dice makers like Level Up dice craft dice from bone for the Necromancers in your party or even caged metal dice that wobble and jingle when rolled to add flair for your Bards. At the end of a long campaign, giving custom dice to players and GM’s has become something of a regular tradition in some groups. A way to memorialize and honor the shared memories the group has been through together.

Storytelling with dice today has become less about their use as a random number generator, and more about the suspense and impact they have in connecting the real world to the imaginary. In the end, it’s okay to yell at your dice and blame them for their terrible life choices and don’t let anyone tell you otherwise.

What’s your favorite dice-shaming story? Let us know in the comments below!