Detective Bullshit Is Full Of- Well, You Know - Nerdist

Detective Bullshit Is Full Of– Well, You Know

Are you good at creating something from nothing? Can you connect story threads where there seems to be no possible connection? Then Detective Bullshit: The Card Game should be right up your creative alley. Detective Bullshit is a game you win “by making shit up.” According to the creators, it’s like “Clue meets Cards Against Humanity,” but I disagree. I think it’s more like Clue meets Superfight. Allow me to bust the mystery of this upcoming card game wide open for you.

At the start of each case, one player takes on the role of Chief Bullshit. That player draws cards to determine the victim and the location of the murder. The rest of the players are Detectives trying to convince the Chief that their suspect is the guilty party. They do this over a course of three rounds. 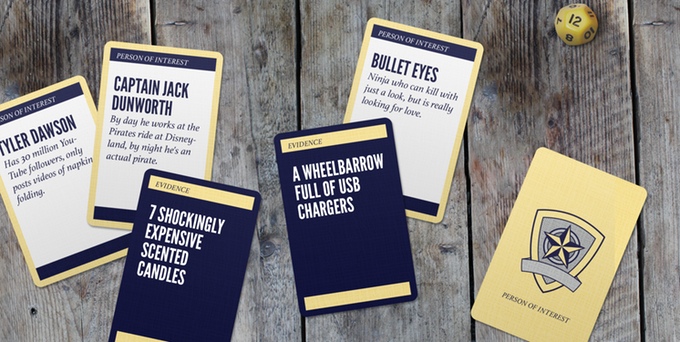 Round One: Detectives introduce their suspect and give reasons why this person is suspicious, their possible motive, and how they could have access to the victim. At the end of the round, the Chief chooses which story they favor and grants that player a Bullshit Token that they can use later to bribe the Chief.

Round Two: For the second round, the Detectives draw two Evidence cards and discard one. Then they must explain how their piece of evidence supports their claims. Again, the Chief picks a favorite, and rewards that player a Bullshit Token.

Round Three: In the final round, the Detectives roll a die to determine the “Due Process Complications” that could hurt or help their case. This could be adding or even losing evidence. At the end of round three, the Chief makes the final decision as to whom they believe built the best case against their suspect.

Check out this video to see the game in action!

Detective Bullshit: The Card Game was created by Tasty Penguin’s Corey Lubowich (as seen on Geek & Sundry’s Twitch channel!) who has worked on productions such as the musical Spies Are Forever, directed Airport for Birds at Chicago’s Second City, and collaborated with StarKid Productions. Lubowich’s partner, Rae Votta, is a media specialist who’s worked for the likes of Rolling Stone, VH1, Billboard, and more. The pair previously produced the strategy card game ILIOS as well as #SQUADGOALS.

They raised $24,304 via Kickstarter to fund the game, which is now available for pre-order on Tasty Penguin’s website. The game comes with 100 Person of Interest cards, 100 Evidence cards, 1 twelve sided Due Process Die, Bullshit Tokens, and game instructions. There is also an additional “Private Dick” expansion pack with more adult-oriented, NSFW cards that you can pick up for just $5 if you purchase it with the full game.

I’m definitely excited to try this out. As a fan of funny card games and improv, Detective Bullshit: The Card Game is definitely on my wishlist.

Think you have the skills to convince the Chief that you’ve found the murderer? Tell us what you enjoy about card games like these in the comments!