Thanksgiving has come early! Last week, the promotional push for Deadpool 2 began with a holiday-themed poster and a bizarre takeover of Good Housekeeping magazine. Today, fans got the first glimpse of the highly anticipated trailer as Ryan Reynolds reprised his role as Marvel’s Merc with a Mouth. But before the main event, Deadpool took on the persona of the late Bob Ross and shared a little “Joy of Painting” of his own.

The actual footage from the film doesn’t begin until around 90 seconds into the teaser, but from there it gets pretty intense. The reveal of Josh Brolin as Cable appears to be missing from this footage, but there is a quick glimpse ofÂ Zazie Beetz as Domino, as well as the return of Negasonic Teenage Warhead, who is no longer rockin’ a buzzcut!Deadpool’s allies also make their comebacks in these clips, as we see Wade reunite with Vanessa, draw guns with Blind Al, and bring in the hapless taxi driver Dopinder as his new sidekick alongside Weasel. The video offers very few plot hints, but there appears to be at least one mutant with pyrokinetic abilities, and it looks like Deadpool may be crashing a funeral. Knowing Wade, it might be his own funeral! 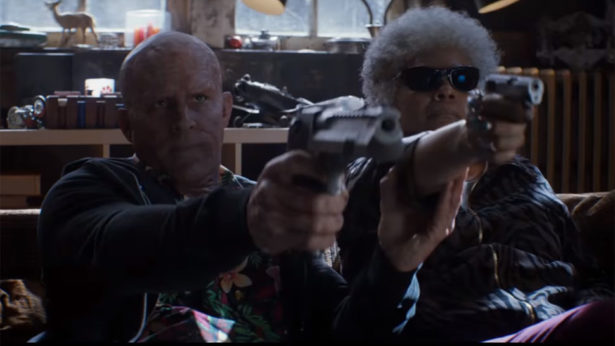 Fox also released its absurd description for the sequel, which is clearly not what we’re seeing in the clips. But it’s funny, and worth sharing.

“After surviving a near fatal bovine attack, a disfigured cafeteria chef (Wade Wilson) struggles to fulfill his dream of becoming Mayberry’s hottest bartender while also learning to cope with his lost sense of taste. Searching to regain his spice for life, as well as a flux capacitor, Wade must battle ninjas, the yakuza, and a pack of sexually aggressive canines, as he journeys around the world to discover the importance of family, friendship, and flavor – finding a new taste for adventure and earning the coveted coffee mug title of World’s Best Lover.”

Deadpool 2 will slam into theaters on June 1, 2018.Are you excited to see the first footage from Deadpool 2? Paint some happy little trees in the comment section below!