Who Is SHATTERSTAR in Deadpool 2? - Nerdist

Who Is SHATTERSTAR in Deadpool 2?

Deadpool 2 is almost upon us and with it a barrage of new characters, including one of the most outrageous fan favorites of all time, Shatterstar, created by Rob Liefeld and Fabian Nicieza, and shaped by some of the ’90’s biggest names like Jim Lee, Todd McFarlane, and Greg Capullo. Like so many of the characters born out of the ’90s comic boom, Shatterstar’s backstory is an enigmatic thing, filled with plot holes, canon changes, and an almost impenetrable amount of weird AF stuff that makes the character near unknowable. But luckily for you, we’re here to give you all the info available to help you decipher Deadpool‘s newest teammate and potential love interest…

Where does Shatterstar come from? 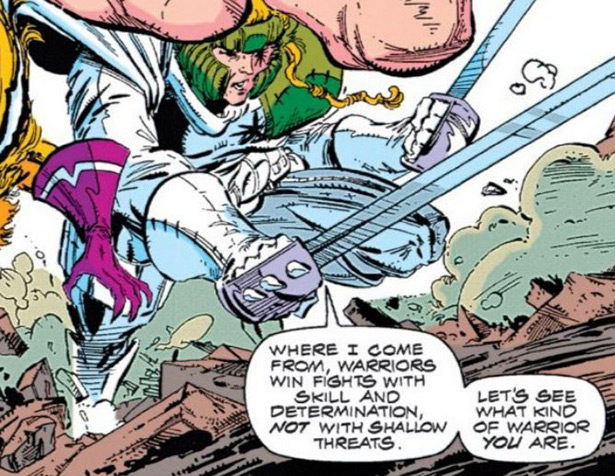 Shatterstar has one of the most baffling backstories of all time, if not THE most baffling. He was allegedly created in a “gestation chamber” on the planet Mojoworld in the alternate dimension known as the Mojoverse, but it’s also been hinted at that he’s the child of Dazzler and Longshot. That’s strange enough… but then you add in the fact that due to a temporal paradox, Shatterstar is also Longshot’s father! And lest we forget that Shatty also had his soul transferred into the body of Benjamin Russell–by his maybe dad and/or son Longshot, no less–a doppelganger from Earth with whom he shared multiple memories. 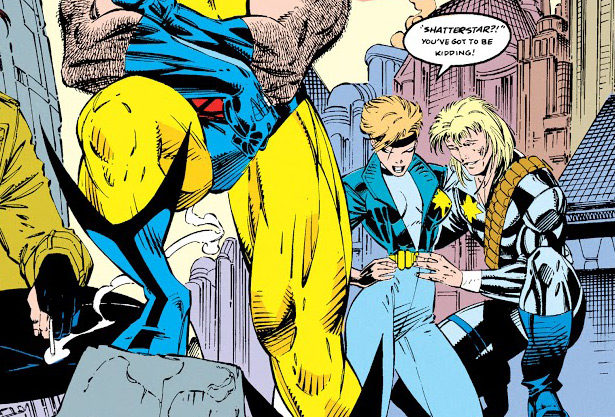 Shatterstar has three known names, the first being Gaveedra-Seven, the name from his birthing tube on his home planet of Mojoworld. The second is, of course, Benjamin Russell, the name of the mutant that he was merged with. And that leaves us with the third, which is just plain Shatterstar. This moniker was potentially given to him by his maybe-father in X-Men #11 when, after Xavier reveals that he senses an unborn child inside of Dazzler, Longshot is seen touching her belly as she says, “‘Shatterstar?!’ You’ve got to be kidding!”

What exactly is Shatterstar? Due to the fact that Shatterstar comes from another planet, he’s canonically an alien. But he’s also a mutant born of one mutant Earth parent and one Mojoverse parent, if we follow the storyline that names him as Longshot and Dazzler’s son. And then there’s the mystery of Benjamin Russell, which posits that Shatterstar is essentially a mutant (or alien?) possessing another mutant’s body… which is really, really creepy. For a large portion of his life, Shatterstar had no romantic or sexual attraction to anyone, despite having a “genetic bond mate” that he never met in the Mojoverse. Due to this, many fans saw Shatterstar as asexual, though that was never confirmed by his creators until years later. However, Shatterstar is now canonically bisexual after dating some female teammates at the time that he shared his first kiss with long term BFF Rictor in X-Factor vol. 3 #45 drawn by Marco Santucci.

What timeline is Shatterstar from? 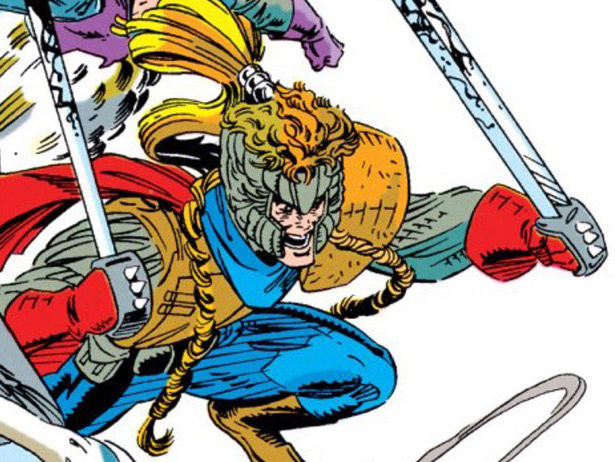 Shatterstar is a consummate timeline hopper, and it’s never really been clear exactly what his deal is when it comes to the time from whence he actually comes. The planet Mojoworld as we see it in the comics exists around 100 years in the future from the contemporary era in which Shatterstar is introduced, which definitely makes him a time traveler. But the Mojoverse itself actually runs concurrent to the contemporary timeline, and seeing as he’s in both that means he can exist in multiple timelines too. If you can make any sense of that, hop into the comments below and let us know because we still have no idea. 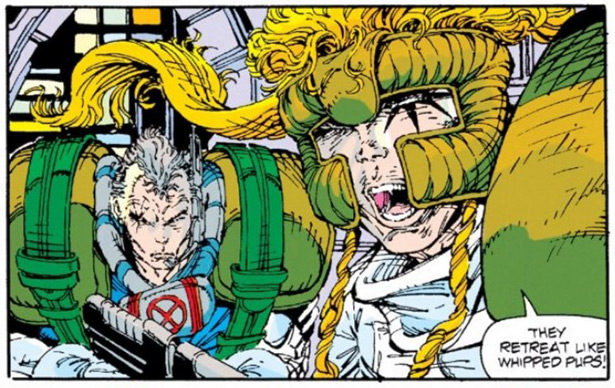 Not to be outdone by a famous alien superhero published by Marvel’s Distinguished Competition, Shatterstar possesses superhuman senses, strength, speed, reflexes, agility, dexterity, coordination, balance, endurance, and durability along with other fantastic features like hollow bones, enhanced learning capabilities, and a healing factor. Whew! Still with us? Okay, we’re almost done. Ol’ Gavy-Sev also has two more “lesser seen” abilities which have popped up infrequently in the comics–vibratory shockwave generation and empathically-driven teleportation.

What’s up with Shatterstar’s weird swords? Eagle-eyed comic book fans will know that the ponytailed alien wonder has one single bladed sword that he mostly uses with his right hand while the other sword often used on his left is actually two swords stuck together that share the same hilt. Deadpool 2 seems to be taking after more recent comics, which have simplified this by just giving him two double bladed swords. However, his original sword configuration begs the question of… why?!? And the sad truth of the matter is that, like almost everything else about Shatterstar, we don’t know.

Do you feel up to date on the dealings of Shatterstar? Feel like we missed an integral part of his wild backstory? Know the mysteries of his timeline? Let us know below!

More from the comics world of Deadpool!