Dungeons & Dragons is the most successful role-playing ruleset of all-time. Now you can take the D&D 5E mechanics you love, and use them to vault between the stars. Hyperlanes is a D20 role-playing game of duplicitous outlaws, trigger-happy gunslingers, greedy grifters, and even a hero or two hurtling through space while pursued by bloodthirsty crimelords and the merciless agents of a tyrannical government.

Take a ship held together by spit, glue, and gumption, and blast your enemies out into the void. Discover forgotten technologies from long-dead civilizations. Strap on power armor and battle your enemies. And if you run out of cash, you can always find a wealthy and unscrupulous individual ready to give you a loan, but watch out if you don’t make your interest payments on-time. It is developed by a young turk of the design world, Ryan Chaddock, and published by Scrivened.

Chaddock was inspired by science fiction, and the 5E ruleset. He said,

I’m a huge fan of space adventure gaming. I’ve been playing and modding Star Wars RPGs, for instance, since I was a kid. I knew I wanted to find a way to take the beautifully modular and relatively streamlined systems in the new edition of D&D and see how they might fit in with sci-fi. It turns out cinematic stories in space are basically the sci-fi equivalent of dungeoneering and travel. They blend with the D&D rules perfectly.

The rules of Hyperlanes are based on the 5E ruleset of Dungeons & Dragons, but it takes them and adds new characters classes, new weapons, and new feats to allow you to game among the stars. For example, Gambits are added to the ruleset. A Gambit allows a character to use a unique skill or derring-do to fix problems. According to Chaddock, “Gambits are designed to combine in interesting ways, and are made to work in both personal combat, as well as from behind the controls of a starship.” Character classes you know and love are translated into the genre of science fiction. For example, the Rogue becomes the Outlaw. According to Hyperlanes, an Outlaw is “the scum of the galaxy and the enemy to law and order. Empires and star alliances crack down upon these renegades and criminals, forcing them to the outskirts of what you might call civilized galactic society.”

Rogue abilities become science fictional. For example, Thieves’ Cant becomes Outlaw’s Code, a special system of signs and gestures which can be used to pass secret messages in normal conversation. You can get a taste of the brilliance of this translation of D&D to the stars by checking out the Outlaw character class on DriveThruRPG for free here. 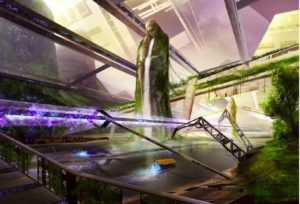 Better yet, given that Hyperlanes is produced under the auspices of the Open Gaming License, other designers can use the rules to write and publish their own sci-fi scenarios. Chaddock said, “It would be amazing if we had a thriving market for sci-fi 5E supplements.”

Ready to strap on a laser pistol and fly around the galaxy? Ready to see what 5E can do when given the whole galaxy to play in? Well, Hyperlanes needs you to zoom over to Kickstarter and back it now.

How do you think 5E will blend with sci-fi? Let us know in the comments below!