It’s indisputable that DC has many notable, remarkable, and amazing female characters on its roster. Historically, however, the company has almost exclusively marketed all their heroes and characters to boys and men. That’s now changing, much to our excitement.

“Girls want to experience the strength, action, and optimism of superheroes too, and DC Super Hero Girls is part of our long-term strategy to offer a diverse array of strong female characters in a fun and action-packed universe,” said Diane Nelson, President of DC Entertainment and President and Chief Content Officer of Warner Bros. Interactive Entertainment.

The show and universe is set around Super Hero High: a high school for heroes and heroines alike. The main cast of characters includes familiar faces with re-imaginings like Wonder Woman as the competitive leader; Supergirl as the clumsy and kind one; Batgirl as the techno-wizard martial artist; and Harley Quinn as the class clown. There are also faces that may be new to younger viewers such as Bumblebee, the social butterfly; Poison Ivy, the idealistic scientific genius; and Katana, the edgy artist. Also: the principal is Amanda Waller, a strong female role model in her own right.

While the DC Super Hero Girls website launched in October of last year, a 44-minute special will be headed to Boomerang, slated to air this spring.

Beyond the show, there will be a rollout of dolls. Nelson admitted to the LA Times that young girls have been mostly excluded from the superhero action, despite the fact that there was $7.4 billion on spent on girls’ toys in the US last year for kids aged six to 12, according to research firm NPD Group, with over $2 billion of that being dolls. 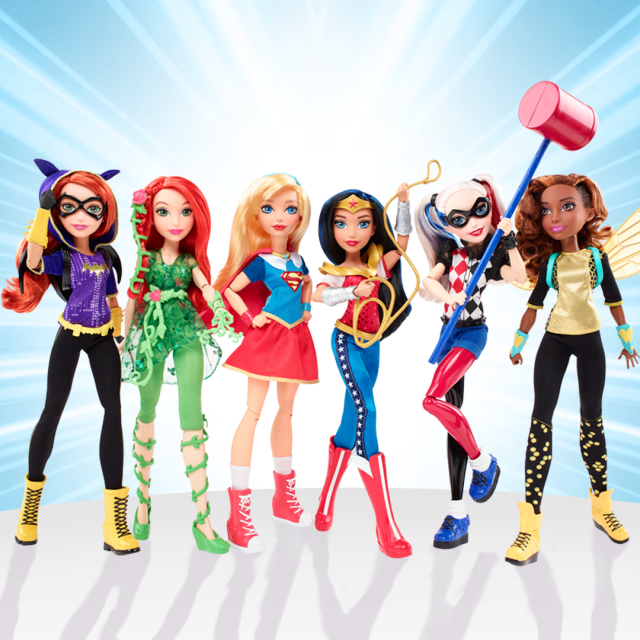 The dolls are delightfully designed, and look appropriate for high school heroes: cute, accessible, and powerful. How can we look at Supergirl’s calves and not think she could kick butt? No stiletto heels or plunging necklines for these characters, nor are they clad in pinks, purples and teals that are typical of girls toys. You won’t be seeing flouncy or cumbersome dresses on these gals either; they’re dressed to be practical, not princesses.

And of course, there are comics. DC is working with Shea Fontana to create the inaugural graphic novel. Scheduled for release in July 2016, the young heroines are kidnapped by a teenage Lex Luthor the day before Super Hero High’s semester finals. Together, they must combine their powers to beat Luthor and race back to school before final exams begin.

“I think [girls] have been ignored for a long time,” said Deborah Snyder to the LA Times, who is producing Wonder Woman,  Justice League and other films for Warner Bros. “Girls like action. It’s important for girls to see themselves as the hero.”

“I think this is one of the most important things that DC will do,” said Geoff Johns, DC’s Chief Creative Officer. “It’s changing the culture of what superheroes are.” We couldn’t agree more.

What do you think of DC’s Super Hero Girls? Which characters would you love to see in the halls of Super Hero High? Let us know in the comments!