You probably wouldn’t expect David Gordon Green and Danny McBride to be the first choice to make a sequel to the mother of all horror film classics, John Carpenter’s Halloween, but thanks are due to producer Jason Blum for sending it their way. Forty years after the original film’s release, Green, McBride, co-writer Jeff Fradley, and most importantly, star and  big beating heart of the franchise  Jamie Lee Curtis, made a film that’s a profoundly feminist re-examination of its psychology of trauma through its iconography. It’s also a rip-roaring slasher flick that’s hands down the best Halloween sequel ever.

The film starts out in a self-reflective place. A pair of British crime podcasters (Jefferson Hall and Rhian Rees) are in town for the 40th anniversary of the Haddonfield Babysitter Murders, and are hoping to not only speak to Michael Myers, locked up in a prison mental hospital, but to possibly facilitate some catharsis between Laurie Strode (Curtis) and her would-be killer.

The troubled Laurie lives alone in a fortified compound, maintaining a constant hypervigilance for the past several decades that’s had a profound effect on her life. She’s a doomsday prepper, alright—locked, loaded and armed to the teeth for the day she meets Michael Myers again. She’s been reckoning with her trauma and PTSD since that fateful night, and has had no relief. It’s not 20 minutes into the film before you realize, “holy crap, is this a horror movie about trauma?”

It’s not just Laurie’s trauma, though. There’s the intergenerational trauma that weaves its way through her family—her daughter Karen (Judy Greer), who was raised in constant preparation for Michael’s return, and now wants nothing to do with it; and her granddaughter, Allyson (Andi Matichak) who bears the weight of the strained relationship between her grandmother and mother.

Naturally, it’s Halloween night when a prison bus transferring Michael to another facility crashes and he escapes. It’s the reunion Laurie has been expecting, dreading, and praying for, and there will be catharsis, all right, likely from the business end of one of the rifles she’s been stockpiling in a basement panic room. Shockingly, the people of Haddonfield have forgotten to fear Michael Myers. Those ‘70s-era serial killer boogeymen murdering at random aren’t the most dangerous and common predators anymore, and in terms of horror movie monsters, he’s all too real—there’s nothing supernatural about him. But Michael Myers wants to make sure they remember; that you remember.

In many ways, Halloween is a horror film in name only. While it features some brutally gory images and violence, it’s not all that scary, with Michael’s plodding yet propulsive walk and perfunctory killing style. The tension doesn’t build until Michael faces a foe who can actually take him on—Laurie. And in that regard, this is a horror film that inspires cheers, not screams. 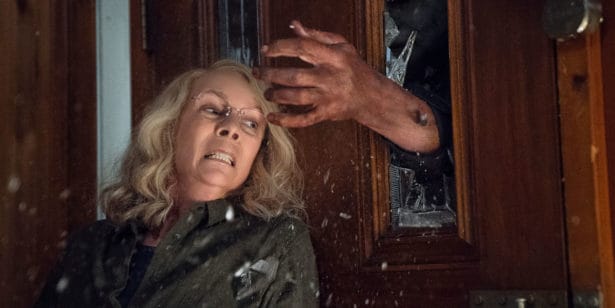 Michael’s new doctor, the new Loomis, Dr. Sartain (Haluk Bilginer), posits the theory that the never-ending pursuit of Laurie is what keeps Michael alive, while Laurie’s fear of Michael is what keeps her going. The Halloween films have always been about these two very simple forces meeting again and again—her survival instinct and his desire to kill. That’s why she’s the only person who can face him.

But this show-down is symbolically important as well. Because this Halloween is about the specific question of female trauma and male predators, and how a victim can reclaim some power through her own actions. To this end, Green brilliantly reinterprets the iconography of the original film. We see the same, familiar items—the knife, the closet doors, the stairs—but reversed. The places and things that put women in peril are violently ripped back by them in this movie. Watching Laurie, we see that she’s learned from her story in the same way that we have. There’s absolutely no yelling “don’t go in there!” to this Laurie Strode, because she’s already thought of it, and secured her house around it.

For all of the deep and fascinating semiotic analysis of this film, it’s also just a great Halloween movie. Matichak proves to be a perfect final girl as Allyson, cut exactly from her grandmother’s cloth: tough, smart, and principled. The film is stunningly shot, in highly stylized, beautiful images that never overwhelm the storytelling. And the score, by John Carpenter himself, as well as his son Cody Carpenter and Daniel A. Davies, is a masterpiece that will send chills of pleasure up your spine. It’s everything in a Halloween film that inspires us to return, again and again, but the reversal, reimagining and reinterpretation of these elements is what truly thrills in this new iteration.