Darkest Dungeon is Amazing But Will Drive You Insane - Nerdist

It’s a good time to be a fan of challenging strategy-RPGs; we’ve had our hands full with some very well-made games. We’ve had the releases of Fire Emblem Fates and XCOM 2, both highly anticipated AAA sequels. But somewhat less visibly, we also got the official release of Darkest Dungeon. Spoiler alert: it’s really good.

The premise is fun, if not totally original. You are an heir to nobility, but your estate has been ruined by one of your ancestors, whose heretic experiments unleashed terrible monsters. These monsters overtook the family estate, and even the nearest surviving town, Hamlet, is threatening to collapse under poverty and decline. You have been called on to correct your ancestor’s mistakes, which you do by recruiting brave heroes and sending them into the area surrounding the old estate. Ultimately the goal is to enter the estate itself–the titular Darkest Dungeon–and destroy the evil at the heart of all the chaos. All of this is illustrated in an attactive pen-and-ink style that’s halfway between medieval woodcuts and modern comic books. 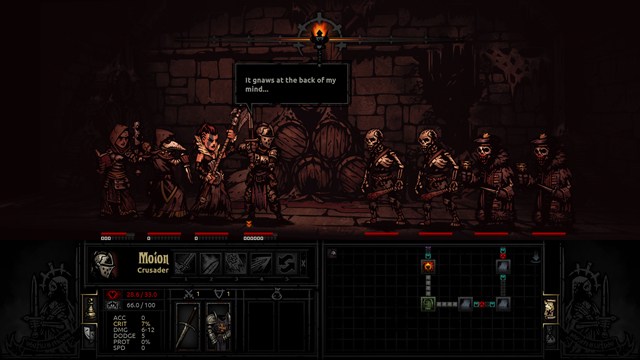 The bulk of the gameplay has you guiding a party of four heroes through their quests, clearing a certain number of rooms or finding valuable grain or just scouting ahead. As you do, you’ll inevitably run into packs of bandits, skeletons, hogmen, fish demons, or a host of other terrible horrors. Battling is turn-based, and each hero has four skills to use at a time. There are very simple exploration segments between battles, and Hamlet offers many activities (that I’ll get deeper into later), but the gameplay revolves around these straightforward battles.

The complexity comes in all the decisions you have leading up to the battles. There are currently 16 hero classes, and four battle positions that you can place them in. Positioning changes which skills a hero can use and which enemy positions they can attack, so that alone accounts for quite a bit of deliberation. But then take into consideration that each class has eight possible skills they can use. If you have a Highwayman, do you want him to stand in third position and pick people off with ranged skills? Or use Duelist’s Advance and Point Blank Shot to have him dart back and forth between first and second, dealing heavy damage at the risk of taking major hits himself? 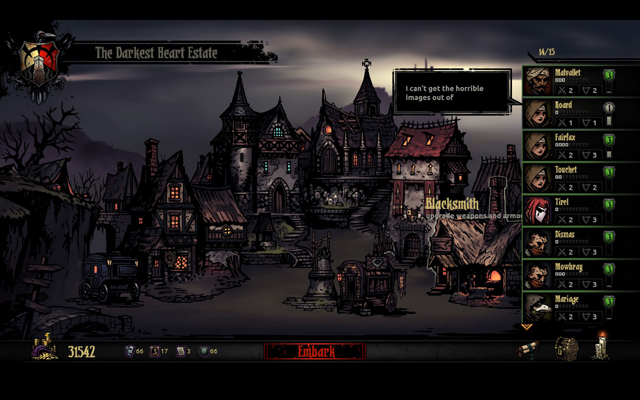 And how have you spent your resources in town? Gold pays directly for services, and the old family heirlooms you pick up can be used to upgrade services. Both are are fairly scarce, though, so you’ll have to make a lot of hard decisions. Increase the number of heroes you can hire, or let the Blacksmith start offering the next round of weapon upgrades? Pay for your Crusader to learn a new skill, or put your kleptomaniac Grave Robber into therapy to solve her issues? If that wasn’t enough to worry about, the terrifying conditions in the dungeons will build mounting Stress in your heroes that persist even after they return to Hamlet.

Stress is probably the most insidious killer in Darkest Dungeon. If a hero’s stress bar fills once, their Resolve will be tested. Sometimes you’re lucky and this test results in your hero receiving a Virtue, but often times, they’ll receive an Affliction. This affliction can lead them to skip their turn, refuse healing, randomly hurt themselves, and cause major stress to their other party members. 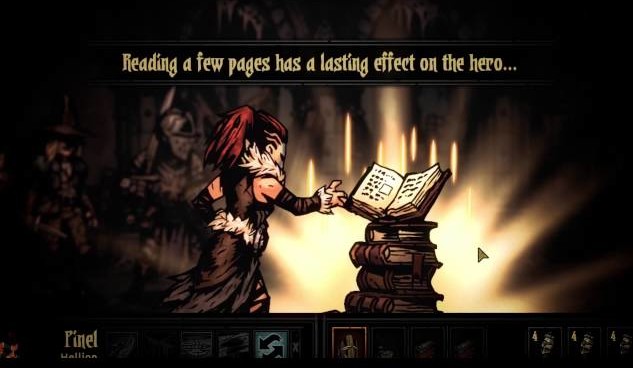 You can easily find yourself in a negative feedback loop as I did, where my Abusive Vestal kept insulting her party until my Crusader became Masochistic, which in turn led her to refuse to change positions with him (she said she knows “his type” would try to touch her). The Crusader’s self-inflicted punishment in turn made my Occultist go Paranoid so my Vestal could no longer heal him, since he was afraid she would poison him. It was disaster, and not at all unlikely to to happen on a harder quest.

That’s not even every decision factor you have to make in Darkest Dungeon (I haven’t even touched Trinkets or Provisions!), but you should get the idea. There is a tremendous amount of customization that goes into every quest, and because all these possibilities are laid out for you very early on, you really feel like your decisions led to success or failure on any given quest. And believe me, there will be a lot of failures. You will be pushed back to the brink of bankruptcy, or lose an incredibly valuable hero unexpectedly. But when you make your small, incremental wins, you feel a tremendous amount of accomplishment. 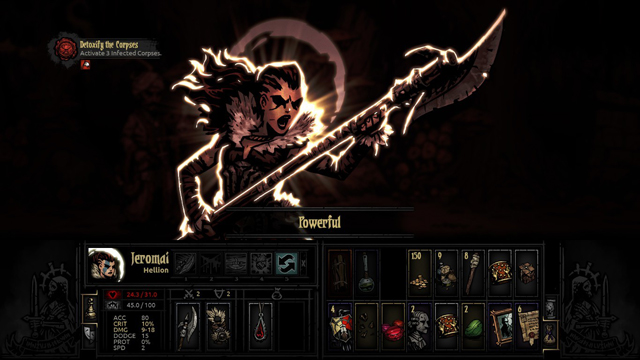 And yet, because the essential gameplay is so simple, you don’t feel overwhelmed from the get go. You understand how all these different things play into the battles. The learning curve has more to do with your understanding of which boons are more valuable at any given time, and what risks are acceptable. Even your worst failures make you want to try again because you’ve learned something, you’ve gotten a little closer to that Darkest Dungeon. It’s a game that challenges you to think hard and think twice, but it’s never unfairly punishing.

How are you enjoying Darkest Dungeon? What are your best stories from the game? Let us know in the comments!