Each week here at Geek & Sundry we’re taking a look at new and upcoming exciting titles on Kickstarter! This week’s Kickstarter of the week is Crusader Kings, a tabletop adaptation of the critically acclaimed computer strategy game. The Kickstarter has exceeded their $57,000 funding goal as of this writing and is currently nearing $400K in funding.

Over the past few years, Paradox Interactive has made a name for itself as the premiere publisher of heavy, just-one-more-turn-what-do-you-mean-its-three-in-the-morning style computer strategy games. The company signaled a move into the tabletop space when it acquired White Wolf properties from fellow video developer CCP Games. It announced a new edition of Vampire: The Masquerade coming out this summer distributed by RPG powerhouse Modiphius. Then they announced they were adapting some of their massive strategy games as board games while simultaneously launching a Kickstarter for the first; the medieval intrigue and warfare of their Crusader Kings games. 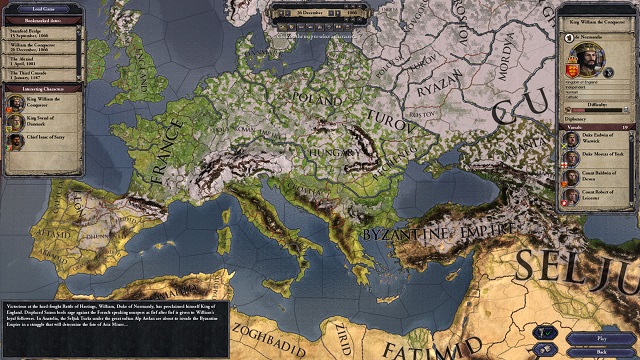 What makes Paradox Interactive’s games stand out is their sense of narrative. Wars in Crusader Kings II are not declared on countries, they are declared on rulers. Each noble has a complex web of relationships with other princes and baronesses. Players taking actions send shockwaves through these webs and the consequences might not play out for years to come after the war is long over and all the crowns involved are long dead.

If this game sounds familiar to fans of George R.R. Martin’s A Game of Thrones, it should. The time period covered is the same historical era that inspired Martin’s complex tale of betrayal and battle. (There’s even a fan mod for the game that replaces Europe with Westeros that fans of both love. The Crusader Kings games require people management and domain management while offering a variety of options, from giving out fake titles to stroke egos to hiring assassins to kill rivals and then using the death as an excuse to invade and protect their children until they come of ruling age. 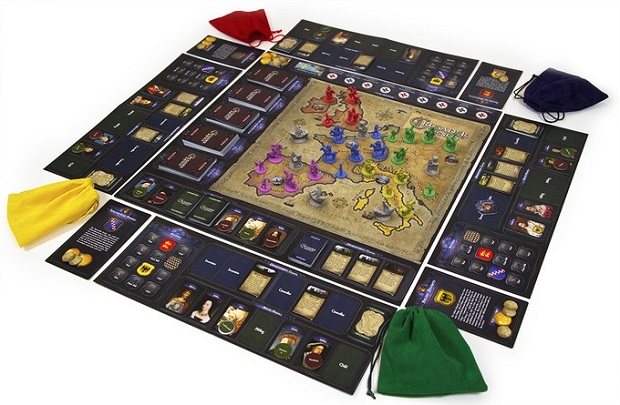 How, then, do the designers hope to translate a massive game like this to the tabletop? One of the most innovative mechanics involves passing traits down a royal line. In the computer game, children take traits from both parents that affects how they rule and changes their relationship. These traits are placed in a draw bag in the tabletop game as the royal line adds more members through birth and marriage. These traits are divided into two categories; positive ones like Kind or Brave and negative ones like Angry or Cruel. Many actions require a draw out of the bag of a positive trait to be successful. Some specific actions have critical traits that can count as a success even if they are negative; a Cruel regent is more likely to succeed at murdering a fellow noble in cold blood.

This means careful marriage and selection of traits for you heirs is important, as the game plays out over three generations. Players aren’t just playing characters; they play out those character’s children, and their children. There are three ways to win the game in the basic scenario; sweep your enemies off the board through conquest, send your best and brightest heirs on a crusade and hope they survive to the end, or last three generations and total up the most victory points.

The Kickstarter is fairly simple. One level gets the base game while the other includes bonus miniatures unlocked to represent advantages of each kingdom. Stretch goals unlocked to benefit all backers include a larger game board (for more plastic warriors to battle), additional game scenarios and an AI for solo and two-player modes for those days when the whole clan can’t get together to scheme. The change to get bonus plastic ends when the Kickstarter wraps on June 19th, so if you want to play the game and take the throne, you need to gather your resources before then.

What Kickstarter games have you backed recently? Tell us about them in the comments!