For decades, geeks like us had to play tabletop games under the proverbial table. There was a stigma that went along with rolling D20s on a Saturday night instead of going to clubs. While the popular kids told us to be ashamed, secretly, we were proud of our creations and excited to play the next adventure. If anyone understands the love of being imaginative, it’s Critical Role‘s own Liam “Vax’ildan” O’Brien. Liam is known for his animation and video game voice over performances including Gollum in Middle Earth: Shadow of Mordor, Illidan Stormrage in World of Warcraft, and Nightcrawler in Wolverine & the X-Men to name a few. I sat down with Liam (and by “sat down” I mean “emailed”) to find out how his love for Dungeons & Dragons evolved into an internet sensation.

Geek & Sundry: Can you tell us a little bit about yourself and who you play?

Liam O’Brien: I play Vax’ildan, the group’s rogue. I am a loooong time fantasy geek, and have been extremely lucky that I’ve been able to bend my acting and directing career back around to all the things I loved so much as a kid. I was daydreaming about being a half-elf in grade school, so the last several years have just felt like coming home.

G&S: How were you first introduced to tabletop roleplaying games? 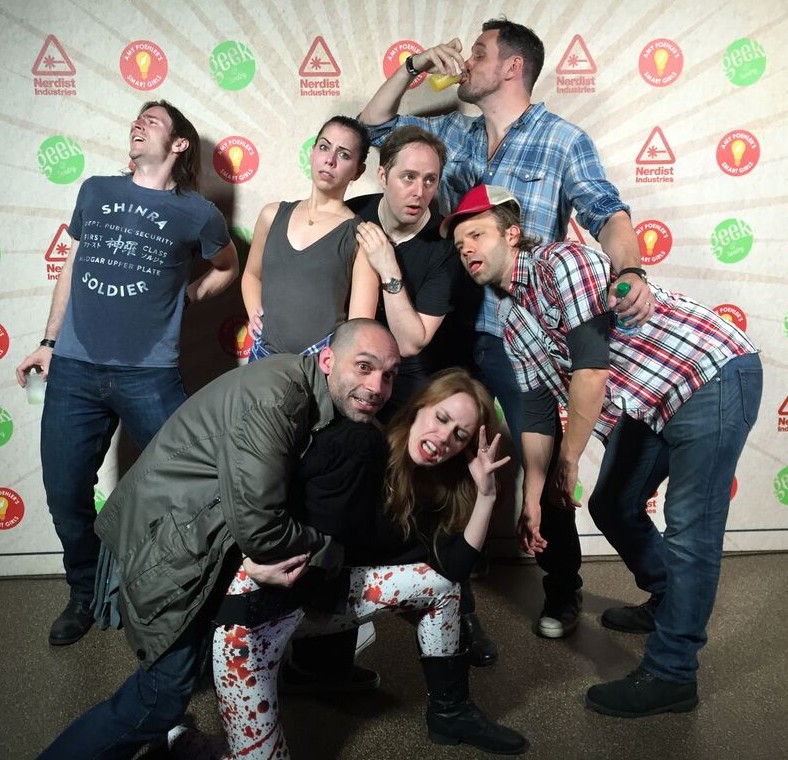 LO: I remember this very vividly. Back in 7th grade in the little Catholic school I attended, a new student in the class came in one day with a brightly colored box sporting a picture of a warrior and a dragon on it. He was holding the iconic D&D “Red Box” that was the gate way drug to so many new players back in the 80’s. He was cool enough to lend it to me for a few days. That weekend I took it home and devoured every single page of it.

At that point, I just started collecting books and reading them cover to cover. I think by the time I got the red box, it was actually a little behind the curve, and book store shelves were then stocked with the Advanced Dungeons & Dragons books. There wasn’t anyone in grade school I felt comfortable enough to approach about playing. That all changed when I moved on to a larger high school and started meeting people with similar interests. I ended up running a game with three friends. We sat around my dining room table, slaying dragons and collecting magical artifacts. I left D&D behind after high school. Once I got to school in NYC, I was a “very serious actor” who intended to do “very serious work.”

G&S: Do you tend to play rogues? What about them appeals to you?

LO: I think the love of rogue types set in later in life. Back in my youth, when I was dodging football players in high school and figuring out who the hell I was, I was more drawn to straight up fighters and magic users. I wanted to be the guy that waded into the middle of things and mow down orcs. But somewhere along the way, that shifted. Maybe part of me feels like this is the role I would actually slip into were I boots-on-the-ground in Middle Earth. Or maybe I’ve just played too much Metal Gear over the years.

G&S: How did the Critical Role group find each other and decide to play D&D?

LO: You can blame this one on Sam and me. We started a podcast back in 2012 in an attempt to hang out together more. He and I have known each other a lot of years, and both came up in the VO ranks at the same time. We also hit fatherhood fairly close together, and began to see each other less due to all the hoopla of being a working adult with kids. The podcast, called AllWorkNoPlay, revolved around us forcing ourselves to do something fun together every few weeks or so. Early on, I suggested we rope in some of our acting colleagues to play a one-off night of Dungeons & Dragons. Matt had actually tried in the past to get me to play in a game he was running when I was directing him for a video game project. I had a brand new baby at the time and didn’t bite. Jumping ahead to 2012, I called up Matt, we rounded up the rest of our cohorts, and the rest is history.

G&S: How did you develop Vax’ildan’s backstory? And why did you decide to play twins with Laura? 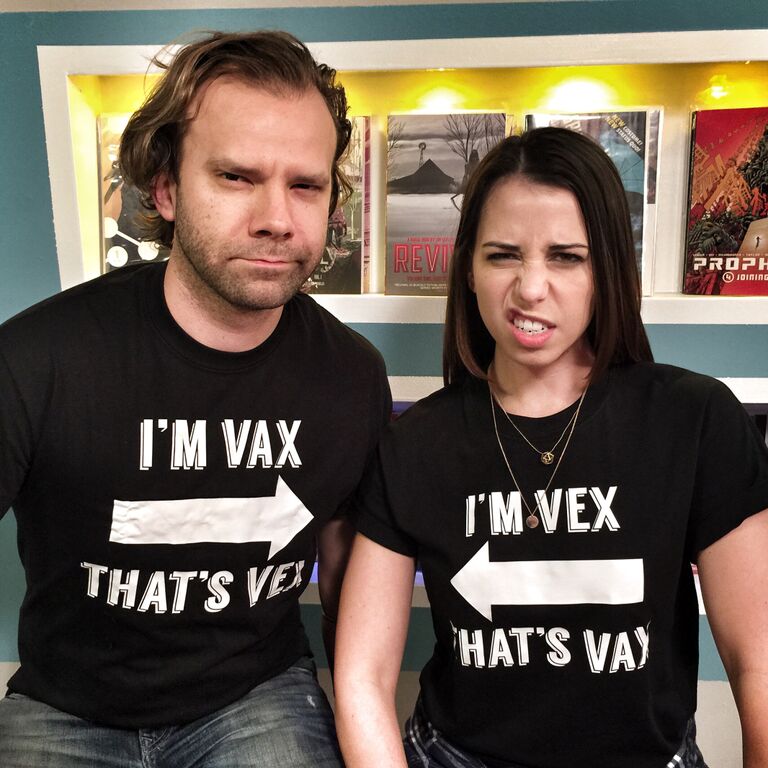 LO: So back in the beginning, when I picked rogue and Laura went with ranger, we settled on the twin idea, thinking it would be a fun detail for our little “one-off game.” But then things kept going. So before our second game, we fleshed their story out a bit more, creating the dynamic that we would play with for the next two and a half years. Later, when we knew the show was really and truly happening, Laura and I met up at a diner and spent several hours talking everything out, going over every little detail of their past.

After that diner visit, I took all our notes and organized them into a document to send off to Matt, so he could integrate it into whatever voodoo he does. I cut and pasted it all into an email, typed in “Matt”, and hit send. The bad news is, I sent this scrawling document to the wrong Matt. The good news is, Matt Colville, a writer at Turtle Rock Studios, happens to also be a long time DM:

I fear that of the D&D DM’s you know, named Matt, you have emailed the wrong one.

I can tell this because in my setting Elves and Humans can’t just mate any time they feel like it, because that doesn’t make any goddamned sense and it’s not what Tolkien meant by “half-elven.” In my setting your parents would have had to petition the gods to bless their union! As is right and proper!

But I can answer your questions anyway! Your father’s name was Vexikalisax, whence comes the root of your names. That was his only legacy to you. Because you bear his name, even as half-caste, the Elves will have to grant you some hospitality, though they will not like it.

His wife was Iridilex, who would probably plot to have you killed if she found out you were still alive. Your half-sister is Irilinor, she may not bear as much hatred toward you.

Your father was the Lord of Thorns, which is the equivalent of like the head of the FBI in Elven Town.

G&S: Why does Vax always seem to be the one getting in trouble?

LO: Part of it is that I know this is a game, and if I can’t leap in and do heroic/stupid stuff here, I’m not sure what the point is. But I think over time that has also evolved into Vax feeling that the people in this group are his family, every single one of them. They may argue or butt heads from time to time, but when it comes down to it, he’s prepared to sacrifice himself to save any and all of them.

G&S: What are some things you discovered about Vax as you played the game?

LO: I didn’t have a solid idea of Vax on day one. I think early in the game, I just knew he was eternally loyal to his sister, and didn’t have much of a purpose in life. But that’s been changing over time, little by little. In the beginning we were really just well intentioned swords for hire. But the longer we do this, I think Vax is leaning away from selfish motivation, and is now deciding that isn’t enough anymore. He’s looking at the world around him and realizing that it needs heroes.

G&S: How has your bond with the other players grown through this game? 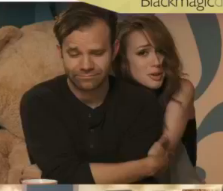 LO: There’s something to be said for the fact that we are getting together once a week now to simply play pretend with one another. You know, when you reach adulthood and all the responsibilities that come with it, that joy of limitless imagination often feels a long ways behind you. When I look back at my childhood, and the games of make believe I played with my very first friends, the memories that come back are magical. It’s a big part of why those early friendships are so special. This group is the closest thing I have  ever felt to that old magic. And I’m saying that as a person who gets to play make believe on a weekly basis as part of my job.

G&S: How has the community response surprised you?

LO: We loved what we were doing, but whether it would translate well onto a screen, for 3+ hours an episode…we had no idea what the response would be. Months down the road, I still feel pretty amazed by it all. The weirdest part is that this fictitious world of people and things that only we had been able to see in our own skulls before now exists in the heads of so many others. It’s a total Frankenstein moment, cuz it feels like we straight up brought something to life. Every time I see some amazing fan’s rendition of one of the party, I’m jolted by the fact that a character that existed solely in our imagination is now looking back at me. Realizing that the community seems to love this story as much we do ourselves has been amazing.