Critical Role: Percy's Soundtrack - Number One with A Bullet - Nerdist

Critical Role: Percy’s Soundtrack – Number One with A Bullet

Every hero needs a good story, a monster to battle, and a kicking soundtrack. Today, we’re handing over the radio controls to the members of the Critical Role team so they can set you up with some of their favorite tunes and pieces of fan art to get you into a mindset for adventure. We kick things off with everyone’s favorite gunslinger, Percy, played by Taliesin Jaffe. Check out our full interview with Taliesin Jaffe or catch up with the latest episode of Critical Role on Geek & Sundry.

I love music and making playlists. More than a few of these songs were in my original music folder when I was first writing the film pitch that became Percy. I tried to make sure no one would know every song on this list, so I hope you enjoy the surprise. And the angst… and depression.

“Bang Bang” – Nancy Sinatra
A beautiful cover of the Cher song. The first song I remember using a gunshot as a metaphor for heartbreak.

“Far From Any Road” – The Handsome Family
Sets the dark occult western theme in motion. A spiritual experience far from civilization, a psychedelic murder ballad for one. I know this song was used as the opening for True Detective, but in my head I see El Topo Part 1, a film that powerfully influenced the creation of Percy.

“Just the Right Bullets” – Tom Waits
I don’t think I’m capable of making a playlist without Tom Waits. Thankfully, in 1990 Tom helped reimagine the classic German opera Der Freischütz as The Black Rider. The basic story is a Faustian pact between a Huntsman and the Devil for magic bullets that never miss. As it is in all German fairytales, everything turns out fine.

“Faded Coat of Blue” – Jolie Holland
I feel like a clever jerk re-purposing a civil war song, but there you go. Also in this particular character vein, the movie Dead Man. Enjoy the feelz.

“Crow Jane” – Nick Cave & The Bad Seeds
The folk Character “Crow Jane” is usually the victim in the song, so Nick Cave sets her at the other end of the pistol for once. What strikes me in this story is how well it paints the starkness of the events. There is nothing to be gained by revenge. There is no justice, no honor, no sanity. Just a few aftershocks to punctuate the central horror.

“Kill That Man” – Jason Charles Miller
Jason Miller does more than just write cool opening title music, you know. He is also the man who taught me to love country again. With this song, it’s worth remembering that vengeance is a selfish act. And after you read this you’re gonna go watch Jason’s “Kill the Pain” video and look for cameos.

“You’ll Have Time” – William Shatner
The captain, with little explanation needed. True on so many levels.

“I’m Not Okay” – My Chemical Romance
Oh, Keylith, I appreciate that you try.

“This Corrosion” – Sisters of Mercy
The little goth kid in me loves the dark rock romance. Long coats, anime hair, and angst! My god I’m sorry this song is really long.

“Pink Summer” – Summer Camp
Percy on Vox Machina. Thank you all for playing. 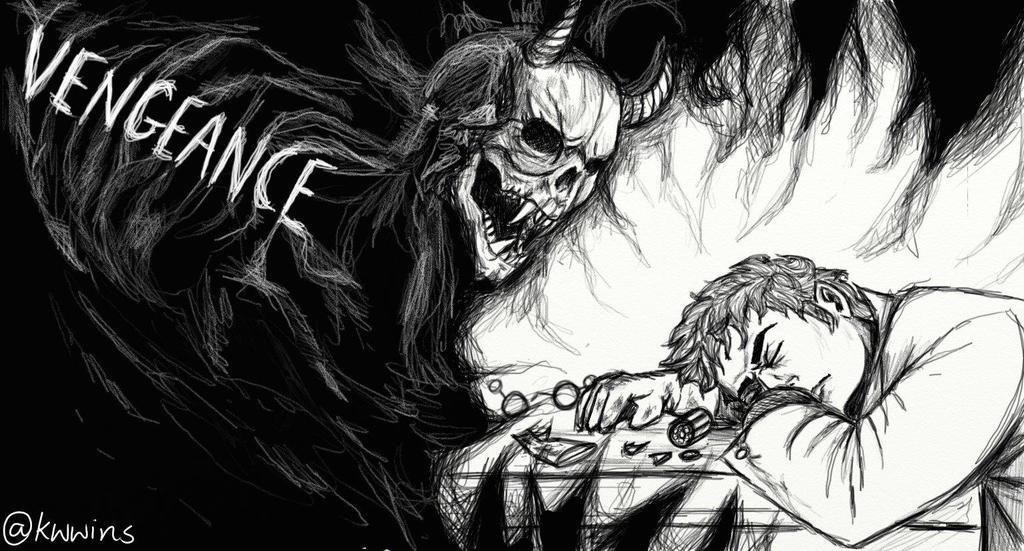