Not everyone can successfully combine quirky charm and adventure, let alone do it in two award winning comics. But then again, not everyone is Noelle Stevenson, one of the writers on Lumberjanes and the creator of Nimona. While her name might not be at the top of your list, it soon will be as you dive into her world of real people taking on mystical quests filled with danger and often giant explosions. The people Noelle writes about are far from perfect, but it’s often their imperfections which makes them endearing and human, traits you often have to dig for in the inked stained stands. 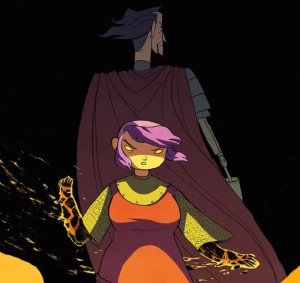 Last year, Lumberjanes became my go-to suggestion for friends looking to get back into comics with something a little different. This modern day Goonies with a dash of punk rock feels fresh and smart as our five heroes from the summer camp for “hardcore lady types” take on monsters and other mysteries. Noelle Stevenson along with Grace Ellis and Brooke Allen mange to create a group filled with characters that stand out as individuals rather than broad generic strokes of the pen. There’s even a mixtape prepared by each of the characters at the end of every issue. Starting out as a limited run, the series exploded on to the scene with fans demanding more. Boom! Studios quickly answered their demands by turning the comic into an ongoing series.

Before heading out to Miss Quinzella Thiskwin Penniquiqul Thistle Crumpet’s Camp, Noelle worked on Nimona, a story about becoming a sidekick to supervillain. This award-winning web comic follows the exploits of the shapeshifting title character as she works up plans with Lord Blackheart in order to take down the knight, Ambrosius Goldenloin. Among the fantasy and explosions, there’s really an interesting story here of the bad guys trying to protect the kingdom by exposing the good guys. You don’t have to look hard to find the fun adventure elements of Jumberjanes mixed with deep characterization. If you are a little curious about the web comic, you can check out the first three chapters online at Stevenson’s site. For more, you’ll have to pick up the book.

In only a couple of years, Noelle has gone from art student to breakout hit. Read anything she touches and it’s not hard to see why she’s such a sought after writer. Interesting characters, rich worlds, fun adventures; it’s these elements that readers have longed for in much of the mainstream comics today, and Noelle has found a way to do twice. People are starting to take notice — especially Marvel. Just this year, Noelle got her hands on Thor Annual as well as Runaways.

If you are heading out to Comic Con ’15, you can catch her at the the BOOM! Studios booth or at their 10 Year Birthday Bash. Get ready to put another name on your “must read” list. Noelle Stevenson proves that complex and imaginative characters can still be fun. Friends to the MAX!