Let’s start with my big Star Wars fandom confession: I’ve always been meh on Jedi. Lightsabers are cool, and the Force is central to what makes Star Wars awesome, but I always perked up a little more whenever someone would hop into the cockpit of a spaceship and blast off to adventure. Han Solo was at the top of my list. The Millennium Falcon, hunk of junk she might look like, flies with such grace that being temperamental and hard to maintain might be worth it. I’ve dreamed of a game where I get to rub shoulders with the grimy side of the galaxy staying one step ahead of the Imperials and two steps ahead of the crime lords I owed money. Star Wars: Outer Rim offers that experience and more.

The game is a pick up and deliver experience at its heart. Players choose an iconic Star Wars rogue as their captain and start out in one of two generic ships. You shuttle cargo from one place to another to get money, upgrade their ships, hire crew and build their reputations. The game ends when one player has earned a preset amount of fame points based on the desired game length. Planets offer a variety of encounters plus contacts who provide opportunities that are more story based. Find Princess Leia on Lothal, for example, and she might offer that player a job based on their reputation. 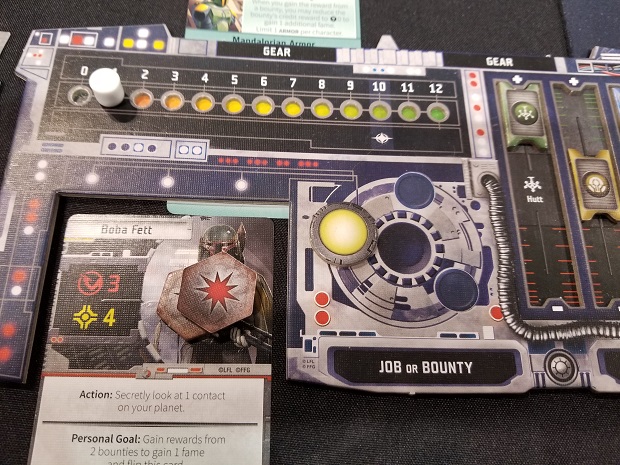 There are four factions in the game that players have to maintain reputations; Rebels, Imperials, Crime Syndicates and The Hutts. The management is simple; either the player has a positive, neutral or negative reputation, but the challenge comes in with how those reputations interact with cards. Sometimes a positive reputation with a faction will offer opportunities at better jobs…or it might cause a player trouble with another faction. Accepting a job from one faction often boosts reputation with them while lowering reputation somewhere else. The reputation mechanic offers a bit of replayability and flavor. Running into a faction that doesn’t like a player brings that feeling of someone walking into a cantina and the player suddenly looking for a back door.

For those who are bored at the idea of simple cargo hauling, bounties can be found on the various planets throughout the galaxy to add to fame totals. Bounties requires a quick dice duel to resolve but can be cashed in on the spot or hauled to the planet where the bounty was first offered. The bounties correspond to face down contact tokens on the board. These tokens also offer their own missions and might end up as crewmembers on other player’s ships. Bounty hunting adds a bit of deduction and interaction to the game, since another player might turn up a bounty while seeking out contacts.

Upgrading the ship also offers some great opportunities. Players can modify ships to their playstyle in addition to buying new ships. Both ships and captains have goals that unlock better versions of themselves. There are a lot of YT-1300 freighters in the galaxy, but completing the ship goal makes the one on the table The Millennium Falcon. It can be a little strange seeing someone like Boba Fett flying the Falcon, but part of the fun of playing FFG board games like this and Rebellion are the strange alternate canon that comes up in play. 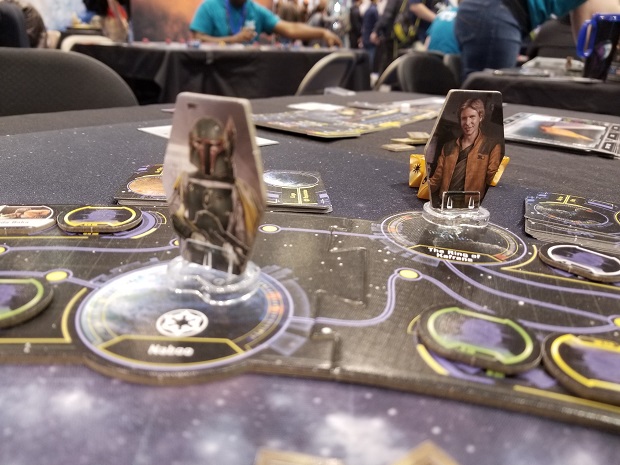 My main complaint about the game is that it’s obviously being set up for an expansion. There’s a big gap in the numbered storyline cards and the community job cards can cycle through in a single game session. It’s an unfortunate nod to the economics of board gaming that games are often planned with expansions in mind.  Star Wars: Outer Rim captures the smuggler’s experience well, but I hope to see an expansion sooner rather than later for it to stay at the top of my must-play stack.

It’s nice to see licensed board games that aren’t just re-themes of existing ideas. It’s an exciting time to be a Star Wars fan and Star Wars: Outer Rim continues the excellent thematic board games that have come out on Fantasy Flight’s watch. It hits a middle ground between the deep play of Merchants and Marauders and the stumble around joy of Firefly: the Game. Fans of the fringe side of the galaxy should definitely take it for a spin.

Rob Wieland is an author, game designer (Star Wars RPG, Firefly RPG, Camelot Trigger) and professional nerd. who occasionally tweets and livestreams RPGs with the Theatre of the Mind Players while his meat body resides in scenic Milwaukee, WI.