GM Tips Our series to help Storytellers and Game Masters improve their craft and create memorable roleplaying experiences. Last week, we’ve recruited your players into different factions, so let’s throw them out into the world with monsters!

With Mordenkainen’s Tome of Foes being launched a new wave of monsters are ready to terrorize your players. What if you don’t run Dungeons and Dragons or want to make your own compelling beasts instead? A monster, defined as a near-mindless force of single-sided destruction, is a common trope found in most role-playing games. A different classification from the Villain, a cunning or even sympathetic nemesis to the party, monsters typically last a single encounter and then are sold for parts on the black market.

Even Fractal Nanomachine swarms in Eclipse Phase, or Vozhd in Vampire: the Masquerade are giant sponges for damage meant to wreak havoc on your parties resources—either to send them running, or amp up the threat of the environment. So let’s talk about ways we can make these monsters stand out a little more than giant blocks of hit points.

Legendary Creatures in 5th Edition Dungeons & Dragons have some amazing lair and environment effects that truly enhance the encounter, but they are still combat oriented more often than not. If you want to build up a monster, you’ve gotta remember it exists to disrupt the natural order of things. Leave signs of the creatures devastation around, tufts of hair, piles of digested enemies, or power outages along city blocks.

Describe the monsters footprint in a way you know will get at your players; perhaps a wounded dog limping along barely surviving, or have the creature drool and ooze right between their armor. Savor the sick flavor as their acidic saliva slips between their chain mail and causes blisters and pimples to pop and ooze. Monsters are not often part of the natural environment and remembering this fact will help you storytell for them. Play up the disruption, the chaos, and the food chain dynamic as a new alpha predator enters the area and your encounter will become more memorable. Even if it’s a beast that was just summoned into existence—describe the silence of all insects and birds stop chirping. Have the environment react to the monster, instead of the other way around; this subtle power dynamic shift sets the stage. 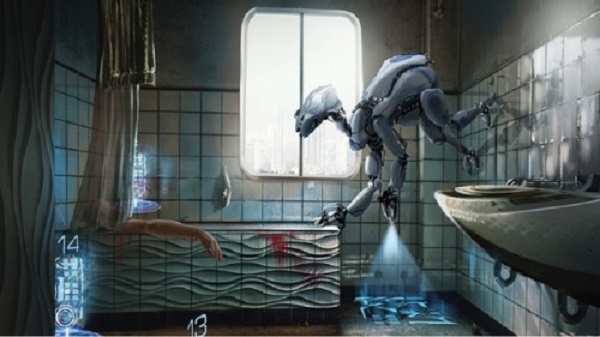 Power creep is a factor in all games, and it’s no surprise few games ever make it past that ‘tier 2’ threshold in any system. Right when monsters start becoming powerful and forces to be reckoned with on their own, is the same time player characters start becoming creatively broken. The power imbalance has put GM’s in a vice grip for decades—throw countless hit points on your single monsters and the fight becomes boring or deal with players who kill your creation in one hit.

There is a third option that is often used for main villains, but not for monsters—having them regrow later. Much like Hellboy’s Ogdru Jahad, just because it dies at the moment, isn’t the end of the creature. If you plan on your players killing your creatures, you can open up a whole different story-line of wonder. Where do they come from? How many clones are there? Is the next version upgraded by a mad alchemist? This is a particularly handy trick if you have the monsters learn from the players tactics as well for next time and creates a sense of growing menace (or comedy) each time they show up.

Vampires and wooden stakes, werewolves and silver bullets, and changelings with cold iron are all defining traits of monsters. It took all hands on deck when Shin Godzilla was defeated through the injection of a special cold chemical in his bloodstream and your monster could be no different. If you want to invoke long-lasting fear, rather than a single combat over a few hours, over-power your monster in amazing ways but give a silver bullet weakness that the players have to discover.

This turns your monsters into a living walking puzzle that needs to be solved. While it rampages in a town, stepping on buildings and leaving ruin in its wake, the players scramble to assemble the pieces or discover the best means to take it down. Depending on how you implement this, it can flavor the entire encounter. For example, you have a swarm of nanomachines devouring Seattle and your players have to break into a megacorporations server banks for the right password to shut them down. This turned the monster encounter, into a heist mission. Or you could have a Japanese Oni terrorizing the land, and only swords made of Jade and blessed by a priest will bind it for another century. How you define a creature’s weakness, can set the tone for a variety of unique and compelling monster battles, so don’t hold your imagination back.

What are some of the best monster encounters you’ve ever had? Tell us your story in the comments below!