Control New York in The Godfather: A New Don - Nerdist

Control New York in The Godfather: A New Don

Tackling a large intellectual property can be challenging. With such an iconic film as The Godfather you have to be careful where you step. But that basic issue of how you approach it is the main hurdle. Most designs would throw in noteworthy characters like Sonny, Fredo, and Michael and try to re-enact specific moments from the film. A New Don takes an entirely different approach in gutting out the specific details and instead presenting a compelling situation of families vying for control of New York.

In many ways this cuts straight to the heart of Godfather’s theme. You’re clawing your way to the top and fighting the vindictive cut-throats clinging to your coattails. It’s a social game with bad Italian accents and open threats. It’s relatively simple and straight forward yet it’s incredibly smart.

This is a 60 minute area control board game with straightforward goals. You’re fighting for influence of the most neighborhoods in a larger area of the city. Whoever has the most ‘hoods in each area scores the largest point value, with second and third gaining fewer respectively. This dual layered approach plays out as an interesting twist on the standard structure of this type of game.

The beautiful side effect is that you get a bit of an arms race feel as each smaller neighborhood doesn’t gain you additional points. You want to maintain your grasp on the fewest amount possible while still holding a lead. This incentive structure means that typically no one has a huge immovable position on an area and you can always fight your way back into contention. This is simple yet extremely clever.

How you actually claim neighborhoods is one of the most interesting elements of the design. Each turn you roll a set of standard six-sided dice behind your player screen and keep the values hidden from the others. You then choose one die to offer to the Godfather–a temporary position of strength that can change hands. The boss decides whether to take each player’s die payment or make them an offer they can’t refuse. Yeah, now we’re talking. 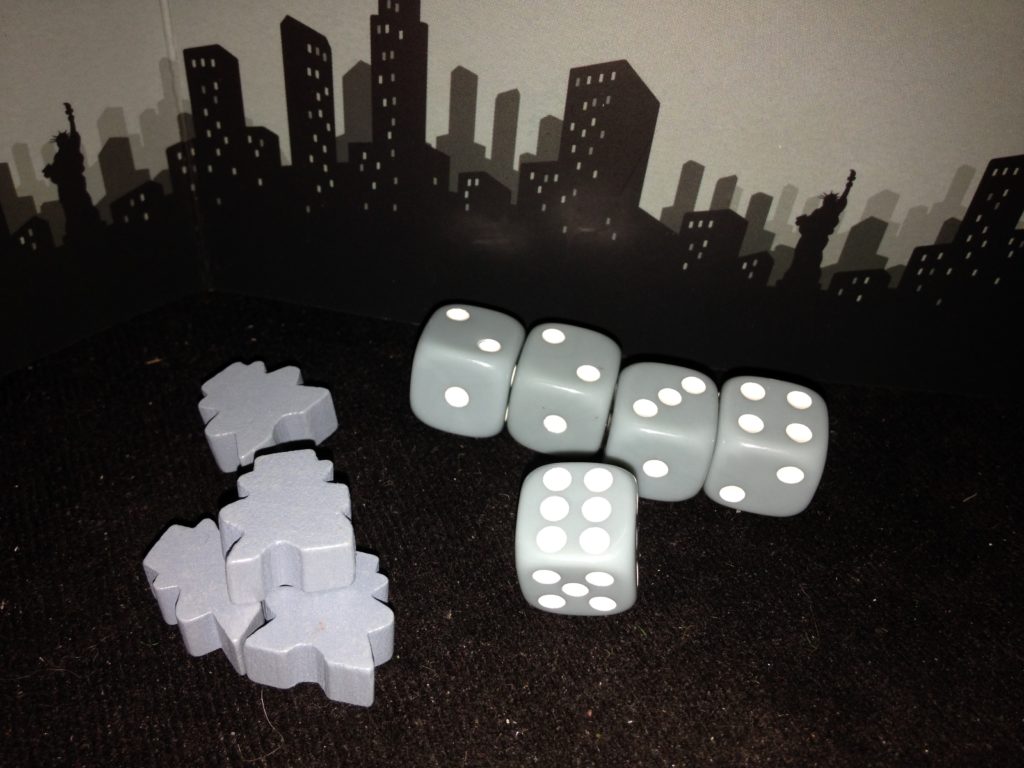 Instead of taking the die in front of the screen the Godfather can name any other value. If you have that number hidden from view, you have to cough it up. This occurs clockwise as the G-F gathers a possibly large swathe of dice to utilize. This simply feels good as you’re taking payment and kickbacks from your crew, exerting your power thematically yet directly in a chief mechanism of play.

In player order, each participant now spends all of their dice to place their gangsters into different parts of the city. Some areas require you spend a trio of the same number, others require straights. It’s simple and elegant as you have a few options, but it never overwhelms.

Alternatively you can spend dice deploying thugs to the Vegas spaces on the side of the board. Each round the current Godfather rolls a set of special dice, and if any come up with the number you’re occupying then you grab them for the current turn. This is a nice touch of drama in the design as you place resources hoping to cash out in the future. Watching those dice roll every turn is like participating in this miniature game of craps where you’re pulling hard for your numbers.

The final use of your dice is jumping forward on the muscle track. This important vector determines who you can displace on the board and who the Godfather is for the following round. This highlights the multiple paths to controlling areas in the game as you assert tempo and influence pacing. Spending a turn to entirely bump yourself up the muscle track is still satisfying because you’ll be granted a bevy of dice from player offerings in the following round.

While A New Don has an immediate impression of relying on extreme randomness, that’s far from the truth. The reality is that dice can be spent in so many ways and luck mitigated, that your decisions and how you move within the flow of the action are the real determinants to success. Strategy can sometimes feel a little opaque for the weight of the game, but it never feels unfair and you never feel lost.

The most remarkable aspect of this design is how everything is simultaneously so tight and loose. Several elements add drama such as dice based placement, Vegas payouts, and seizing the muscle track. Yet, the game offers a really exceptional system that forms a loop of satisfying feedback. You roll dice, push them out to the board, have them get kicked out, and get rewarded. When you’re dice are displaced and when they are snatched by the greedy Godfather, you place a thug in a favor space on the board. These favors can be spent to modify odds and influence your roll, increasing your effectiveness. 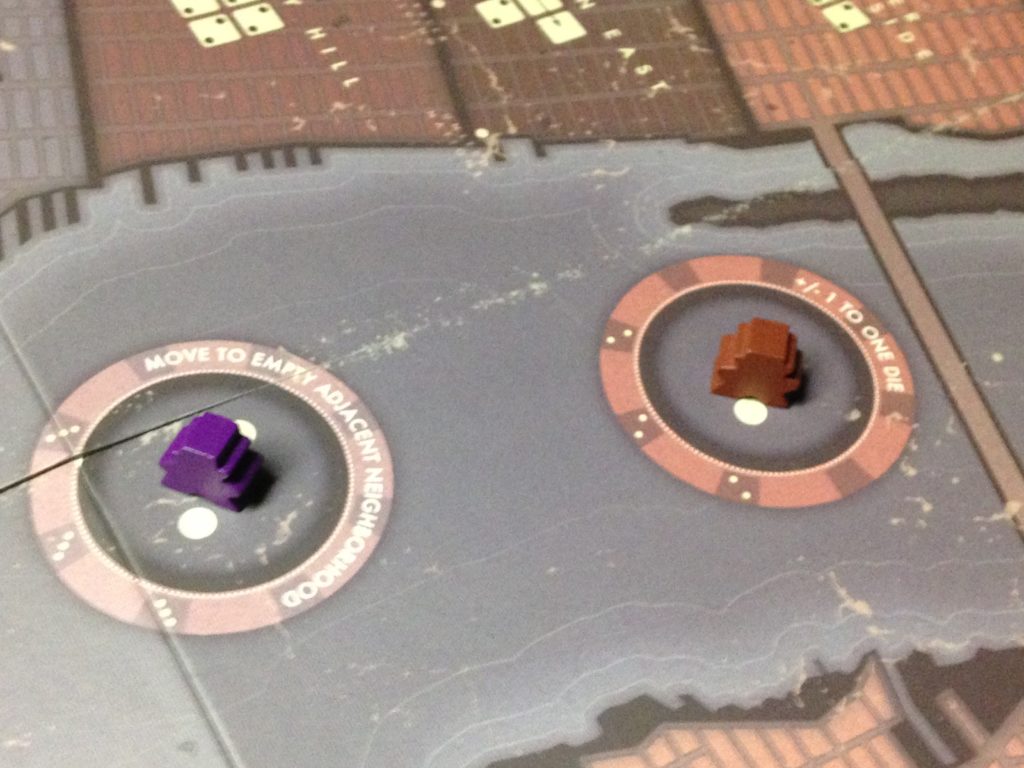 The result is that die lifecycle continually feels enjoyable to interact with as you’re never on the downside or getting kicked. Whatever occurs has a positive aspect and it keeps everything level emotionally. I really can’t emphasize too much how central this is to the fuzzy warm center of the design and why this game is so outright fun.

The Godfather: A New Don may not be the most thematic release from an engrossing setting perspective, yet it certainly embraces its deeper thematic framework by invoking a feeling of power and significance. Threats are issued, dice are stolen, and that central loop gives you a hearty embrace. There are not a lot of options in this lighter weight area control sphere, and A New Don certainly affirms its position as the boss.


Are you a fan of The Godfather? Any interest in checking out The Godfather: A New Don? Let us know in the comments below!