Whenever there’s a real life health epidemic, we often collectively turn to fictional narratives as a way of understanding them – or maybe just coping . Back in the ’90s, when the Ebola virus terrorized worldwide populations with an extinction-level plague, audiences flocked to theaters to watch Dustin Hoffman and Rene Russo fight a fake version of the virus in Outbreak. Of course, more recently the The Hot Zone mini-series focused on the actual Ebola virus and the repercussions of it spreading. 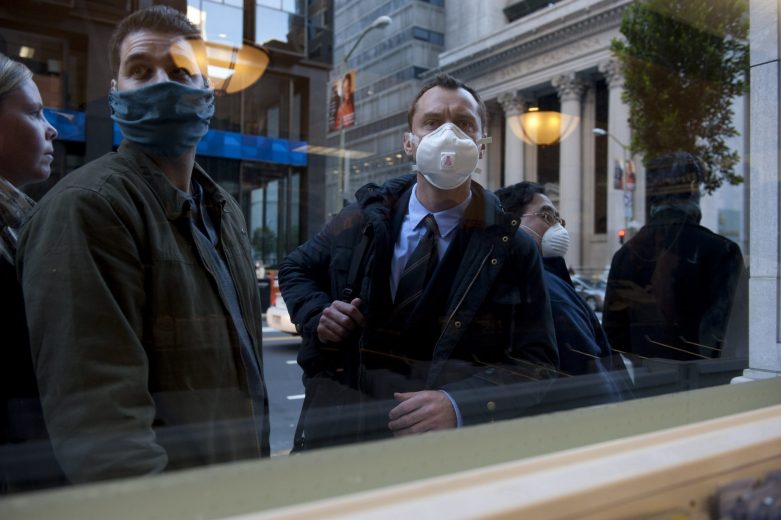 But the current health epidemic currently panicking everyone is the Coronavirus. After first identifying it in China late last year, doctors have recorded 6,171 confirmed cases of the virus, leading to 132 deaths. Meanwhile, only three known cases were identified in the United States as of right now. And as populations steel themselves for another epidemic, they once again turn to fiction for ways to identify, comprehend, and maybe be entertained by a simulation of that impending danger. According to The Hollywood Reporter (via Slashfilm), Steven Soderbergh‘s 2011 film Contagion entered the top 10 on the iTunes movie rental chart on Tuesday January 8th at the number 10 spot, alongside recent hits like Joker, Once Upon a Time in Hollywood and Parasite.

In Soderbergh’s film, Gwyneth Paltrow plays an American who develops aggressive flu-like symptoms after a business trip to Hong Kong. But she and the rest of the world quickly discover that it’s some kind of super virus, as it spreads like wildfire across the country. By the end of the film, some 2.5 million North Americans die before scientists can develop a vaccine. Soderbergh conceived the movie with screenwriter Scott Z. Burns (The Report)  in the wake of 2000s epidemic scares like SARS and the Bird Flu. Paltrow leads an all-star cast featuring Marion Cotillard, Bryan Cranston, Matt Damon, Laurence Fishburne, Jude Law, and Kate Winslet. Unlike her Marvel films, Paltrow probably remembers making this one, since (spoiler alert) she not only dies but gets graphically dissected during an autopsy.

The original report indicates that “Google searches regarding Contagion’s availability via streaming began spiking late last week. By Monday, it rested at No. 13 on the iTunes chart before landing at No. 10 the next day.” I don’t know about you, but if I were truly scared about deadly viruses, the last thing on Earth I would watch is a Doomsday scenario movie about an extinction-level health crisis. But perhaps living vicariously through characters in a fictional scenario — especially one heavily researched and broadly fact-driven as the events in Soderbergh’s film — might offer some insights into how best to prevent or avoid catching something in real life. (Some of its presented stats, such as the number of times we touch our faces per day, are not only based in truth but genuinely surprising.)

But as realistic as Contagion may seem, it’s best to remember that its story is a work of fiction, and should not be used as a guidebook for protecting oneself from a true epidemic like the Coronavirus. Of course, why people would look to that movie — or any Hollywood virus movie — for tips in an outbreak remains baffling. But even if pure, morbid curiosity drives the recent increase in the film’s rentals, watching widespread disease and death portrayed on a global scale, there’s something reassuring about keeping those health risks quarantined in the realm of the imagination.