Join Taliesin Jaffe, Amy Dallen, and Matt Key on The Wednesday Club, your source for everything comics! Watch live every Wednesday at 7:00 PM PDT on Alpha and Twitch.

In the early days of role-playing games, there were several different series that tried their best to convey the joys of navigating a story where the reader had the decision on how things went in their own hands. Many kids of the 80s experienced this through the legendary Choose Your Own Adventure books, but a few series went towards the deeper end of D&D emulation. Lone Wolf, Fighting Fantasy and Sagar the Barbarian were among the titles that included things like randomized combats, equipment management , nd character development.

The form lives on in several mobile apps, but the resurgence in the popularity of Dungeons & Dragons has given some big name publishers a chance to revive the form. Marvel Comics is releasing a miniseries next month called You Are Deadpool where readers take on the role of everybody’s favorite Merc With A Mouth. Not only is it a cool publishing experiment that just so happens to coincide with the release of Deadpool 2 in theaters on May 18th, it also allowed the creative team to whip up some alternate covers as a tribute to the tabletop RPGs that inspired them. We collected all five variants here along with the covers that inspired them, plus a little bit of discussion on why Deadpool would love to play these games when he’s not talking trash about the entire Marvel Universe. 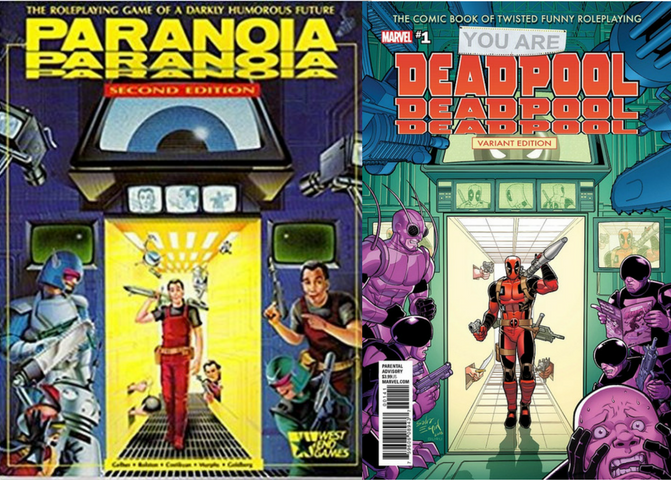 The Game: West End Games’ Paranoia. This satirical RPG is set in the futuristic Alpha Complex run by a paranoid computer. The players are Troubleshooters looking out for Commie Mutant traitors…except every character in Alpha Complex is a traitor of some sort, including all the PCs at the table.

Why Deadpool Would Love It: Paranoia is a game of wanton violence and dark humor. It fits Deadpool’s sense of humor to a T, even allowing for several clones of characters to allow everyone multiple versions of spectacular deaths when their traitorous natures are exposed. Deadpool’s amazing healing factor would allow him to describe these deaths in detail because he’s probably gone through them all. 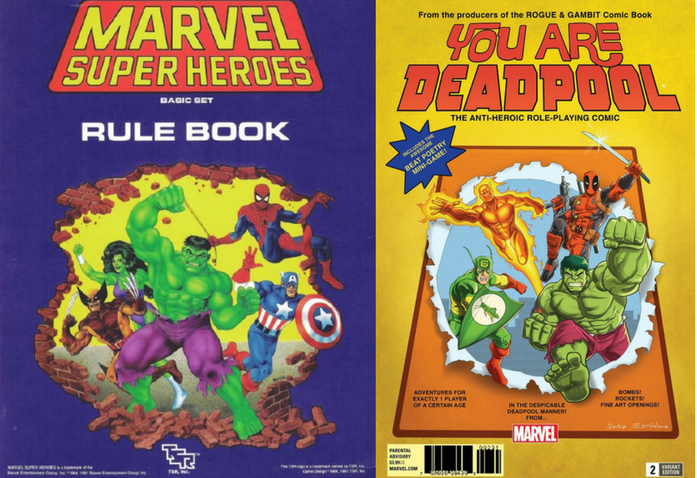 The Game: TSR’s Marvel Super Heroes RPG. A beloved superhero game from the mid-80’s that allowed fans to lace up Captain America’s boots for four-color battles with Marvel villains, or take a moment to create their own heroes to protect the citizens of New York City.

Why Deadpool Would Love It: Playing other Marvel characters fits Deadpool’s M.O. and his snarky asides wouldn’t be out of place at most gaming tables. He probably has dozens of funny voices to use for his fellow Marvel characters and might even just have a conversation with himself in the corner while everyone else played the game. Plus, the game is known to fans by the acronym the main attributes spell out—FASERIP. That alone would amuse Deadpool for several sessions. 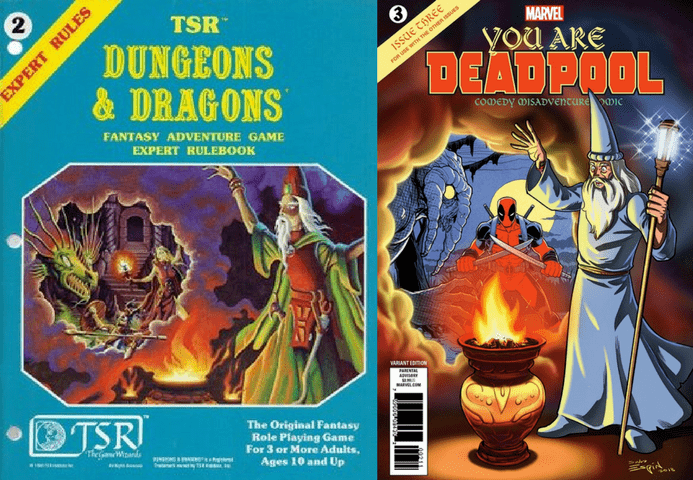 The Game: TSR’s Dungeons & Dragons. This cover references the 1st Edition Expert Set that acts as a companion piece to the Basic Set. The wizard is spying on the scene from the first cover.

Why Deadpool Would Love It: Nearly everyone started out playing D&D in their RPG experience. Deadpool is likely no different. He might have even played it back when he was plain old Wade Wilson. Old-school D&D is often run in an adversarial style featuring puzzles that challenge the player and not the character. Deadpool seems to be the type who would frustrate DMs trying to outsmart their players and cause the game to end in a growl of frustration. 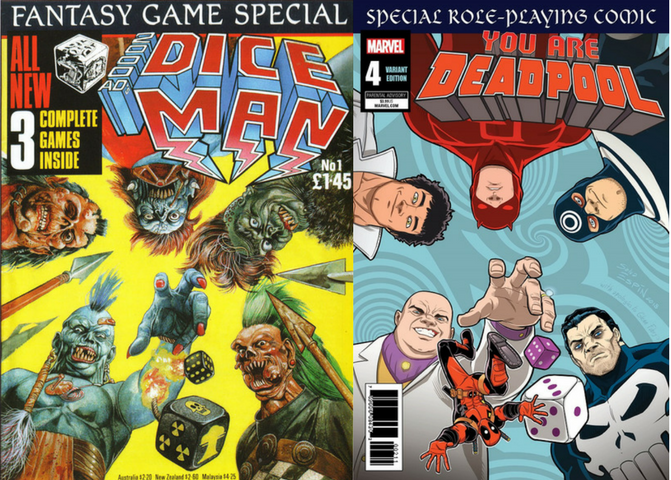 The Game: The Dice Man comic anthology. This is probably the deepest cut out of the covers, being a short series from 1986 released by Fleetway as a spin-off of 2000 AD. But it’s also the most directly relevant, as most of the feature stories in each book were gamebook style tales centered around Rick Fortune, a psychic detective using Atlantean dice to help the reader get through each story.

Why Deadpool Would Love It: These comics are in the same style as You Are Deadpool but their anthology styling also fit the wide variety of stories that Deadpool fits. One month could be a gritty shootout with mob thugs, the next could be a romp through the galaxy with a variety of spacefaring heroes. And Deadpool is likely to be one of the few people to successfully complete the impossible issue where the reader plays Ronald Reagan, President of the United States of America. 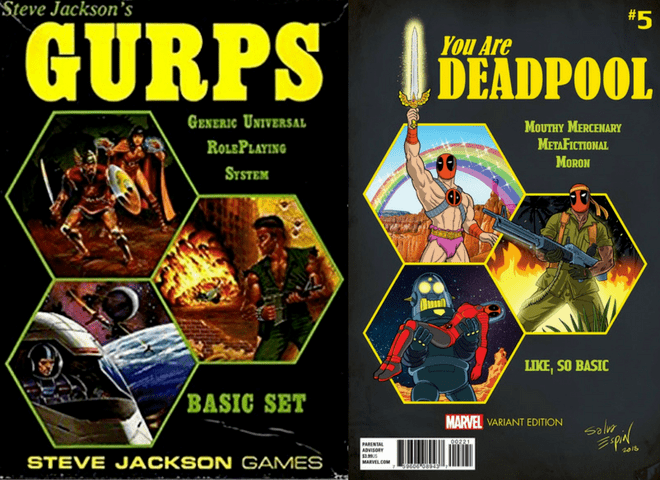 The Game: The Generic Universal Role-Playing System—better known as GURPS—was originally released by Steve Jackson Games as a way for gamers to only have to know one system to play multiple genres. It also is known for several great sourcebooks full of tips and tricks to help gamers get genres to feel just right.

Why Deadpool Would Love It: Deadpool’s genre flexibility fits here as well, but it also reflects the idea that this is a game where he could play himself. Deadpool the Barbarian one week, Captain Deadpool of the Starship Underpants the next. GURPS characters are also often built with a high amount of points that make them powerhouses that can stand up to anyone. Sound familiar?


Rob Wieland is an author, game designer and professional nerd. He’s worked on dozens of different tabletop games ranging from Star Wars and Firefly all the way down to his own creations like CAMELOT Trigger. He can be hired as a professional Dungeon Master for in-person or remote games. His Twitter is here. His meat body can be found in scenic Milwaukee, WI.