Stranger Things takes place entirely in the 1980s, and there were lots of things to love about the decade. The music was fantastic, everyone had a Trapper Keeper, and The Golden Girls was still on the air. Not everything was great about those years, though, including one of the most infamous disasters in American marketing history: New Coke.

In 1985, Coca-Cola revamped its popular drink with a different recipe, and it was a massive, historic failure. But distance makes the heart grow fonder, and in today’s modern world there’s no product so despised that it can’t be used in a clever, cross-brand viral marketing campaign, which is why Coke is bringing back its most hated item ever for a limited time ahead of Stranger Things 3.

Coca-Cola released a “commercial” featuring the kids of Hawkins, Indiana—where love and soda is in the air—which also doubles as a promo for the upcoming season set during 1985, the same year New Coke landed like an atomic bomb in stores.

Variety reports that it was Netflix that approached the soda maker about a partnership, and the sweeter New Coke will feature in some of the season’s episodes. We’re not sure what will last longer in Hawkins, the monsters from the Upside Down or New Coke, since it was pulled from shelves less than three months after it was released.

The “new” New Coke, of which around 500,000 cans will be available to purchase online as part of a package at CokeStore.com/1985 (check back this Thursday, May 23 for more information), is based on the same recipe used in 1985, but it will come with a slightly redder packaging. Coca-Cola will also release some specialty cans and bottles with a Stranger Things motif. 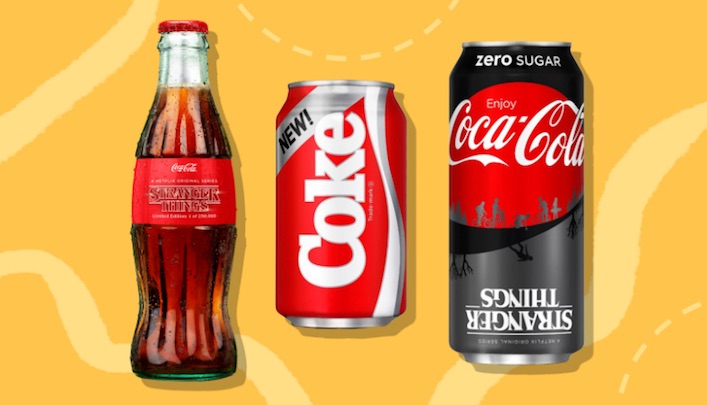 I’ve heard the story about New Coke for years, about how it was a terrifying, monstrous disaster that everyone hated, sort of like the Demogorgon.

And I can’t wait to try it. The ’80s were pretty great, even if New Coke wasn’t. How often do you get to literally drink in nostalgia?