The barbarian in the library with the sword? Oh, you sweet summer child, there’s a much bigger mystery at hand than simple murder in Clue: Dungeons & Dragons. A group of veteran adventurers discovers that the Infernal Puzzle Box has been stolen. Even worse, one of their own number has been replaced by the nefarious Zariel, who wants to claim the relic for her own. That means not only are you down one party member, you can’t trust any of your remaining allies. Who is the traitor, and will you find the puzzle box in time?

This looks to be a meticulously designed mashup between Dungeons & Dragons: Descent Into Avernus and the Clue game you know and love. Featuring iconic characters and creatures like Minsc and Lulu the Hollyphant as player tokens, up to six players can descend into the mystery. (We call dibs on the cat-like Tressym player token.) You’ll be rolling d6s instead of d20s, but that doesn’t make this any less of a Dungeons & Dragons adventure.

Instead of a mansion full of secret passages, you’ll be exploring the depths of Baldur’s Gate, from the Low Lantern Tavern and the docks, to places only the truly brave venture, like the Undercellar and Dungeon of the Dead. 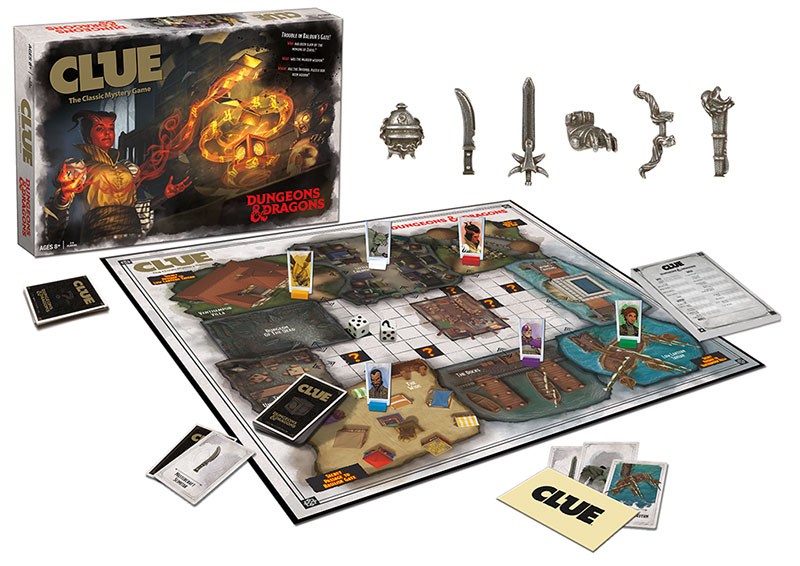 Use the Clue deduction skills you’ve honed since you were a kid to figure who the traitor in your midst is and where they might have hidden the Infernal Puzzle Box. Perhaps Zariel used a Horn of Blasting to defeat your comrade? Or a Great Sword? Find out before it’s too late!

Clue: Dungeons & Dragons is available now at major retailers and your friendly local game store at a retail price of $39.95.