CLUE: DUNGEONS AND DRAGONS Is a (Baldur's) Gate to Adventure - Nerdist

CLUE: DUNGEONS AND DRAGONS Is a (Baldur’s) Gate to Adventure

Get ready to use investigation checks and perception checks in real life when you play Clue: Dungeons and Dragons!

This is the second time the two companies have teamed up for an adventure, and in this Descent Into Avernus–themed board game, there’s a much bigger mystery at hand than simple murder. A group of veteran adventurers discovers that the Infernal Puzzle Box has been stolen. Even worse, a member of their crew has been replaced by the nefarious Zariel, who wants to claim the relic for her own. That means not only are you down one party member, you can’t trust any of your remaining allies. Who is the traitor, and will you find the puzzle box in time? The game’s afoot! 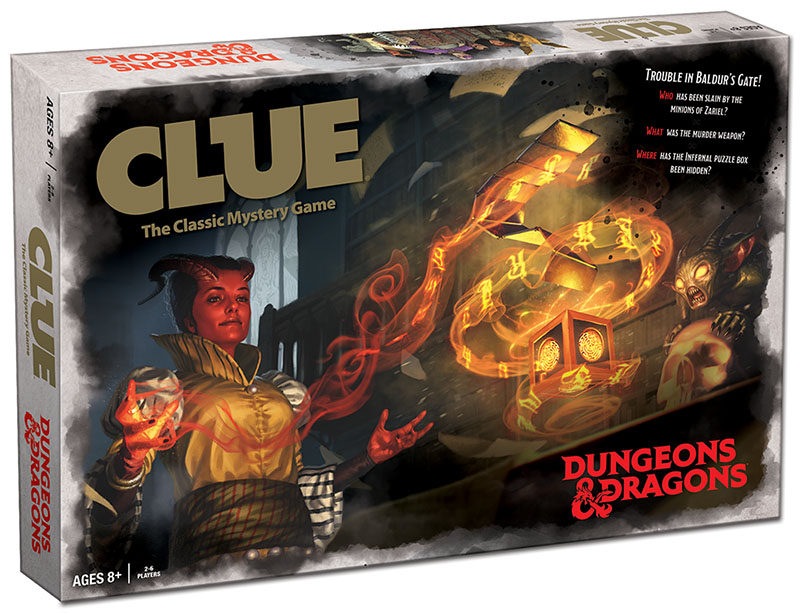 TheOp’s in-house artist Hannah Friedman created the art for this edition of Clue. As a longtime fan and player of the role-playing game, it was a natural (20) fit. “My first D&D campaign started in high school with some internet friends,” Hannah told Geek & Sundry, “and even though some members of our group have left or been added over the years, we still get together almost every week, 8 years later.”

The classic Clue game board combines seamlessly with D&D 5e with locations from Baldur’s Gate that will be familiar to anyone who has spent time in the city. It was important to Hannah to make it feel like players are in the classic Forgotten Realms city, she told us.

“I took into consideration where on the board each room was,” she explained, “and adjusted the perspective of the composition to match, so the perspective lines all point towards the center of the board. I wanted the players to feel like they’re looking down into these settings, rather than seeing postcards of them.”

If there’s someone on your holiday shopping list whom you’ve been hoping to get into Dungeons & Dragons, this edition of Clue might be the gateway you’ve been looking for. “For people who haven’t had any prior tabletop RPG experience, seeing the huge rulebooks and detailed character sheets can be intimidating,” Hannah says. “I think taking the world-building from D&D and transposing it onto a game system that’s simpler and more accessible is a great way to get novice players invested in the D&D universe.”

Clue: Dungeons & Dragons is available now at major retailers and your friendly local game store at a retail price of $39.95.