Claw Your Way to the Top of the Food Chain in Evolution: Climate - Nerdist

Claw Your Way to the Top of the Food Chain in Evolution: Climate

Evolution has gone through quite a few iterations, each one an improvement on the last. The base game is a reimplementation of Evolution: Origin of the Species; which streamlined a number of systems and made some overall balance improvements. From there it took to the air in Evolution: Flight which added feathers and some new feeding options. Climate is the latest, well, evolution of this game of back and forth card play and is my favorite version so far.

Available as both a standalone product or as a traditional expansion for owners of the base game, Climate adds a layer of long-term strategy to a game normally dominated by fast-paced tactics. The entire ecosystem is now changing in response to global temperature swings, and must also respond to potentially cataclysmic events. Everything from heat waves to extinction-level volcanic eruptions are now present and must be accounted for.

The narrative setting of this game is one of building and changing your growing species but the actual play of the game is about rapid responses to your opponents. Food is scarce and unpredictable so creatures that can snack more efficiently will likely win the day. The climate track helps with planning – food is more readily available in the tropical zone – but it can change every round so there is still uncertainty. Carnivores appear and disappear throughout the game, hunting your species down and potentially causing them to go extinct. A game of Evolution is tense. It’s a game of managing scarce resources and reacting to the ever-changing framework of nature. 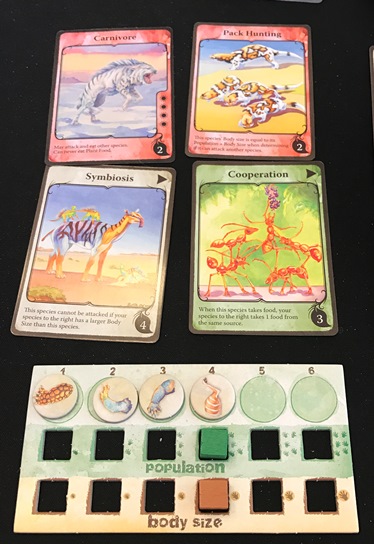 Gameplay is extremely simple, though not at all lacking in depth. Your hand of cards represents everything. The DNA of this game is in the multi-use cards, which is something I love in games. They’re used to determine the global food supply, manipulate the climate track, grow your species, and even change your species dominant features. Using them for any one of those things means losing it for the others which adds a great decision point. Do you use your Horns to protect from your opponent’s Carnivore? Or do you use it to make the world colder so his Carnivore dies in the snow?

Careful management of your traits is critical. Every card can give you an advantage in some way or another but they must be used to predict and react to the changing world of your game. A species can only have so many traits; if your long-necked burrowing fur creature is getting eaten every round then swapping out the fur for a hard shell may be the right move. If your opponent predicts that and devolves their carnivore back into an herbivore then you’ve just wasted a play. This back and forth reaction mimics the Red Queen hypothesis –as noted by Science— and offers an excellent opportunity to pressure your opponents.

As far as actually playing the game goes, that rapidly changing back and forth is great. It’s incredibly dynamic. Unfortunately, I don’t often feel attachment to my species and it breaks the immersion to rapidly bounce back and forth from carnivore to herbivore or rapidly swapping between the same two traits. While the image of giraffe-esque creature whose neck retracted and expanded like an accordion over time is a funny one, it doesn’t quite give me the feel of evolution. Every now and then a single species will survive the whole game but mostly I look at my species as points engines, not as unique creatures. The rules do include a fun chart with Latin words you can use to name your creatures if you grow more attached to them than my black heart allows.

Be careful getting too attached, however. The Climate expansion really heats up the strategy and makes things far more dangerous for your critters. Not only does the climate track influence the available food, but the planetary weather conditions can turn hostile for your favorite species. As it gets colder, smaller animals will suffer and die off if they can’t bulk up. On the other end of the track, large bulky animals will perish in the scorching heat. Large-bodied animals are a natural defensive mechanism against Carnivores so a smart player can punish a big-animal strategy by making the world hotter at the same time that they trade in their canines for mud-wallowing behaviors allowing them to stay cool.

The climate track is a really smart addition to the game and offers a place to push your opponent. Evolution can snowball a bit, as strong players build a tableau of creatures that complement each other and surge ahead in points. Manipulating the climate gives you another avenue to push back and keep your opponent from riding an avalanche to victory. Few things feel better than wrecking your opponent’s plans with a well-timed volcanic eruption that plunges the world into an Ice Age that your species are conveniently well prepared for. 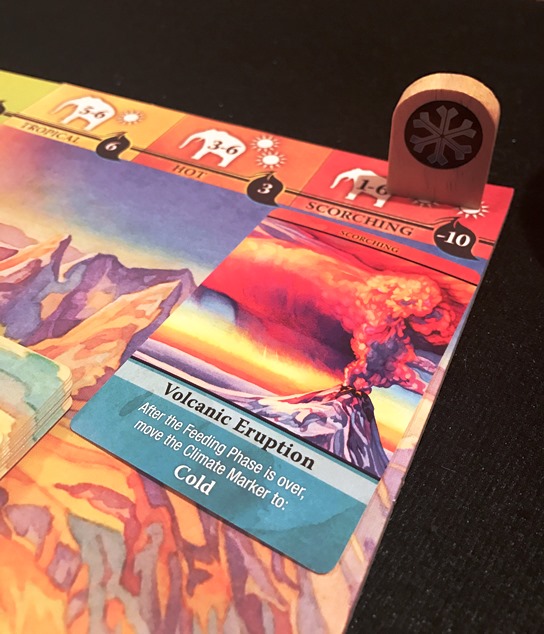 Like the biological mechanisms that brought us out of the primordial ooze, Evolution is a game of constant reinforcement. Well adapted species will reward you with points and growth, while the creatures that don’t cut it will either change or die off. That reinforcement provides a steady drip of dopamine that makes playing the game fun even while losing, a rare thing I’m happy to see. The gaming landscape is one full of excellent options, but Evolution: Climate keeps clawing-and flying, burrowing, and climbing it’s way to my table.

What do you think about a game that can reinforce educational concepts while still being fun? Have you played Evolution? Let us know!