Annabelle, played by Erika Ishii, represents Clan Brujah in L.A. By Night. As a character, Annabelle is young and naïve; she knows nothing of her clan’s sordid history or even the secrets that shape her world. Many players never see clan Brujah beyond the veil of angry biker gangs or roving packs of mindless anarchists. Even in their initial write-ups of V5, they are portrayed as passionate but unable to build a legacy due to their rage. Clan Brujah puts forth this image and allows their young vampires to beat their heads in futility against the system. As they age and have experience under their belt, they are one of the most powerful clans of vampires that exist; as their hidden lore reveals. 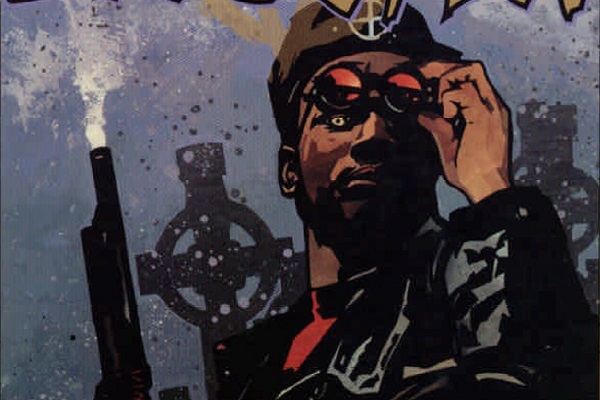 Clan Brujah has always been one of the three major pillars of the Camarilla until the latest edition of Vampire: The Masquerade. Brujah cover figure and clan champion Theo Bell killed the Camarilla founders in the name of freedom and equality proving the name Anarchist doesn’t mean pants-on-head crazy to them.  The clan divides themselves up into historically three factions: Individualist, Idealist, and Iconoclast. Brujah Individualists pride themselves on forming an ironclad willpower against all forms of supernatural manipulation and fighting for the rights of personal expression. Idealists find themselves driven to control their Beast and build new glorious empires. Lastly, Iconoclasts seek to evolve change in the system by tearing down the old. Viewed in isolation, the Brujah may look like sad hopeless idealists, but if when the larger clan is taken into account—they are a veritable army of change.

If you wanted to play a hero or a warrior-scholar they even had their own custom path of morality called Path of Entelechy in prior editions. If pretending to be a human isn’t enough, the path professed that people with supernatural powers should strive to achieve greatness for themselves and those around them. By purging the beast within them and defending mortals from the monsters of the night the philosopher adherents of this path sought true mastery of themselves. In their ranks, they mastered some iconic Brujah powers of Iron Will against mind control, the fury of a warrior to inflict terrible wounds, and even use the beast itself as a weapon. If you ever wanted your character to become a pavement pounding superhero or a warrior-scholar, this was the clan for you.

They May Have Killed An Entire Clan…And Ate Them

Even as an army of change, no clan in Vampire: The Masquerade is without a little blood on their hands. Heck, with the rise of the Second Inquisition in V5, Clan Brujah arguably leads the war against the Camarilla even now. To the eye-roll of every White Wolf storyteller that I’ve ever seen, there was once another line of Brujah called The True Brujah (they aren’t the most creative bunch for self-naming intentionally). This clan of True Brujah were the first Brujah and had the ability to manipulate time itself and depending on the edition of vampire you were playing—was either insanely broken or surprisingly well balanced.

The Brujah Antediluvian (Clan Founder) was diablarized by Troile the Rebel in that prehistory before real civilization. Survivors and descendants of the original Brujah Antediluvian hold their heads high as the True Clan and call Brujah like Annabelle nothing more than impostors. Side-by-side you could hardly tell them related. True Brujah retain their discipline of Temporis, can manipulate time, and are as emotionless as a plank of wood. Meanwhile, the Brujah of the V5 are passionate, speedy, and filled with a righteous cause behind their gaze. It will be a curious thing to see the revival of the True Brujah in the latest edition and the impact they will have on the war between the Camarilla and Anarchs.

While it’s highly unlikely that Annabelle or her sire are true Descendants of Tyler, V5 provides an interesting historic tie for Brujah Characters. Patricia of Bollingbroke, a.k.a. Tyler was the creator of the Anarch movement.  Tyler represents all three angles of the Brujah clan (Iconoclast, Idealist, and Individualist) since her debut in early Vampire lore. It was she and her coteries that launched the first attacks on tyrant elder vampires in the Dark Ages and paved the way for both the Anarchs and the Sabbat movements.

What happened was the Inquisition. When mortals and church hunters started to locate and hunt down vampires in the Dark Ages, the elders threw their children in the way and fled for their own safety. After all, it was much easier to save yourself when the torch-wielding mob was burning someone else’s house. Tired of it all, Tyler led the revolt through violence, idealism, and a visionary nature about the future of vampire society—and it worked. Unlike other iconic vampire characters, Tyler still exists in the world, and if you’re her descendant you can develop tricks like controlling your Beast (I see you Path of Entelechy) and earning support of elite Brujah warriors to fight by your side when deposing of a Camarilla or Anarch Baron that may fancy themselves an unkillable blood-god.

Rick Heinz is a self-professed Brujah, the author of The Seventh Age: Dawn, and a storyteller with a focus on LARPs, Wraith: The Oblivion, Eclipse Phase, and many more. You can follow game or urban fantasy related thingies on Twitter or Facebook.