Choose Your Own Adventure with WANDER: THE CULT OF BARNACLE BAY - Nerdist

Choose Your Own Adventure with WANDER: THE CULT OF BARNACLE BAY

What do you get if you cross Lovecraftian horror with anthropomorphic heroes and Avatar: the Last Airbender? You get a fun, family-friendly, choose your own adventure game called Wander: the Cult of Barnacle Bay by Panda Cult Games. I got a chance to demo the game at Gen Con and talk to the guys and gals at Panda Cult about it.

First things first, this is a completely cooperative game that scales for the number of players and level of the characters. When they say completely cooperative, they mean it. There is no one rolling for the enemies, their movements and attacks are based on the nearest hero. You roll to evade the attacks, so no more accidentally killing your teammates with a lucky roll. The game is really easy to learn and, while dark in places, perfect for the whole family to play. Also, look at how cool these minis are: 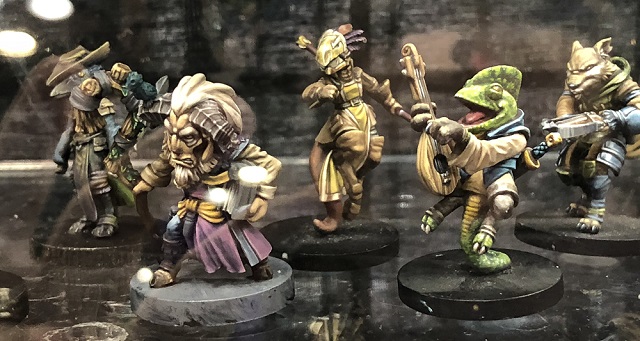 On each player’s turn, they get two actions they can do: move two spaces (unless the terrain hinders that movement), fight, swap gear with another character, or interacting with objectives. They can also use all of their actions to move up or down the initiative tracker. Because this is cooperative, other players can give advice that the player may or may not choose to ignore (like not exploring the darkness until we’ve killed some of the enemies that can see us). 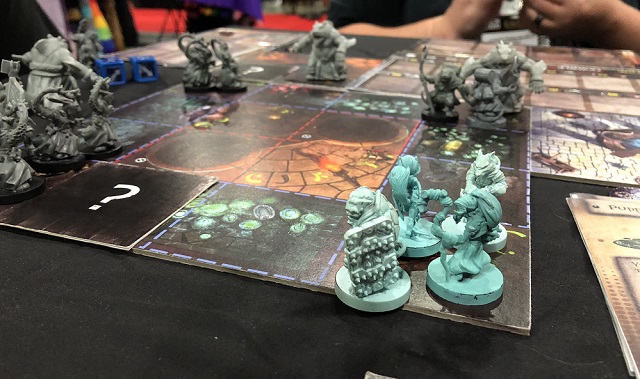 Melee attacks are from adjacent squares. If you’re ranged, you can shoot as far as you can see in a straight line. Attacking and defending are resolved through dice rolls, with the different symbols affecting the outcome. If you are melee, you don’t want to get a bunch of arrows because those are only for ranged attacks. Shields are defense and crits allow for another die to be rolled and added to the result.

Where you are on the initiative tracker is important for a couple of reasons. The higher you are, the more likely you are to get hit. If you have a lot of health, you probably want to be higher in initiative order than your more squishy compatriots. If you play with the slightly advanced rules, there are symbols next to every slot of initiative that gives that character or enemy a bonus (harder to damage, etc), so it pays to keep track of who benefits from killing that last Tentacle Bunny Zealot. 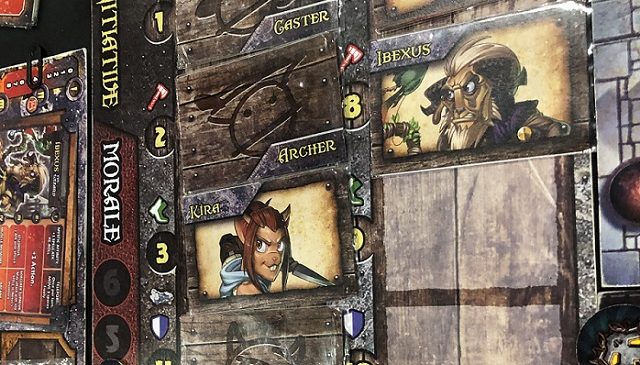 With all the Bearsharks and Otter Grab Grunts running around, you’re bound to get hurt. When you die (and you will if you don’t listen to the group about not exploring the darkness, Jonathan), you get bumped the end bottom of the initiative. You’re not out completely because you roll on your turn to see if you get up. On a crit, you stand back up with half your health. Other players can roll to help you up as well.

As you progress through the game, you’ll gain experience that ticks up your character card. After so many kills, you progress to the next level. At level two, you gain another action on your turn, but the first person to a new level triggers more monsters into the fight. So be careful when killing or the board may get swarmed when you hit level three while everyone else is level one. Spread out those kills, folks, for the good of the whole group. 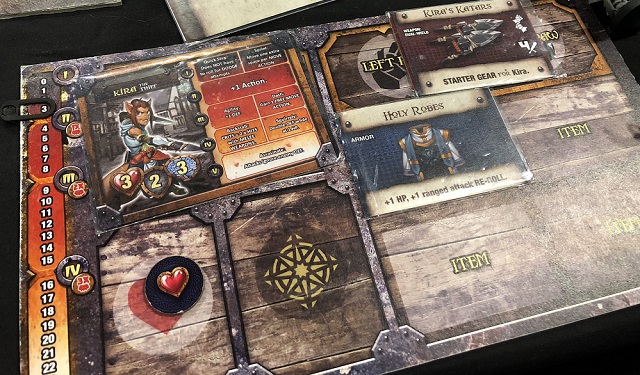 Event cards keep the game from getting too hack and slash. They create what the guys like to call “water cooler moments.” These are the cool stories you tell long after the game has ended. Like that time Jonathan explored the darkness after telling me that it was a bad idea to do until we killed the things that could see us. We ended up with half the party knocked down and the other ones frantically trying to clean up the mess.

You can’t have a campaign game without loot. That’s where chests come into play. Anyone can use any of the items you pick up, but some are much better for certain characters. If you don’t like what you have on, swap it with another character on your turn.

When you’re done with a scenario, it’s up to you where you go next. Unlike other campaign style games, you get to pick what direction your characters go in. Will you explore the sewers or find some other great adventure? The choice is up to you.

One last cool tidbit that I thought was super cool: the designers put themselves into the game as well as some of their friends. Jonathan is Jon the chameleon bard, Heath is Roland the red panda warrior, and Elizabeth is Liz the mouse runecaster. There are more characters coming for members of the team that joined after the Kickstarter, so keep an eye out for them.

Wander: the Cult of Barnacle Bay will be shipping out their backers by the end of the year and will be available to the general public after that.

Tell us in the comments what you think it’s scarier: a Bearshark or a Tentacle Bunny Zealot!