It’s tough to make waves on the internet. So many funny memes, sexy folks, and general mischief to be had. So sometimes a brand will create something so crazed, so devastating, so smoldering, so strange that you”ll hardly know what to do with yourself. That was very much the case with Netflix’s holiday-themed advertisement/short film/specific kink soft core that sees Gavin Leatherwood, a.k.a. Chilling Adventures of Sabrina’s Nick Scratch, sexily basting a turkey.Yes. Sexily. Basting. A. Turkey.

We’re personally very distressed by this video he even says the word moist and some of the highlights include Gavin dripping hot fat into his mouth, sexily wielding a giant pepper grinder, stroking a raw chicken, and sultrily mashing some potatoes. Honestly it’s baffling in its strangeness and definitely has nothing to do with the show (unlike last May’s perfect video of Jughead finally eating a burger) but it certainly serves a very specific kink. If you’re really into clean-shaven teens with muscles making you Thanksgiving dinner than you are in for a treat! 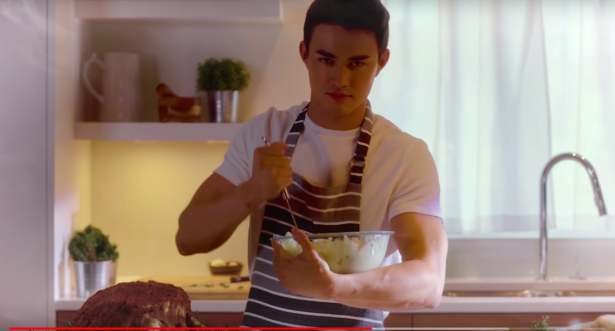 We’re also slightly worried about Gavin’s nutritional habits as the video starts by asking if we’re thirsty but then focuses solely on food, so even if we were thirsty we definitely would not be sated by his offerings. But if you’ve ever wanted to see Nick Scratch from Sabrina eating a giant turkey leg like a tired dad at Disneyland, this is your chance!What do you think of this Holiday feast? Are you now a Gavin Leatherwood fan? Are you just confused by the whole thing? Let us know below!