I have a confession to make. I am a gaming hipster who tends to gravitate towards miniatures games that most people have never heard of *pushes hipster glasses up*. Most of the time, this involves spending a bit of money on a game that doesn’t really do anything for me and the models are relegated to the ever-growing closet of shame. Other times, I find gems. Relic Knights is one of the gems. 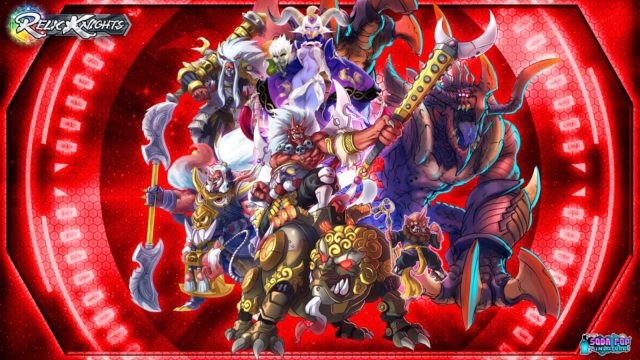 The game consists of 7 playable factions, each with a unique look. The best part? Each faction is designed around an entire genre of anime. Space pirates? Check. Faceless corporation? Check. Heck, even if your thing is medieval knights in a universe with literal ray guns, there’s a faction for that. It is this diversity of aesthetics that really makes this game appeal. Everything has that anime look, but each faction represents a unique aspect of it.

Relic Knights has two incredibly unique gameplay mechanics that really separate it from other miniatures games, and make it both fun and incredibly satisfying to play. The first and most noticeable is the lack of any dice. Instead, this is replaced by an Esper deck. Esper decks are special decks of cards, designed for Relic Knights and function similar to land cards in Magic; abilities for your faction require specific colours and amounts of Esper and you cannot use them if you do not have enough in your hand. As each deck has a finite amount of Esper for each colour, it’s important to keep track of it. Really needing a major blue Esper and not realizing that your deck doesn’t have one waiting for you can be catastrophic to your plans.

In Relic Knights, similar to anime stories themselves, heroes are mighty combatants who can single-handedly win a battle. This is represented in the game through an activation queue. In Relic Knights, you declare what heroes are going to activate, and in what order. The really cool effect this has on gameplay is that you always know what your opponent will activate next and some factions even have abilities that can mess with their opponent’s queue. How cool is that? This short gameplay video shows off these mechanics in action.

Now’s the perfect time to get started in Relic Knights: they just happen to have a Kickstarter going right now for both their 2nd Edition, as well as a brand new 2-Player Starter set. This starter set contains all the models (and more), and the scenery found in the above video. It also contains some really cool information about the future of Relic Knights, and that future has me really, really excited. This 2nd Edition release is coinciding with the expansion book “Void Break” and they’ve announced that they’re already working on an expansion book for release afterwards. They’ve also mentioned plans of starting Relic Knights Organized Play events and expanding their presence at events. I can’t wait.

What genre of anime would you like to see turned into paintable miniatures? Let us know in the comments!