Celebrate 50 Years of Star Trek With This Amazing Board Game

“Space: the final frontier. These are the voyages of the starship Enterprise…”

If hearing the first sentence of that iconic quote gets your loins all tingly, then this is the game for you. If instead you’re running for the closest X-Wing or Viper, or whatever preferred mode of transportation system you’d flee in, pump the brakes because this game is likely for you as well. Star Trek: Ascendancy is not just a great Trek board game; it’s simply one of the best 4X designs ever birthed.

Players will spread across the boundless realm of space controlling the Federation, Klingon, or Romulan empires. You start from a humble beginning with a few ships and a single colony. The goal is to achieve Ascendancy by amassing culture, or smash the worlds of your opponents and guzzle their blood to gain Supremacy. Both are valid, achievable, and oh so satisfying. 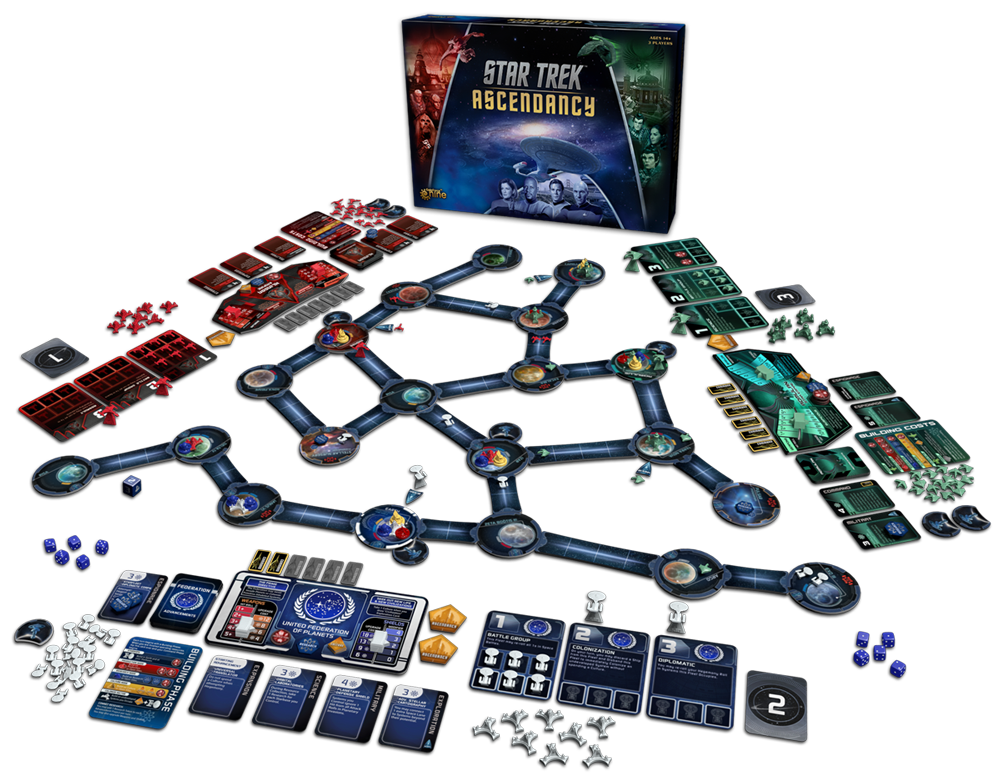 You’ll start by exploring. Ships will be sent to warp and emerge into new prospering locales. Or you’ll hit an ion storm and have your fleet crushed. Maybe you’ll survive and study the phenomenon to gain precious Science that will be funneled back into research.

This exploration mechanism is the most unique element of the design. Discovered planets have a loose position on the map as they can be swiveled and pivoted around the celestial body you explored from. Any player can move a planet on their turn so it allows for a dynamic and vibrant galaxy that will take interesting shape from player advocacy. It’s thrilling and feels alive in a way most other games would kill for.

Additionally, each planet is given context via random encounter card. Sometimes you’ll run into killer robots wanting to repel you from their home. Other times you’ll run into massive culturally rich and economically powerful civilizations. The gamut is wide and there’s a definite sense of mystery and subsequent excitement when you draw that card and see what treasures–or horrors–await.

These encounters are the primary way in which the television series pops its head into the game. While each of the three civilizations is wonderfully asymmetric, most of this game is from a zoomed out epic scope. Additionally, the game takes place over decades so you never get a sense of Picard or the Enterprise specifically, except for these wonderful encounters that will have you perking up and reminiscing about moments of TNG or Voyager.

This also means that if you’re not a huge Trek fan, it doesn’t really matter. As long as you know that Klingons mean death, Romulans are cloaky mofos, and Federation wants to gives out blankets and food; you’re golden. Each civilization has a special rule such as the Fed gaining Culture for discovering developed planets and phenomena. They also have a flaw which means the Enterprise can’t bombard a planet and wipe it out. Diplomacy is the name of their game. 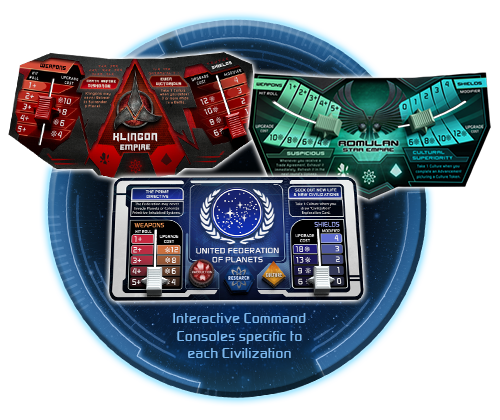 Much of that faction flavor is found in the Advancement deck. Instead of an unwieldy tech tree, you have this slick collection of 15 cards that you draw from during play. You will have active projects that you are building toward which will diversify your faction and offer benefits. This is vastly preferred to a rigid tech structure because no two games will play out the same. Sometimes the Romulans will get cloaking very early, others they will develop mines or technologies that improve their warp movement.

Oh yes, let’s talk about warp. Ships can enter warp by spending one of your limited actions. They are considered off the board and will build up additional warp tokens over time. When they eventually come out, you can fly across the map uninhibited. For each token accumulated you can jump one planet as long as you’re not moving through an enemy ship. This can be devastating if you have several connections to a neighboring empire as you can reach their home-world quickly if they’re not prepared. It’s clever and gives way to a strong sense of dynamic play that feels extraordinarily thematic.

Warping single ships all about the galaxy can quickly get action costly. The solution is to form fleets. Each civilization has three fleet cards that allow you to group spacecraft into a single cluster. This saves you actions as you pay to move the fleet, not each individual ship. However, the main draw is the inclusion of a special ability.

Each fleet card is double-sided which means six total options. You can build battle groups, science fleets, raiding parties, and many more. These fleet abilities are faction specific in many cases and add another touch of flavor with minimal rules overhead.

There are so many satisfying clever twists that I could spin yarn endlessly on this beauty. It is necessary to point out that Ascendancy’s Match.com profile isn’t all roses and butterflies. The space elephant in the room is the fact that this game only supports three players out of the gate. Not two, not four, just three.

You can jump to four players with the oncoming Cardassian or Ferengi expansions, but that’s not entirely desirable given the playtime of an hour per player. Three hours is a tough sell, but it’s do-able on a regular game night. Heading to four plus is very difficult for most.

Additionally, downtime can be rough as players acclimate to their options. The lack of threading together turns and instead dumping the entirety of a player’s actions on them in one big chunk is slightly disappointing. It works in the context of the game but it can certainly make for extended bouts of waiting. Luckily for Ascendancy, the wait is worth it.

This is a hell of a game. Hours will fly by and your podunk little-planet-that-could will explode into a swarming juggernaut of an empire. You will make deals, colonize planets, and lay waste. We play games to have fun and Ascendancy will mainline the fun into your bloodstream and have you swooning from the get-go.

Are you a Star Trek fan? Do you plan on trying Ascendancy? Let us know in the comments below!

Science & Tech
What To Know About the Multiverse, Both Real and Fictional
Melissa Truth Miller
4 MIN READ
SEE MORE