Cash, Corruption, and Cannoli - The Brutal World of The Godfather: Corleone’s Empire - Nerdist

Cash, Corruption, and Cannoli – The Brutal World of The Godfather: Corleone’s Empire

Before you lies all of New York City just waiting for the taking. You’ll see the city already sliced up by boroughs with a couple of shops open for dirty business. This is the playground where you will grab goods to turn in to the Don for jobs, shake down whole areas for more resources, or simply muscle in to gain control of an area. The Godfather: Corleone’s Empire by CMON Gamestakes place over four acts and each act is split up into five stages. Don’t get hung up on the numbers, however, as the bulk of your time will be spent tossing your family members on the board and watching your well-laid plans float belly up on the river.

At the beginning of the game, everyone gets a handful of money, a couple of odd jobs from the Don, and a family member along with a couple of thugs. You can tell who is who by the round bases for family members and the square bases. As the acts carry on, you’ll pick up a few more members of the family. You also get a suitcase, something to keep things safe when the Don starts asking for donations. This is where you’ll keep you pocketed money and any jobs you manage pull off. Anything lingering outside of this case when the final curtain drops is as dead Luca Brasi.

On your turn, you do one thing before passing the turn to the next player. (Spoiler: You’ll want to do all the things all at once, but this game doesn’t work like that.) You can place either a thug or a family member on the board. Thugs shake down the front of businesses to give you the resources you find at the bottom of the shop. Family members take on whole sections of the city and often multiple places at once to give you everything you find at the back of the store.

There’s a simple genius to tying two mechanics together effortlessly. What you want is not always where you want to go, and where you go may not always have what you want. Pieces act as both resource gathers and territory fighters at the same time. No placement feels like a wasted effort when you get so much out of sending your family out on the town. Once a thug knocks over a business, he’s in there for go – unless you find other means of persuasion.

Speaking of other means, you can also fulfil one job on your turn either from your hand or from the open jobs beside the board. The Don can’t be bothered to get his hands dirty dealing with firearms, alcohol, drugs, and dirty money, but look at you with those clean appendages. Why don’t you start using the items you get from shaking down businesses like a broken Etch-e-Sketch?

Players will need to match the resources pictured on the card or substitute any one resource for narcotics. (They come later in the game if the right shops open.) Completing a job give you the money at the bottom of the card to add to your hand and lets you do what’s written on the card. More resources often mean stronger effects from moving people on the board, taking care of money problems, or giving them a personal tour of the Hudson River (read: elimination). Once completed, jobs go into your briefcase to remind the Don you’ve been a good little mobster and earn some end game points.

Jobs feed into another mechanic – hand management. You could own all the illegal goods in the world, but without the right jobs, they’re dead in your hands and vice-versa. With the right cards, you can completely obliterate another player’s strategy. Getting the right resources often means jumping into enemy territory or having to give up some dollars when the Don comes calling at the end of the turn. Powerful and costly, a well-placed job can mean all the difference between gaining ground or losing your shirt.

You also have allies you can play on your turn, but they also don’t come cheap. As in, if you want to get the mayor or police on your side, you show them a little dough them during the bribery phase. After you’ve toured the city a little bit in the first act, you’ll get a chance to make a secret bid for an ally card that goes in your hand. Each act comes with their own set of people to bid on, but there will be one less than players at the table. Pull money from your briefcase in secret before the big reveal. Top dollar gets the first choice while last place gets to keep their currency. Bidding nothing gets you nothing even if other people didn’t bid anything.

And here’s the rub: You continue to go around the table taking one action until there are no more family members or thugs in front of you. Even if you can fulfil a job or use one of your allies from you hand, you cannot do anything if there’s no one in front of you. In the same respect, you must also always take an action until you can no long take one. In the busy street of NYC, there’s no taking a break or simply passing a turn. You’ll often find players clinging on to their last family member until the bitter end.

With everyone out on the town, it’s time to count to see who controls what in the turf war. A simple majority will let you take the streets with a control marker, but a tie leaves a section without a new boss. Control is important for many reasons. First, players sending thugs to business in areas that you control means that you get to take the same action that they do. Second, getting the most markers on an area at the end of the game means getting a reward for holding the line. Ties are broken by who has the territory last so you can expect that Act IV is going to be a real bloodbath. 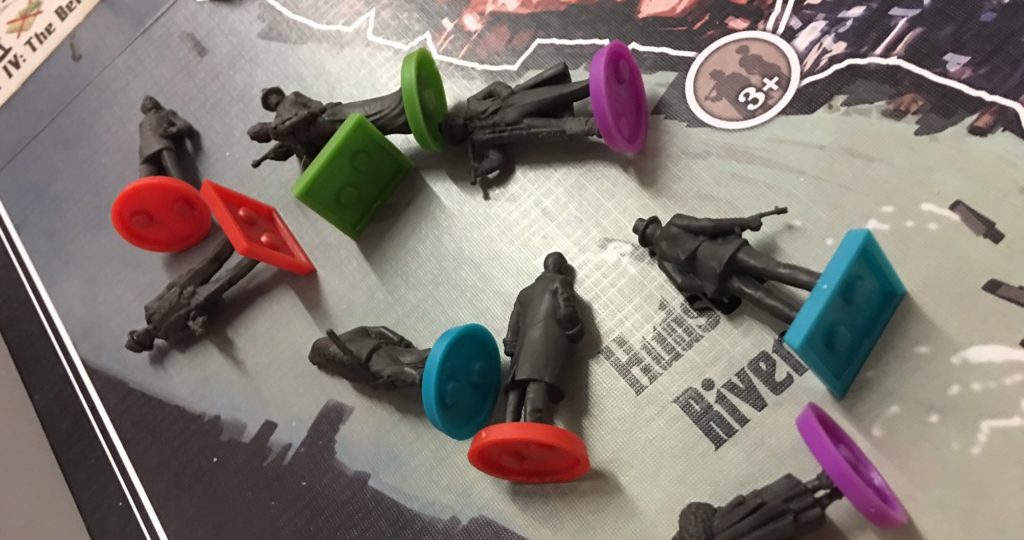 The brutality of the game comes with a caveat: we all do it. Today’s victim becomes tomorrow’s triggerman as players often get eliminated not out of spite, but by the need for resources. Players find themselves on the wrong end of the pistol when you camp out at the only location selling a particular good. It’s laughable when someone clears a whole section out with a well-timed car bomb. Bad things happen not because of some vendetta, but because players just need one more turn to get what we need in this round.

From the metal suitcase you store your money, the unique miniatures for each of the families, to the horse head starter token; The Godfather knows how to play with style. Simply setting up the components will bring more than a few onlookers to the table. The game plays fast even with a full set of five players. The sanitation department will be dredging up bodies from the river for weeks, but we managed to see the final Act in just over an hour and change.

By the end, we no longer needed to use the Brooklyn Bridge since we could step on the dead bodies to cross the river. Don’t expect a quiet night between you and your strategy in this game. The Godfather: Corleone’s Empire manages to pack enough explosives in this game to light up Time Square. If you’re someone who wants to conquer the world or just cause a little chaos, you can’t go wrong paying a visit to The Godfather: Corleone’s Empire.

All other images: Rob Manuel