CAPTAIN AMERICA: THE FIRST AVENGER and Its Classic Film Inspirations

Believe it or not, Captain America: The First Avenger came out ten years ago in 2011. The film‘s 1940s era setting means it drew aesthetic and historical accuracy inspiration from more than just comic lore. Director Joe Johnson has shared that Raiders of the Lost Ark was one of the major visual influences on the film, but you can also trace its roots back to classic Hollywood films. In honor of this milestone anniversary, here’s a look at some classic films that could have inspired it. 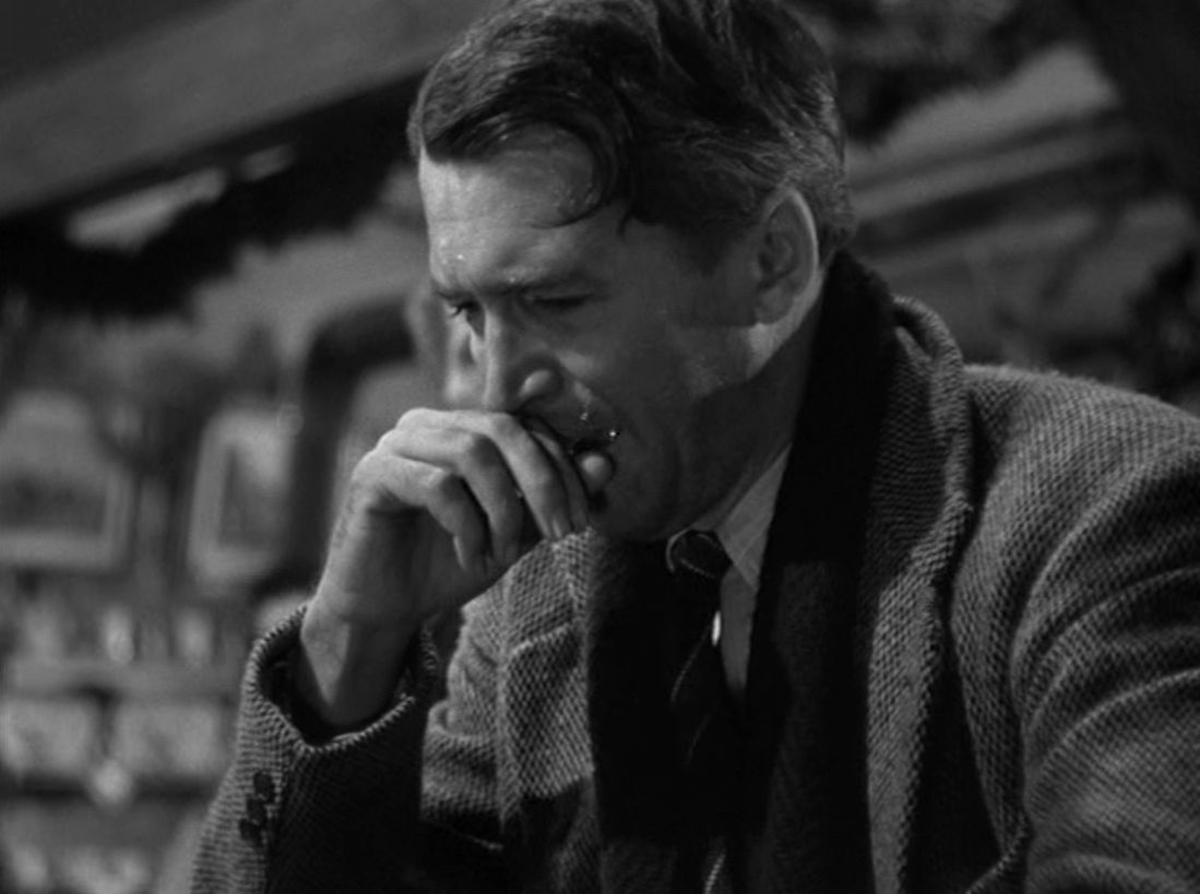 Due to his health issues, Steve Rogers (Chris Evans) is rejected from enlisting in the military and his papers are stamped 4-F. This is the same status bestowed on Jimmy Stewart’s George Bailey, one of film history’s greatest heroes of all time. Bailey had a bad ear, a condition resulting from saving his brother Harry during a near-drowning accident in his youth. Like Rogers, Bailey has a good heart and puts others above his own safety.

Before he ships off overseas, Bucky takes Steve to the future tech exposition, running off with some girls to go dancing. Stage Door Canteen and Hollywood Canteen are both films based on East Coast/West Coast wartime recreational centers where soldiers could dance with real-life Hollywood celebrities. Cameos in the films include Hollywood Canteen founders Bette Davis and John Garfield, plus Joan Crawford, Gypsy Rose Lee, and Joan Leslie. 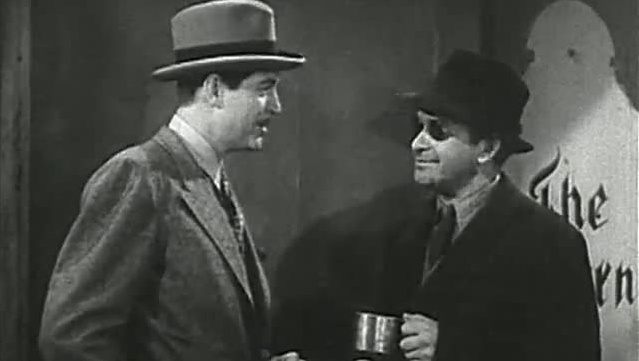 Much of The First Avenger follows antagonists Johann Schmidt/Red Skull (Hugo Weaving) and Dr. Arnim Zola (Toby Jones) as they attempt to extract the power from the Tesseract for Hydra. Similarly, this spy drama shows Nazi Capt. Gemmler (Hans Heinrich von Twardowski), who aims to find a chemical formula to improve the energy output of gasoline. Lest you thought Howard Stark was the original playboy scientist, Gemmler plans to use suave scientist Tom Fielding (William Bakewell) to achieve this goal.

Recruited by Dr. Abraham Erskine (Stanley Tucci) for the secret super soldier experiment, Steve finds himself in squabbles with fellow candidates during basic training. In this drama about the Women’s Army Corps, Lana Turner stars as an heiress who cannot access her trust fund until she can demonstrate some responsibility. After petty conflicts with her fellow trainees, all the women find strength and honor in their training, and resolution to do their part for the war effort.

They Were Expendable (1945)
Director: John Ford

Badass British Agent Peggy Carter’s introduction includes punching a man in the face for blatant disrespect. She can basically do what all the men do, just backward and in heels. In John Ford’s film, Donna Reed plays 2nd Lieutenant Sandy Davyss. She’s a no-nonsense nurse in the United States Army Nurse Corps who falls for Lt. J.G. “Rusty” Ryan (John Wayne). Separated by their respective orders, their final phone conversation is cut-off mid-goodbye. The film ends without either knowing if they will see each other again.

When Steve is successfully transformed into Captain America, a Nazi spy attempts to steal the formula and blows up Stark’s lab. After Steve chases him through the streets of New York a newspaper reads “Nazis In New York.” These two films tackle the theme of both “good” German scientists working with the Allies, like Erskine, and the hunt for Nazi spies eager to steal state secrets. 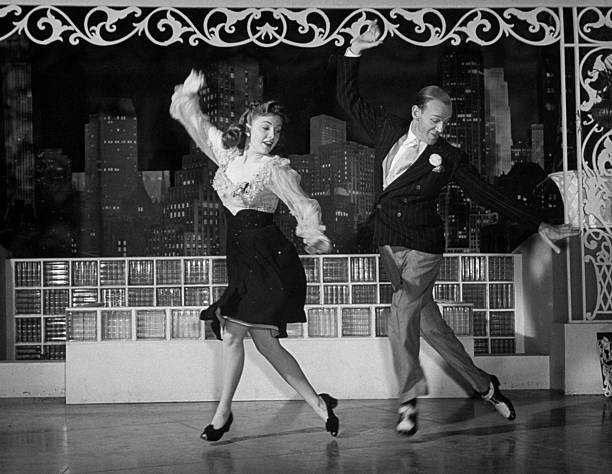 After Erskine is killed and the super soldier formula appears to be lost, Steve dons his Captain America costume for a war bonds tour. These wartime musicals follow several soldiers who are home from war and ordered to go on morale-boosting tours, much like Steve and his red-white-and-blue dancing girls. Although the musical numbers are fabulous, Fred Astaire does not punch Hitler.

During the war bond montage, Cap is seen leading the charge in a propaganda film. For this film, producers Hal Wallis and Jack Warner were approached by British Commonwealth Air Training Plan to undertake a “patriotic film.” Their James Cagney vehicle served to highlight the ongoing efforts of the Royal Canadian Air Force.

This adventure film was an adaptation of a 1950 book by Paul Brickhill. In the text, he relayed a firsthand account of the mass escape by British Commonwealth prisoners of war from a German POW camp in Nazi-occupied Poland. Much of the sequence when Cap rescues Bucky and his squad alludes to this, and later there is a direct nod to Steve McQueen’s iconic motorcycle.

After liberating Bucky and his squadron in Italy, Cap and the team return to London where shots of airplanes fill the skyline. In real life, London was hit hard by the Blitz when Germany heavily bombarded the city from September 1940 until May 1941. This drama follows American pilots William “Sky” Kelly (Donald Stewart) and his playboy friend James “Jim” Spence (Richard Greene). The duo puts their personal drama aside after they join the RAF and volunteer for a Flying Fortress bombing raid on Berlin. 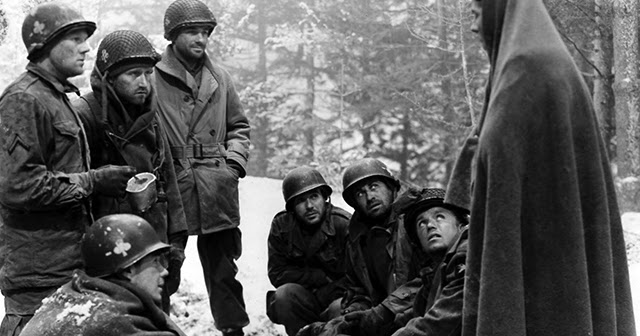 Made a few years after the war, this ensemble drama shows the everyday camaraderie of a regiment in the 101st Airborne Division. Like Bucky’s squad in The First Avenger, we see the vulnerability of the soldiers, but also their courage and steadfast commitment to the greater good.

While in London, Cap, Peggy, and Colonel Phillips (Tommy Lee Jones) plot their raid on Red Skull’s fortress in order to destroy the weapon he is creating. Similarly, in this ’60s adventure, Allied Intelligence plots the infiltration of Navarone by a group of commandos in order to destroy guns that have been targeting Allied naval ships in the Aegean Sea.

In this adventure film, Richard Burton and Clint Eastwood star as Allied Commandos who disguise themselves as Nazis. They paratroop onto a snowy mountain castle in order to rescue a U.S. Army Brigadier General. Like the squad in The First Avenger, their team is made up of Allied forces from various countries, all drawn together for a shared mission.

While most of The First Avenger takes place in America and Europe, the film does draw some influence from films set in the Pacific. Much like Cap’s mission, America’s first retaliatory air strike against Japan, Doolittle’s Raid was a secret mission led by volunteers. It also seems that both Evans and Tommy Lee Jones studied the acting of Van Johnson and Spencer Tracy in this film. 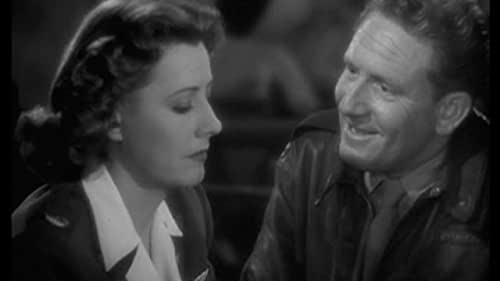 This romantic fantasy follows a reckless pilot Pete Sandidge (Spencer Tracy) flying out of England, who is in love with Air Transport Auxiliary pilot Dorinda Durston (Irene Dunne). When Pete’s plane goes down, he finds himself not quite dead. Then, “The General” (Lionel Barrymore) orders him to pass his knowledge down to Ted Randall (Van Johnson), a spry young pilot who later meets a grieving Dorinda. If only Cap and Peggy could have had some divine intervention in The First Avenger!

Cap’s tearful goodbye to Peggy is almost a shot-for-shot comparison to a scene in this powerful romantic fantasy. Returning from a mission in Germany, RAF Squadron Leader Peter Carter (David Niven) has one last teary conversation with June (Kim Hunter), a radio operator at a USAAF base as his plane begins to crash. When Death misses him due to the thick fog, he and June reconnect and fall in love. He then must go to celestial court in order to stay with her. Cap and Peggy deserve!