Can You Solve The Mysteries of the Dresden Files Co-Op Card Game? - Nerdist

Can You Solve The Mysteries of the Dresden Files Co-Op Card Game?

When I was first asked to do a review of Evil Hat’s new Dresden Files Cooperative Card Game, I politely declined. I’ve played a lot of games as a game designer, but some of the worst experiences I’ve had were playing licensed games where I was unfamiliar with the source. Those bad experiences were made because the rest of the players would be making in-jokes or speculating about future storylines and I would be sitting bored, waiting for my next turn or scene. I thought I wouldn’t be able to give the game a fair shake since I’ve never read the books or seen the TV show.

I was wrong. So very, very wrong.

The Dresden Files Cooperative Card Game is a cooperative card game where up to five players try to beat a deck based on one of the first five books in the series. Solve, perhaps, is a better word, since it’s more of a fit with Dresden’s gumshoe milieu and is a better description of how the game works. Each deck is laid out in full on the game board and players take turns playing cards to try and get investigations completed and bad guys removed. There are also obstacles that inflict brutal penalties against the players until they are removed and advantages that help out the players if time is taken to grab them off the board. Players are very limited with how many cards they can play, which makes the game feel like one of those puzzles where you only have a limited number of moves to get the pieces into place.  Each turn a player must choose between playing a card by spending the communal pool of resources the players have to play cards called Fate, discarding a card to restore Fate to the pool, passing and watching a point of Fate trickle away, or using a once per game talent that’s powerful but often conditional.

I’m a designer who believes that theme is important. If a game is about exploring a spooky house, I want to feel like I’m opening creaky doors. If a game is about being a king leading my army, I want to feel like I’m watching epic battles unfold. The puzzle game nature of Dresden Files Cooperative Card Game fits an investigation game like a rumpled old trechcoat. It doesn’t take long for the players at the table to feel like everything’s lost before a vital play (or combo of plays) unlock chunks of the board like a major clue of the mystery falling into place. Thanks to this game, I have said “A-ha!” in real life, and that’s the best recommendation I can make for a detective themed game. 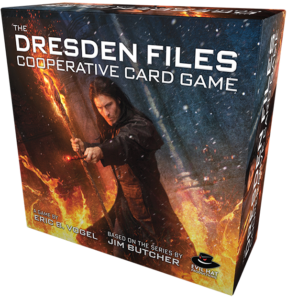 Many of these moments are due to the different make-ups of the character decks. Some decks have more cards aimed at investigation, some decks are better at battling foes and so on. Each deck also has a special ability that triggers when a card is discarded, so a character gets Fate for the team but a little extra bonus flavored to their character. Different characters must solve the mysteries in different ways, but one player always has to play Harry, since it’s his name on the box. (He’s kind of a jerk that way, apparently.)

The base game comes with five character decks and five scenarios to play, but thanks to last year’s phenomenal Kickstarter, the game will be launching with three expansions available, as well as some unique promo items available through the Evil Hat website.  Each of the three expansions—Fan Favorites, Helping Hands and Wardens Attack—offer two new characters and two more book decks for fans to play. Fans of the world will also find copies of the original Dresden Files RPG and the new Dresden Files Accelerated RPG available from Evil Hat.

Dresden Files Cooperative Card Game comes out on June 14th for the general public, either directly from Evil Hat or through your Friendly Local Game Store. It might even turn you into a fan of the series if you haven’t read the books. I’ve got several loaded up for our family road trip this summer so I can know more about the characters I enjoy in the game. It’s a great game for fans of the books, fans of co-operative games and fans of puzzle games. In a summer full of hot releases, this is the only one that’s truly fuego.

What is your favorite Dresden book? Let us know in the comments.