Buyer’s Guide – Quality of Life Upgrades for Board Game Night

The holidays are coming up! Many gamers are making their lists and checking them twice, ready to give them to friends and family to make gift giving easier. We’ll have a lot of game roundups this year, but what if you want something that isn’t a game?

Maybe your shelves are already full to bursting, or maybe you’ve managed to resist the siren song of new games. Either way, here are some “Quality of Life Upgrades” to add to your list this year. They won’t add cardboard to your shelves, but they will make the time you spend playing more enjoyable.

Game Trayz is known for their vacuum formed plastic inserts. Their inserts can be found beautifully organizing Wasteland Express Delivery Service and making The Reckoners easier to set up and play. They have inserts for other games as well but one of my favorite products are their Treasure Trayz. These little bowls are perfect for holding all the tokens, bits, cubes, and other assorted gaming components while you play. They stack and have lids as well, if you want to use them for permanent storage. My favorite use is to keep a stack of all-purpose Treasure Trayz handing on game night and use them no matter what we’re playing. 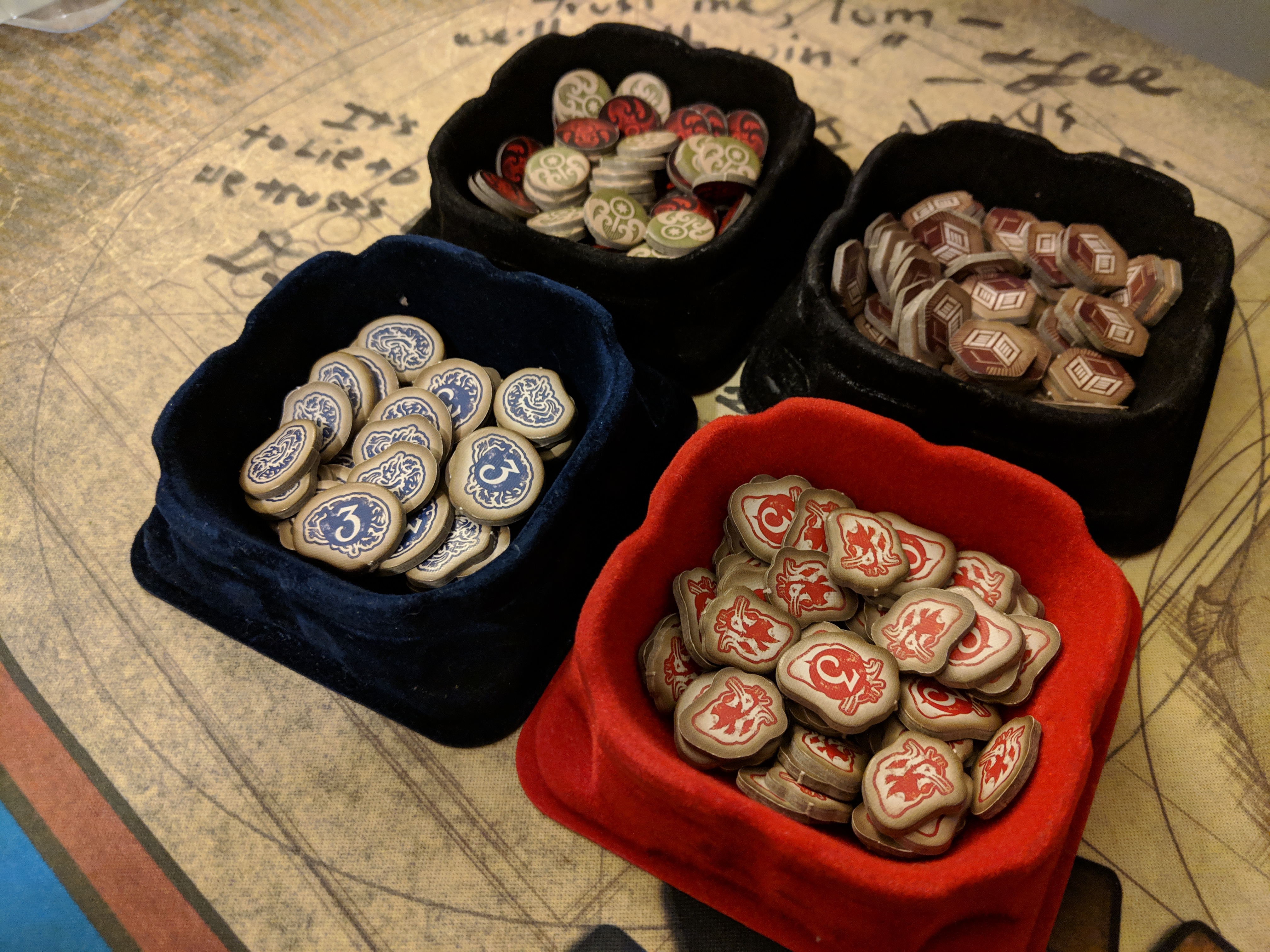 If you’ve roamed the halls of a gaming con recently, it’s likely you’ve seen one of the ubiquitous black Quiver cases. These slender cases are great for holding a playmat and a deck or two for your games of Legend of the Five Rings or Keyforge. They’re also perfect for transporting a lot of games. I’ve held up to 16 games at once in my Quiver, keeping them all ready to play and sorted using the included dividers. There’s a reason so many people have them. It’s a must-have accessory for game nights and game cons. 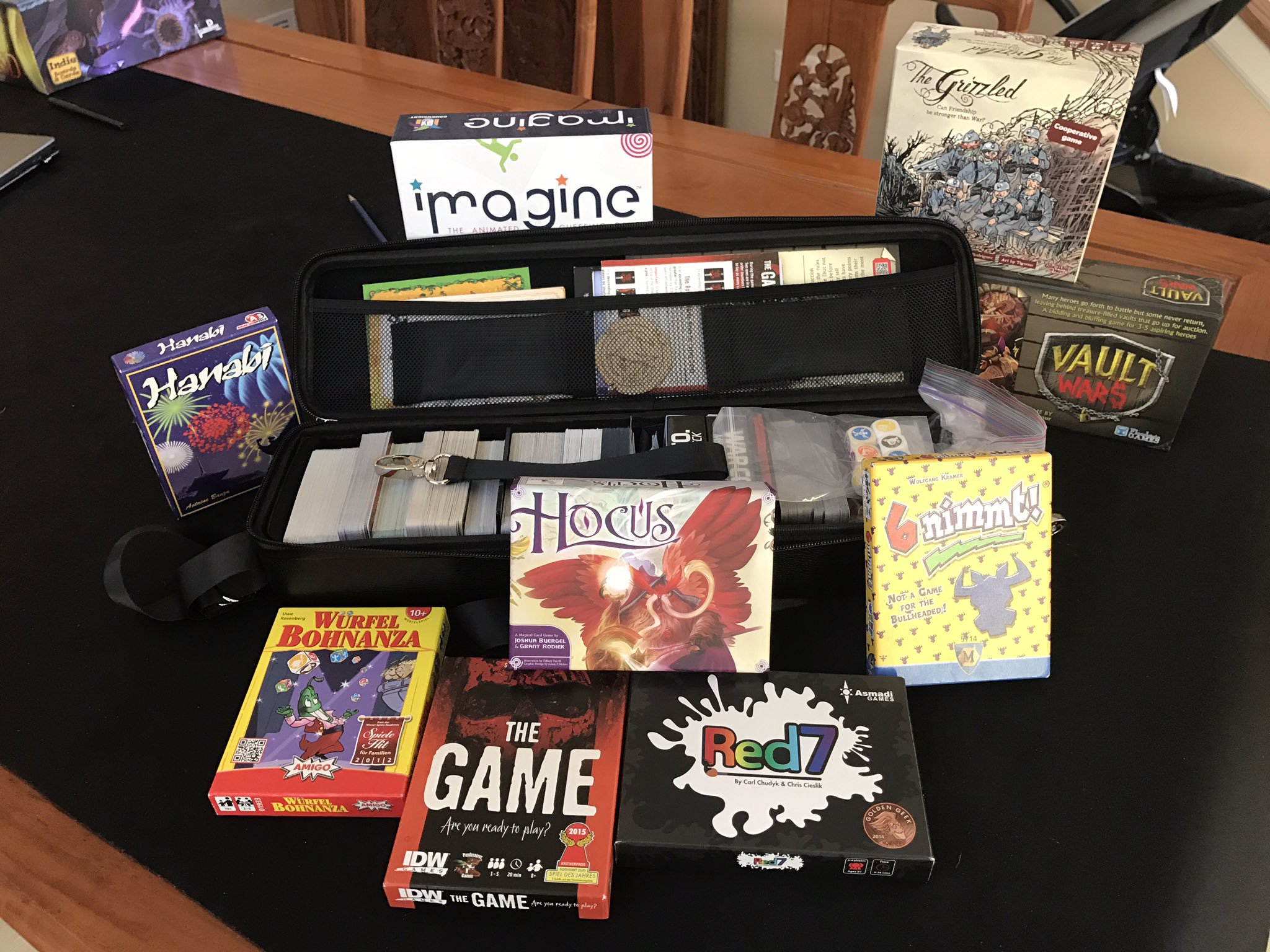 Maybe you’re looking to carry more than a few cardgames. In that case, you want the GeekOn! gaming backpack. This thing is a beast, capable of comfortably carrying Gloomhaven and a few extra full size board games. In fact, it’s almost not fair to simply call this a backpack. In its standard configuration it fits in an airplane carry-on bin, but the GeekOn! can expand up and out allowing you to fit even more games.

GeekOn! was great enough to send me one, and honestly, I’m impressed. I carry my miniatures in foam trays; in the normal configuration I can fit 1 or 2 trays of  Warhammer Underworlds minis and the game box. Expanded I can take an entire 2,000 point army of Space Marines and all the dice, tape measures, and books I need. There’s even room for a dice tray and laptop. Side pockets stash everything from phone chargers to small box games, and the various straps and other attachments can be used to carry playmats and water bottles. There are a number of accessories available as well but my favorite is the QuadPack. This can be used to consolidate a number of board games into 1 smaller bag, which will be perfect for my holiday travels. They advertised this as the Ultimate Gaming Backpack and it absolutely lives up to that moniker. 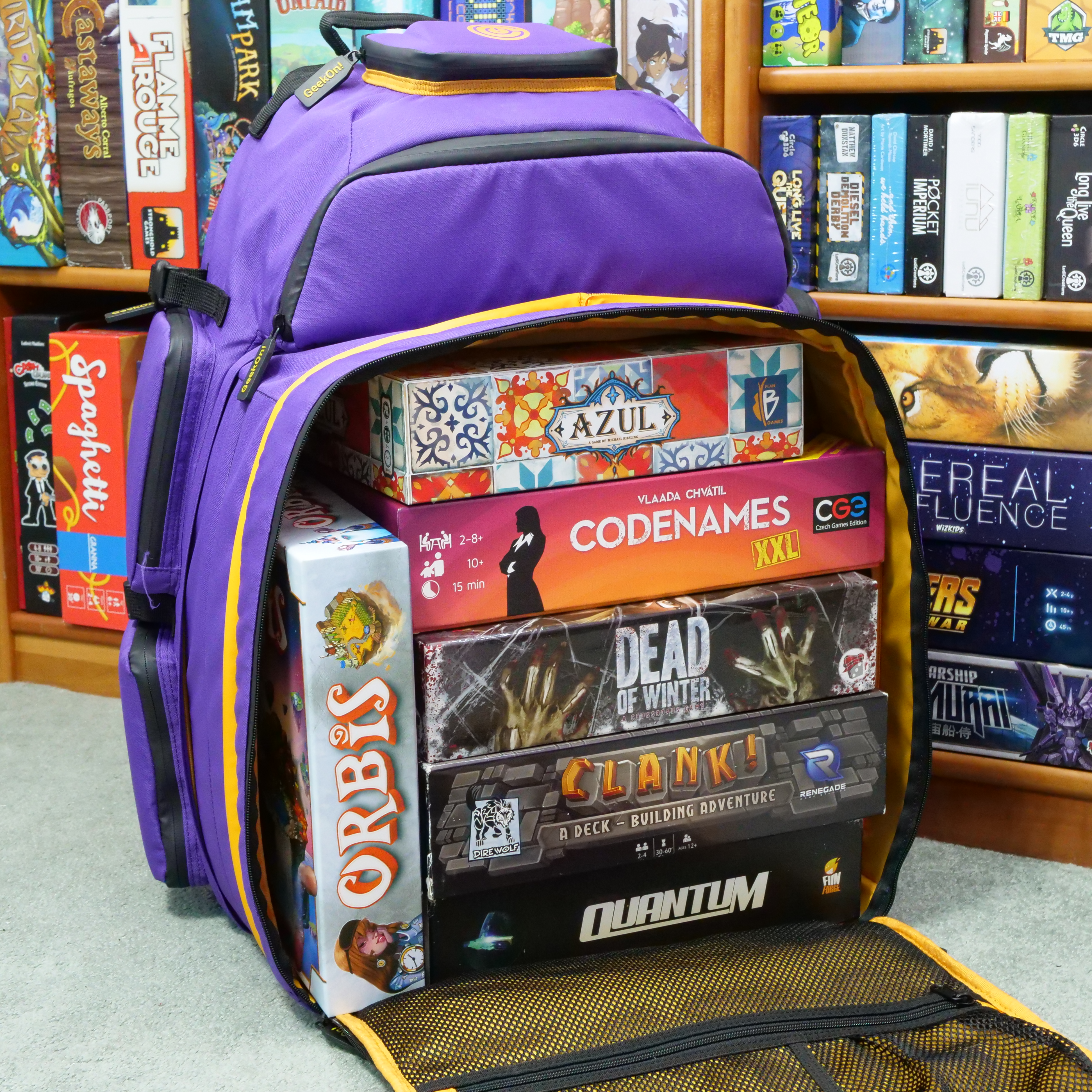 It’s been almost a year since we first told you about The Dresden, the first board game table from furniture craftsmen Bandpass Design. In that year they’ve built almost 20 tables of various sizes and design styles. They’re still my favorite on the market – in fact I purchased one myself and am eagerly awaiting the day I get to roll dice on my very own. I love that each table is made by hand by a small group of craftspeople, but what I love the most is how versatile it is.

The standard table is large enough for a full 6’x4’ game of Warhammer 40,000 or Age of Sigmar. Take off the tops and there’s a sunken vault for everything else on the shelf. Game tables may be the ultimate game night upgrade, and Bandpass makes a beautiful table. 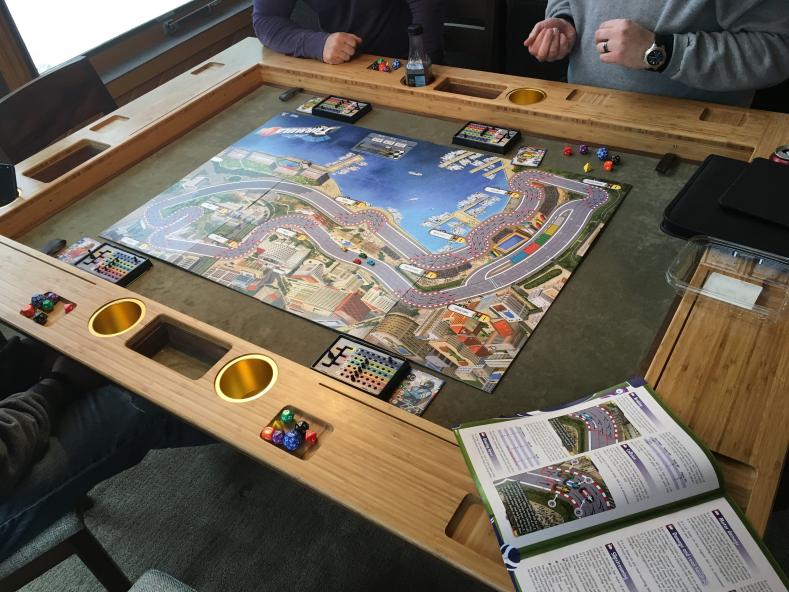 A sample backpack was provided by GeekOn!.