Players have a lot of decisions to make when they put together a Dungeons & Dragons character. Spell choices, weapon choices and where to put ability scores influence how a character comes together mechanically. But what about the fictional side of the character? In D&D, the Background choice offers some mechanical support for what a character as before they became an adventurer, but it doesn’t tell the whole story. A character with a good background can give a Dungeon Master several wonderful ways to hook a character into dashing into danger. 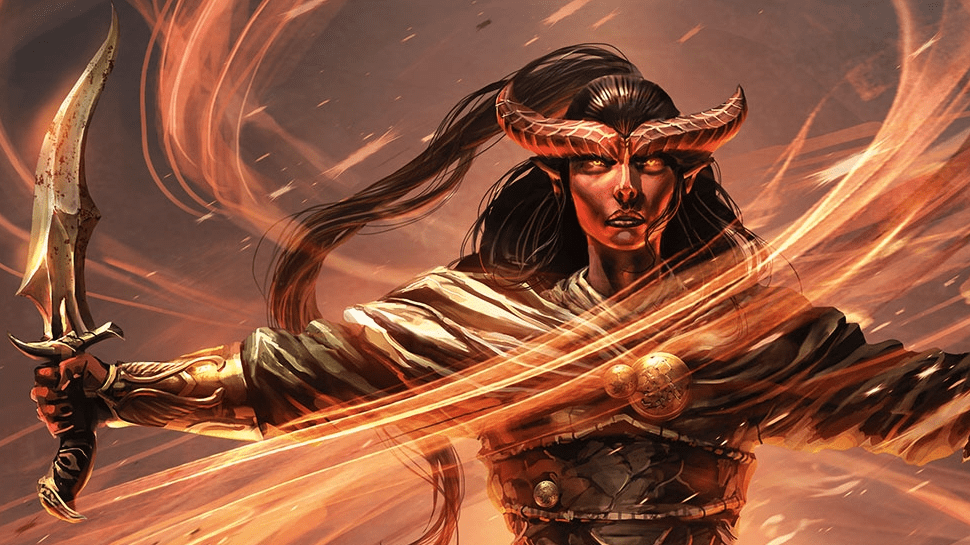 A useful background doesn’t have to be a full-fledged biography about a character’s life before 1st level. Most serial stories take their time to spool out juicy bits of background info as the story unfolds. Sometimes it makes more sense to leave specific elements open so that they can be filled in by information informed by what happens in the game. This series of articles offers five background questions for each class that a player can answer with a few short sentences whenever they want (yes, we’ll be doing one for each class). Players can answer these questions ahead of the first session, or DMs can facilitate this character building exercise with a session zero.

Who Approached Whom About Making The Pact?

Warlock characters have a unique place in D&D games. They get to define a relationship with a powerful member of their world right out of their gate; their patron. Most relationships are complex, to say the least, but this question can put things into perspective. Did your character fall to their knees inside a summoning circle ready to make a deal? Did your Patron sense a desire that it could fulfill for your character?

What Does Your Patron Get Out Of The Deal?

Your immortal soul is nice and all, but it seems like small potatoes in a fantasy world full of powerful dragons and CGI-budget-busting magic.  Your warlock gets cool spells, class features and invocations, so surely the patron must be getting something beyond some ill-defined sense of service. Does your patron get a bit of the life force of each creature you kill to sustain itself? Are you hunting artifacts that can allow your Patron to eventually cross over into the Material Plane? Did you offer your life in exchange for someone else’s, cursing you to immortal servitude to protect someone you loved?

Are You Your Patron’s Only Pact?

If you are the only being that’s sworn yourself to your patron’s service, that makes your character unique. It also likely makes your relationship more personal and your patron more likely to interfere in your life to protect its investment. If there are other warlocks that serve your patron, how do they feel about you? How do you feel about them? Are you all allied with your patron’s goals or are there factions within your fellow warlocks that act as rivals to your cause?

Who Is Unhappy With Your Bargain?

There’s probably some bad reputation news associated with signing a pact; otherwise, everyone would have done it. Is your character hunted by an organization? Perhaps a church or a sect of paladins? Why do clerics or paladins in your groups keep you around then? If not demon hunters, who in your life reacted in horror when they found out what you did? Are you trying to win them back?

Is There An Escape Clause?

Any contract can be broken, even one signed in the blood of ancient demons. One side just has to be willing to pay the price. What could your warlock give their patron to get out from under their service? Perhaps a massive pile of gold? What must the patron do to rid themselves of your warlock? Is there anyone powerful enough to intervene if one side wants out and the other doesn’t?

Tell us the best tidbits of your warlock’s backstory in the comments below!