Build Your Kids’ Character (Sheets) With No Thank You, Evil! - Nerdist

Build Your Kids’ Character (Sheets) With No Thank You, Evil!

If you’ve been looking for an age-appropriate way to get your kids to take their first steps into the larger world of role-playing games, No Thank You, Evil! is a fantastically creative option. The new game from Monte Cook Games, aimed at kids 5 and up, emphasizes imagination and storytelling in a robust and ingenious setting that appeals to everyone in the family who loves to play pretend—even the grownups. 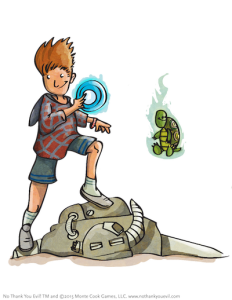 No Thank You, Evil! takes place in the mythical island of Storia where just about anything can happen. Home to dinosaurs, witches, pirates, robots, monsters, and many more colorful characters; Storia is a magical place that can be entered when you venture under the bed or into the back of the closet.

Here a group of kids can embark on an adventure where the Guide, usually the parent or older sibling, introduces them to a non-player character with a problem that needs their help to solve it. The group then tells the story together as they complete the adventure.

Along the way they roll dice, spend points from their characters’ trait pools, and use their pet companions’ special skills to face foes or solve puzzles.

Here are three reasons you and your family should journey to the lands of Storia.

Setup is Almost as Fun as Playing

No Thank You, Evil! is designed for small groups of players. Once the game pieces and characters are created, it should take at least 30 minutes to play. But like any good role-playing game, there is some preparation and set-up to get the most out of your gaming time together. Guides should spend some time with the rule book to get acquainted with Storia and its inhabitants, but the book is so detailed and packed with colorful illustrations that it won’t take long to get a good feel for the imaginative world.

Kids will love to flip through the rulebook to make their own characters just the way they want them. In No Thank You, Evil!, characters are set up with a simple sentence. “I am a Fantastic Kid” or “I am a Sneaky Astronaut” unlocks special traits and abilities that they fill in on their character sheets.

Characters can scale to the age of the player, so they can make a basic sentence (“I am a Superhero”) or even add a verb to add an additional ability (“I am a Cool Wizard who Sings and Dances”).

Next, players choose a companion with its own abilities, giving it/he/she a name and drawing how it looks on the character sheet.

If your kids are usually short on patience, character creation can be one session of playing on its own. When they are ready to jump into an adventure, it’s easy to get started.

It’s Easy to Be a Guide, Even if You’re a Newbie

No Thank You, Evil! is so creatively fleshed out and well-presented that the accompanying adventure book comes packed with story prompts and ideas ready for you and the kids. In fact, your first foray into Storia even comes with text to read aloud if the Guide isn’t feeling up to Matt Mercer’s level of awesomeness yet. The adventures come with age-appropriate levels of puzzles and baddies for the party to take on (or just talk to), and descriptions of how NPCs might interact with players.

The text for your first adventures even includes the goal numbers so the Guide and the players know numbers to roll and which trait pool points to spend. If you’re the Guide, just read through the adventure first before settling in at the table to play together, and you’ll be ready for whatever the story might bring.

The Game Scales for Adventurers of All Ages 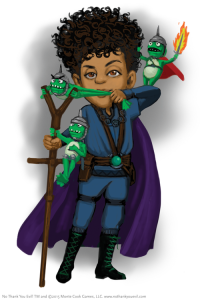 If you’re sitting down with the kids and one is 5 years old and the other is 10, you might worry that interest will wane quickly. No Thank You, Evil! keeps kids of all ages in mind. Not only does character creation come with three different levels of character sheets (included in the box) that scale the complexity of skills, the adventure book suggests ways to encourage the imaginations and strengths of different players.

For younger players, you can give choices rather than ask open-ended questions when a problem presents itself. Older players in the same game can use their characters from previous games and level up their trait points or buy equipment to add even more abilities at their disposal.

Advanced players might be on the hunt for a more challenging foe, but if the younger player is unsettled by, say, Zombie Ninjas, that’s where the name of the game comes in. Kids who need a break from a scary situation can say “No thank you, evil!” to put the action on pause. The Guide then decides if the younger player might just need a short break or if something should happen in the game to make them feel less intimidated.

No Thank You, Evil! feels thoughtfully crafted to include players of all ages and abilities in a comfortable role-playing experience. If you’ve longed to take your kids on a fantastic adventure, the box comes with just about everything you need to get started in a story created by your collective imaginations.

Have you ever role-played with the kids? How did it go? Let us know your tips!

A promotional copy was provided.