Fief: France 1429, Or The Game Where One Of Your Characters Can Suddenly Become Joan Of Arc - Nerdist

Fief: France 1429, Or The Game Where One Of Your Characters Can Suddenly Become Joan Of Arc

For some of us, the threat of dysentery on the Oregon Trail is mere child’s play. We’d much rather experience the thrill of the plague looming over our heads, and one recent board game is more than willing to supply all the medieval disasters we could desire.

Fief: France 1429 is the perfect gateway game from classic friendship-ruiners like Risk to those historically based, 4-to-8-hour monsters like GMT Games’ Here I Stand. If you ever find yourself wondering about the family politics behind your worldwide hostile takeover, you’re in luck. 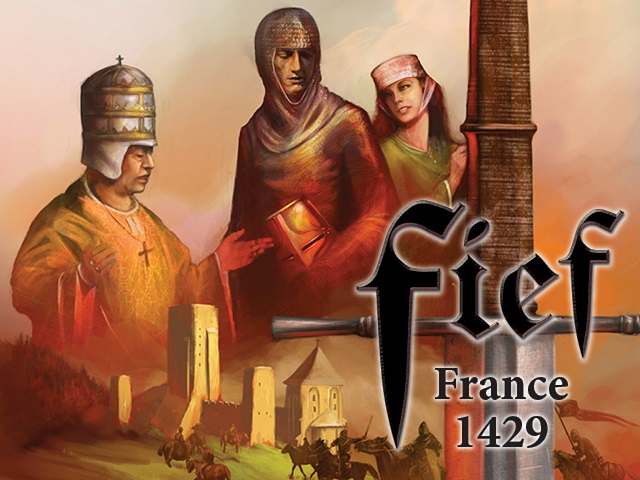 Based on a beloved French-language board game from the 1980s, Fief began with a Kickstarter in early 2015 and was eventually published by Academy Games later in the year. This updated English version includes an expanded set of rules, cards, and map. The overall goals of Fief are to gain noble and religious titles for your family and to expand your forces on the map. What really makes Fief unique, though, is the story it enables you to craft for your family. In the game, each player starts by drawing one of the eighteen available lords to begin their family. Each lord has his or her own name and unique appearance, and you could easily entertain yourself solely by imagining personalities to match.

See the guy near the middle wearing heavy armor underneath what looks like a blue patterned bra? His name’s Othon. I made him the Pope once.

You can draw (or, birth, I guess) up to four male or female family members, depending on the cards. Holding their fate in your hands, you then decide whether they are meant for battle, nobility, or the church. Of course, just like the time period in which the game is based, there are restrictions in place for the titles women can procure. While only males can gain ecclesiastical titles and potentially become the Pope, your ladies are still allowed landed titles such as duchess or countess by the grace of men’s everlasting generosity.

That’s fine. We didn’t want to be Pope, anyway… We’d much rather gather up the righteous mantle of Joan of Arc and lay waste to your puny man armies. (No bitterness here.) If you draw the game’s “d’Arc” card, one of your ladies can become [insert her name here] of Arc, suddenly unable to marry, yet gaining some wicked combat benefits sure to send your opponent running for the hills. 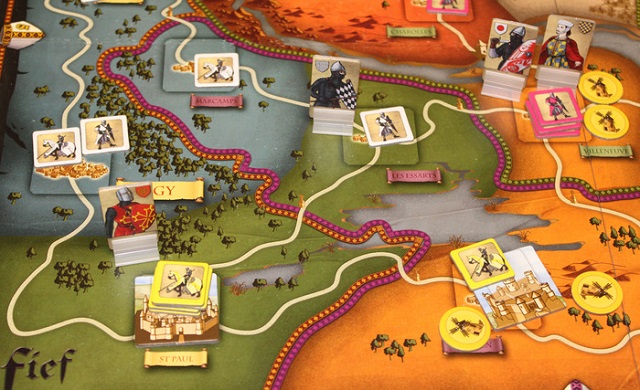 If your other ladies aren’t lucky enough to be literally chosen by God, your best bet is to prime them for marriage to another family. After some bartering and negotiating, you can join forces with another player by setting up a match made in heaven. All joking aside, marriage is a fantastic storytelling element of this game. As allied families, you need more combined titles in order to win, but one marriage usually begets another as the other players band together to slow the progress of the first alliance.

By the end, your lords have become cardinals, baronesses, the Pope, and even the king and queen of France. These characters you have created are your family, and their success is your success. For gaming newcomers and experts alike, Fief offers the opportunity to craft a cohesive narrative of your family’s legacy using the time-honored tabletop traditions of political negotiation and area expansion.