Build for Science With RobotLab! - Nerdist

Build for Science With RobotLab!

Having an army of metallic minions to aid in global conquest is a noble goal. Getting that army means building them first. Every mad scientist starts off with their first creation, screaming “EUREKA!” at the heavens. That’s where RobotLab comes in. A STEM-inspired card game where you and other scientists race to build your first robot.

In RobotLab, you’re a scientist racing to build your first robot to win the coveted Devol Prize in Robotics. To do this, 2-5 players pick which color their robot will be, and take turns assembling them. Digging through trash, dealing with malfunctions, and sneaking into your competitors lab for time-honored scientific sabotage are the name of the game. Doing all of these things is simple in the game, and it’s easy to play for kids while it scales up to Machiavellian ruthlessness for adults. Sneaking into another scientist’s lab and installing a green leg on their red robot is just downright rude.

The game itself takes about 15 minutes to play per round, and the aim is to build a humanoid robot. As in, you must attach a head, two arms, and two legs. What matters is not functionality, however, as our scientists REALLY care about their paint jobs. Once you start off with a green robot, all appendages must also be green, or fantastically rainbow colored. Each turn; you play a robot part or take a more scientific action—like digging through the trash for spare legs.

The first person to have a working robot with matching colors wins. That clear path to victory makes RobotLab adorable. Yet the devil is always in the details, isn’t it? Nobody ever said you had to build parts on YOUR robot. Building the wrong parts on someone else’s chassis forces that scientist to disassemble, or trying to salvage in the trash for thrown away parts. Yet no matter what happens with the action cards, the game maintains a slick game play.

I’d describe the game as a tempo game more than anything. It’s always in your best interest to play your cards, whatever they are, and refill your hand. There’s a handful of reaction cards that affect everyone and are played out of sequence. Timing your actions and reactions pave the way to victory. This makes the game scalable in strategy, without being complex. 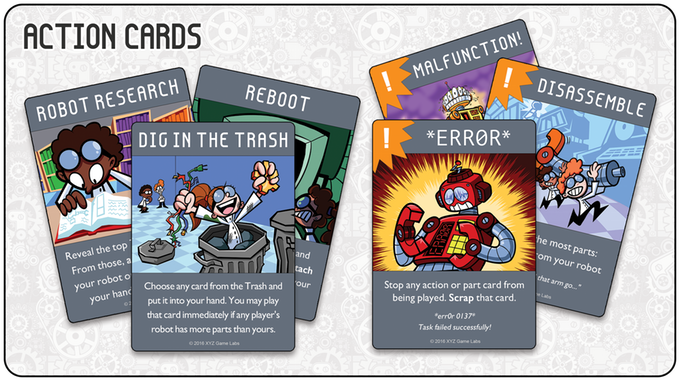 As of right now, RobotLab has reached its Kickstarter goal and will be released after production. There are still a few stretch goals left to hit (like a Mad Scientist addition) and plenty of other perks for picking it up early. Its Kickstarter campaign page has all the information about the game, including videos, rules, and more awesome art. It’s important to note that the game is EU friendly and they have it set with no customs charges and VAT is already taken care of. You can also follow the team behind Robot Lab @robotlabcg.

Have you found any neat STEM-based card games or have had a shot to play RobotLab at a game store? Let us know in the comments below!