Finally we have something to go cuckoo for besides Cocoa Puffs. Let me tell you about a game where you take a jumbled mess of sticks and build a nest fit for a schizophrenic avian. Over a cool 10 minutes you delicately place the elongated dowels and use them to create a crisscross pattern to hold your eggs. If by a twitch or bump you displace those already nestled in the nest, well then you collect them and get back in the trenches. Such is life in HABA’s Go Cuckoo.

Like most dexterity games of family weight, this one is a simple exercise that requires a bit of precision and a healthy sense of humor. Even the littlest of hands can perform the necessary motor functions to pluck a stick from the tin can and then align it horizontally – in some respects, children have an advantage weaving between the obstructions.

Mechanically it’s very simple. You pull a dowel from the can and look at the color on the bottom end. If it matches the color on the top end, you’re good to go and can place it sideways in the nest. If it’s a different color, then you’re required to draw another stick matching this new shade. If unlucky once again, well then you draw a third stick before finally being allowed to place all three regardless of the outcome.

Drawing and placing more sticks is undesirable because it causes more interaction with the mish-mash of vertical and horizontal nest pieces. The more you jostle our communally built poor excuse for a bird’s nest, the more likely previously placed eggs are to fall. There’s a solid amount of tension here without it being overwhelming or suffocating.

When eggs roll off the sticks and fall outside the can, the offender is required to collect them. If any fall inside the tin then you must take an existing egg from each other player. This is, of course, bad because you’re looking to unload all of your eggs in that most uncomfortable of nests. Eventually, someone will and then they must place the cutesy bird meeple atop the rickety bed and hope for the best. Voilà.

Go Cuckoo is perhaps not as flashy as Dragon’s Tower or as uproarious as Boom, Bang, Gold, but it sits in sort of a nice middle area. It immediately draws similarities to the classic Kerplunk!, but it brings a modern touch alongside a reverse mechanism of placing instead of pulling.

There’s a solid amount of joy in weaving those skewers between the supports of the flimsy structure. It’s a process with skill requirements that can vary wildly. This provides emphasis to the evaluation portion of the game where you’re eyeing up the nest and looking for gaps to exploit.

While going the tin can route instead of a box can be annoying for storage concerns, it’s hard to argue that HABA doesn’t make the best of it here. The can itself is popped open and the whole thing is pretty much ready to go.

Working hand in hand with that platform is the visual development of the design. As the arc of play develops the amusement of the nest does as well. It’s a spikey, half-ugly thing that looks completely chaotic and random. This is harnessed to provide the challenge in deftly placing each piece and it all comes together pretty well for a satisfying experience. 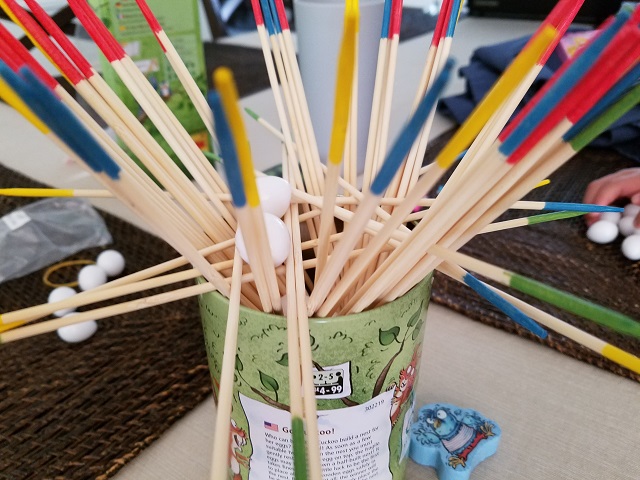 Beyond the obvious positioning as a family game, Go Cuckoo proves a solid contender for a group of more entrenched hobbyists. It’s a skill based game and quick enough to properly bookend a night of more grueling activity. It also performs admirably under the fog of intoxication, heightening the humor element ingrained in the genre.

Whatever your intention, Go Cuckoo delivers a solid gaming experience that is ultimately flexible. It’s easy to get to the table and a sure bet to appeal to most tastes.

What are your favorite family games? Let us know in the comments!  And be sure to join host Becca Scott on  Game the Game every Thursday here on Geek & Sundry to watch the best boardgames played with fantastic guests!