With Essen Game Fair just around the corner, we had our hands on a game making its debut there. If you want to keep up with the coolest games in tabletop, look no further than our tabletop game show Game the Game hosted by Becca Scott every Wednesday at 4 pm PT on Twitch and Alpha.

The holidays are coming up and with them come fun gatherings of friends and families. As a board gaming evangelist, I never show up empty-handed. Games are great for bringing people together and I have a section of my collection dedicated games that are engaging yet simple to teach. This year I’ll add a new one to that section. Azul, published by Plan B Games, is a gorgeous game of mosaics that is sure to be a hit around my table this holiday season.

Players in Azul are tile-laying artisans, decorating the Royal Palace of Evora in resplendent tiles. While the integration between the setting and the gameplay is on the light side, it gives Plan B the excuse to pack the box with big chunky tiles – we call them the Starburst tiles – and bright art that will attract people to the table even though a turkey coma. Games are physical objects and I definitely appreciate it when publishers make attractive games so long as the gaming experience matches that care. 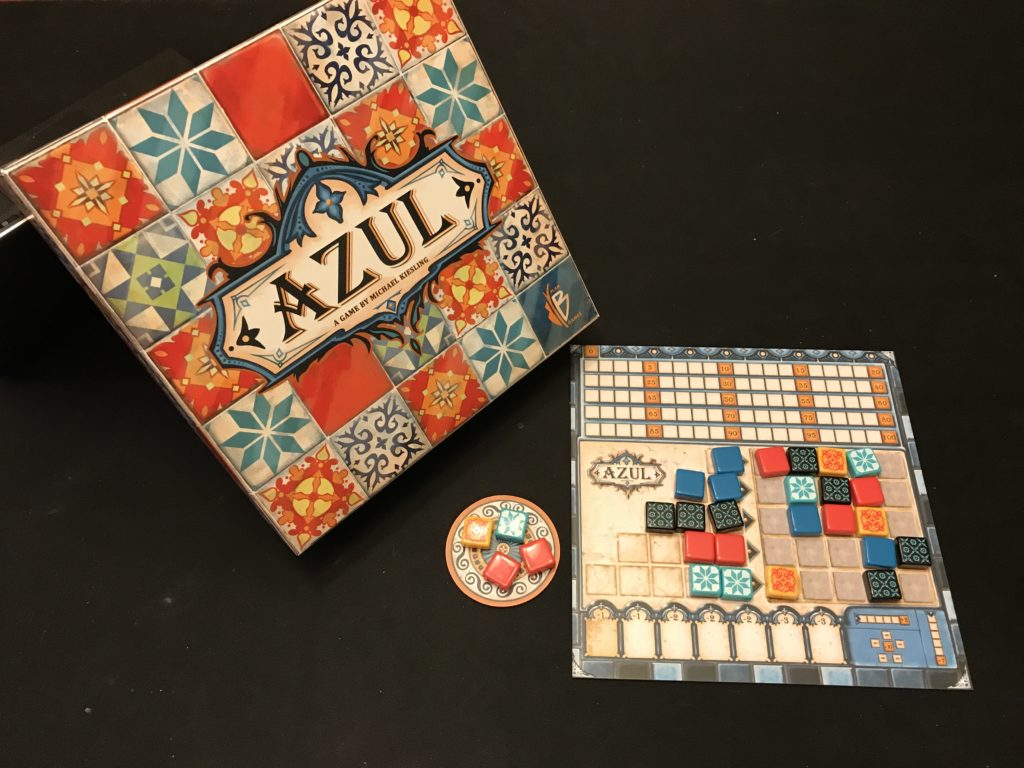 That experience is one of both construction and denial. The primary goal of Azul is to fill out your mosaic. We prefer to play on the side that dictates your pattern, though the more advanced free-form side is fun as well. This is done by accumulating tiles in a series of stepped rows. A row must be filled before you can place a tile in the mosaic and overfilling the row comes with penalties. This is what makes the game difficult and provides the opportunity for denial.

Tiles are obtained through a sort of draft system. They’re arranged on factory spaces on the board and players alternate taking tiles from the factory or from the center. The specifics of how this work mean that there will be times you are forced to take more tiles of a color than you need. Early in the game these tiles can flow over into other rows. No problem. But late in the game, when you’ve already got bright yellow tiles dotting your mosaic and you can’t fit them anywhere? That’s when things get tense. 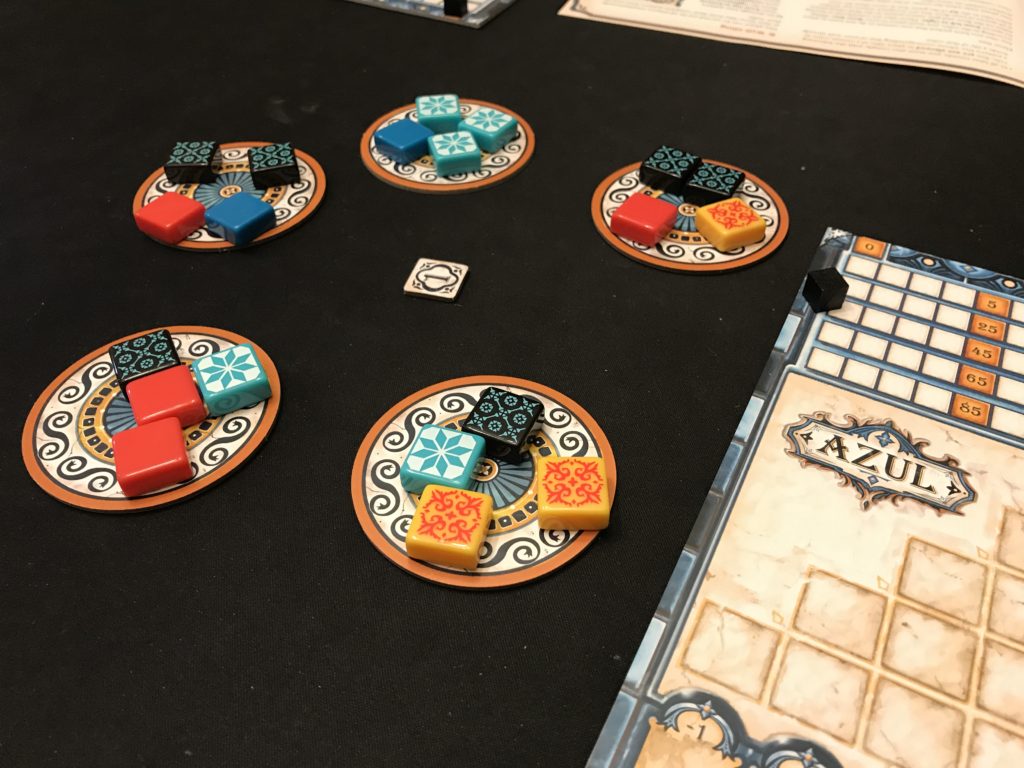 Suddenly you aren’t just taking tiles you need, you’re watching your opponents to see what they might do to you. Azul is a game where the scores are close. Every draft action is important and having a row to put excess tiles in can mean the difference between victory or defeat. Flooding the center with the blue tiles your opponent needs, forcing them to take too many can be a key move that sees you raised to the highest levels of aristocratic artistry. It can be cutting and calculating…but only if you want it to be.

See, Azul is one of those wonderful games that can be played as casually or aggressively as you like. You can take the time to examine everyone’s board, draft aggressively, and drive the game to end when it works best for you. You can also play lighter, focusing only on building up your mosaic and planning out your own strategy. The game doesn’t suffer at all for this – if anything playing too aggressively can slow it down – and it makes it an excellent choice to play with new gamers. Whether you win or lose you’ve got an attractive mosaic to look at and you can always shoot to improve your high score. 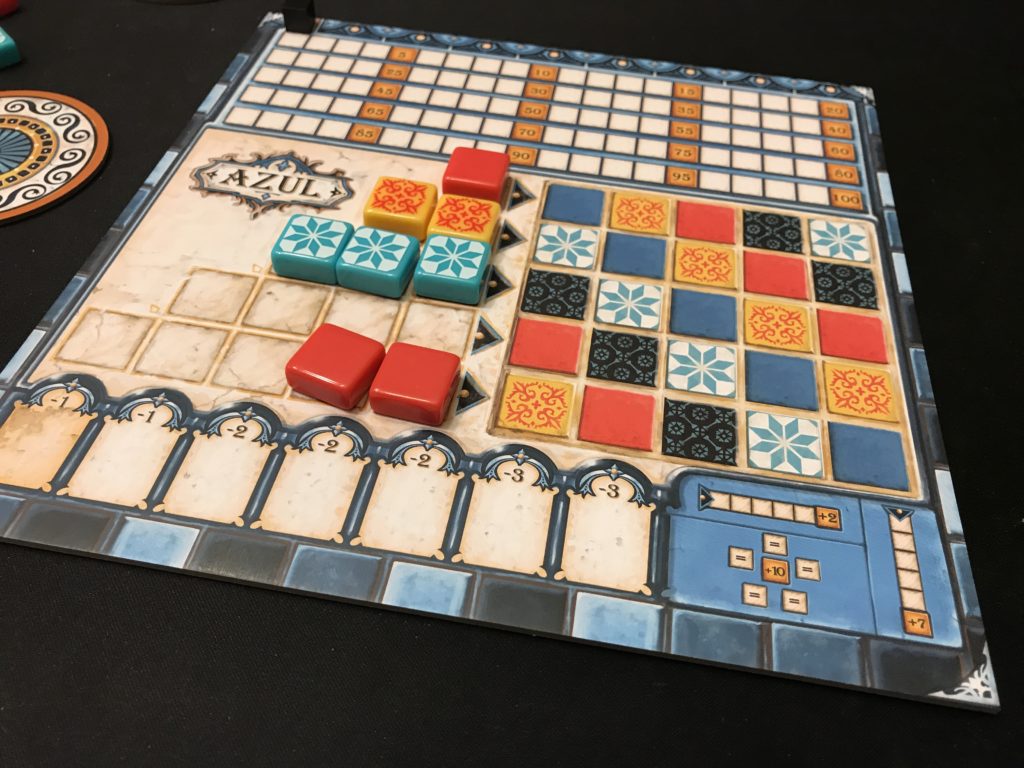 It’s also a game that works well at a variety of player counts. Strategy and tactics change when you go from 2 to 4 players, but it’s no less fun to play. Because the length of the game is in control of the players, it also ensures that multiplayer games don’t drag. With two players it isn’t uncommon to see 7 or 8 rounds as you chase high scores and can more readily see where you stand in relation to your opponent. 4 player games often end after 5 or 6 rounds but the game isn’t any less satisfying, it just changes your approach to one of a quick rush for points.

While some people may use the term “gateway game” dismissively, Azul shows why that shouldn’t be the case. It’s aesthetically appealing and welcoming, is easy to learn to play, and strategy can grow along with player familiarity. I’m looking forward to showing this one to my family. I’ll be happy to play it after dinner when I barely want to move, and again in the evening when the coffee has kicked and we’re ready to play for keeps (or the last slice of pie).

What are your favorite gateway games? Let us know in comments. To keep up with all the games you should be playing, as well as learn how to play them, look no further than our tabletop game show Game the Game hosted by Becca Scott every Wednesday at 4 pm PT on Twitch and Alpha.