Build a Beautiful Ocean Floor On Your Table in REEF - Nerdist

Build a Beautiful Ocean Floor On Your Table in REEF

Next Move Games has developed a crystal clear vision for their games: Simple rules, accessible depth, strong aesthetic appeal, and 4-letter names. Their first game, Azul, checked all those boxes and they were rewarded with 2018’s prestigious Spiel des Jahres award. Their second game, Reef, also checks all those boxes and it wouldn’t surprise me to see it in the running for 2019’s award. 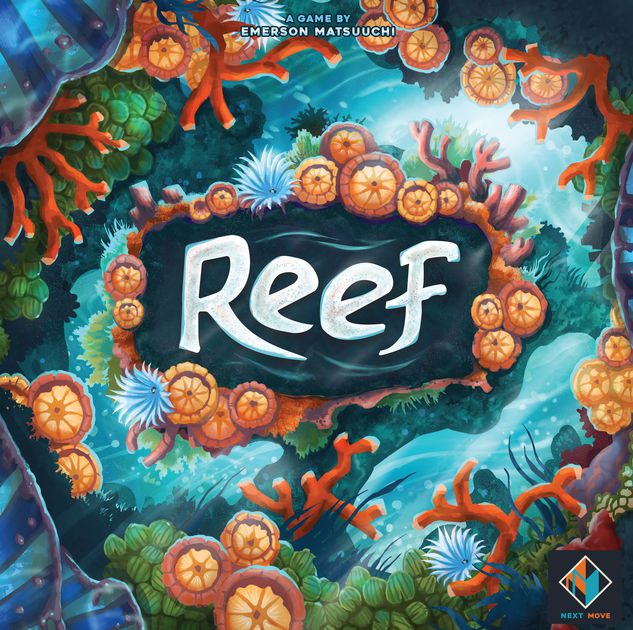 Reef is about building, well, a coral reef! Slowly but surely your multicolored reef will grow horizontally and vertically on your own personal board. On a turn, you’ll either grab a card from the center display or play a card out of your hand. Each card specifies which two coral pieces are added to your board and also scores points based on the geometric arrangement of the reef you’re already built.

Despite sharing those 4 broad characteristics, Reef is a different game from Azul and has earned its own spot on my shelf. Reef is a game of managing short-term tactics, building scoring combos, and reacting to the immediate situation with limited information about the future. Play is driven by cards but you’ll rarely see all the cards in the game so you can’t depend on the inevitable appearance of any specific card. This adds both mystery and uncertainty. 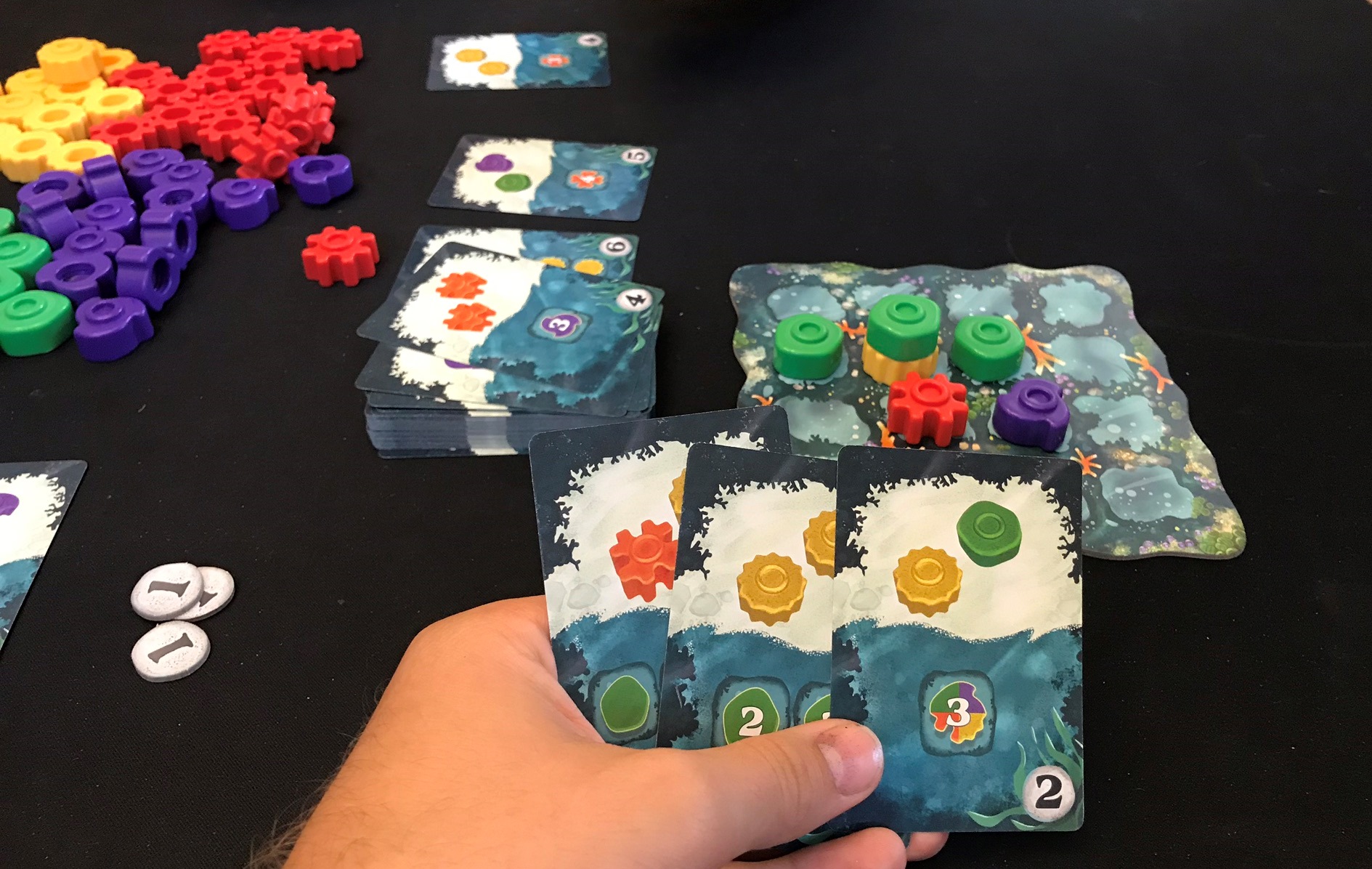 Unlike Azul, the rules for placing pieces are not very restrictive. They can be placed anywhere on the board with no limits due to adjacency or color matching. The only constraint is that a stack can’t be taller than 4 colorful pieces. Really, the only factors limiting your options are the scoring sections of the cards in your hand. Putting a piece on top of another effectively deactivates the one covered up.

While the side-view of your reef is an ever-shifting wonder of color and topographical interest, scoring is done by looking down at your board from a snorkeler’s eye view. Covering up a purple piece with a green one to score a card in hand may come back to haunt you when a card that scores for purples appears a few turns later. Few cards score points based on the same pieces they provide, meaning that placement has to be done with an eye to the future without eliminating your current scoring options. 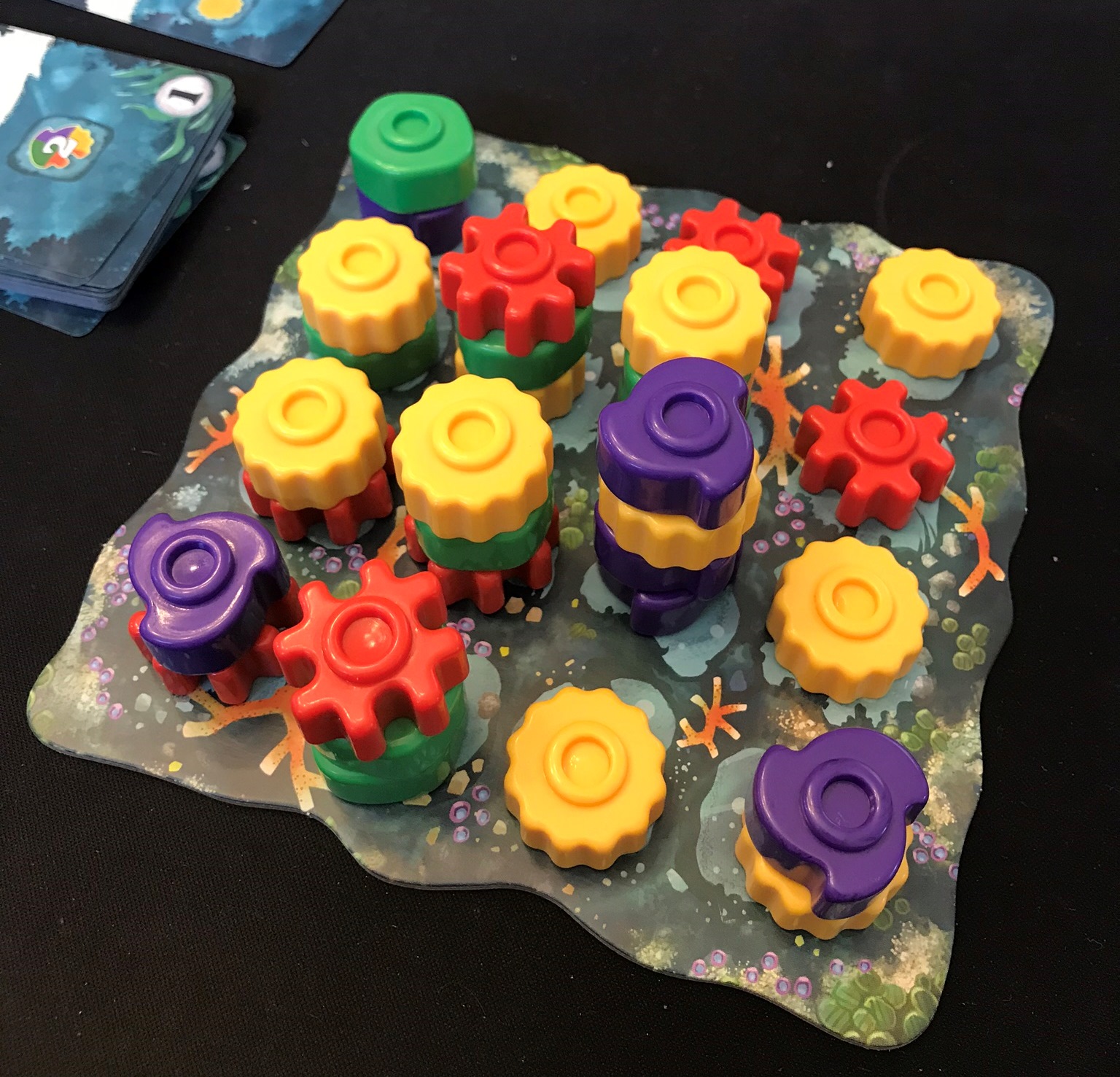 This shifting growth demands a flexible strategy. It also drives the primary tension of Reef. It’s possible to claim cards you think your opponents want, but you’re more likely to be blocked by your own actions. Points scoring ebbs and flows as cards flip out of the deck. The temptation to score now because you may not see a card you’re thinking about is strong. The struggle to be patient is real. The pain of missing out on big points because of choices you made earlier is biting.

A game of Reef is won by navigating the uncertain waves of points and construction. The tactical battle with yourself is sharp, yet accessible. Watching the growth of your reef is rewarding. Reef is a game for almost everyone, and its short playtime makes it easy to play again and again. Which is great, because you’ll want to.

Looking for more games to play with friends and family?