Bring the Disney Magic to the Tabletop With TALISMAN: KINGDOM HEARTS EDITION - Nerdist

Bring the Disney Magic to the Tabletop With TALISMAN: KINGDOM HEARTS EDITION

The classic tabletop game Talisman and the long-running role-playing game series Kingdom Hearts have surprisingly a lot in common. Both spin compelling stories and immerse players happily in their worlds for hours at a time. So the two make the perfect pairing in the recently announced tabletop game Talisman: Kingdom Hearts Edition, coming soon from The OP (formerly USAopoly) and Square Enix! 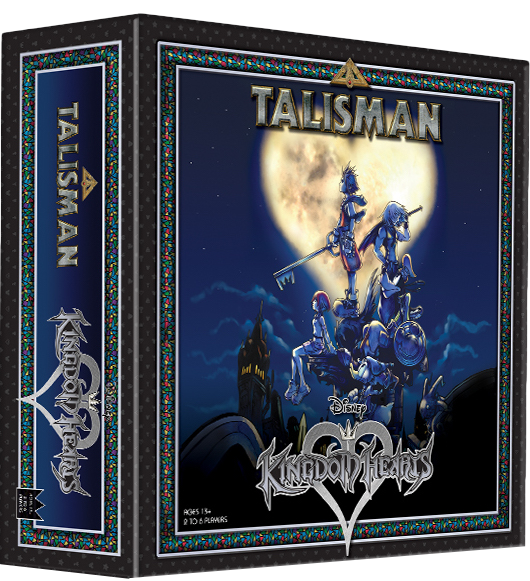 This updated edition of the game, expected to release later this year, is for 2 to 6 players. Instead of searching for the Crown of Command, Kingdom Hearts and Disney mainstays Sora, Kairi, Riku, King Mickey, Goofy, and more will be on the hunt for a way to seal the Door to Darkness. Their quest will take them to familiar places like Neverland and Traverse Town, as well as include Munny-themed currency, Gummi Paths, and more nods to the characters and worlds of Disney and Kingdom Hearts.

Talisman: Kingdom Hearts Edition will come with a game board with three regions, custom six-sided dice, and other pieces that artfully combine the original tabletop game and the long-running video game. Game designer Elisa Teague expressed her enthusiasm for playing a part in the two franchises coming together.

THRILLED to announce my new game I designed: #KingdomHearts #Talisman from @USAopoly!
It was an honor to take these properties & design new mechanics that fit my beloved #Disney characters & KH, while keeping the heart & spirit of both games. #tabletophttps://t.co/8QeyiVeBO2

Keep an eye on USAopoly’s social media for more info and a release date for Talisman: Kingdom Hearts Edition soon!