If you want to add a little cinematic flare to your Dungeons & Dragons campaign, or just let your 6th level fighter play around with some of the most iconic movie weapons of all time, this is a good place to start. I sat down with rockstar DM and generally brilliant human Matthew Mercer to apply our own kind of magic and generate 5th edition stat blocks for five famous on-screen weapons.

THE TRI-SWORD | The Sword and the Sorcerer

Younger readers may not have caught this movie from 1982. This was a time of Conans and Beastmasters and movies like The Sword and the Sorcerer had to do everything they could to set themselves apart. For this movie it was the Tri-Sword, which is actually barely in the film, but it’s the one thing people remember. Basically it’s just a sword with three blades… which must be terrible when it comes to scabbard shopping. It’s an ordinary sword until it launches one of the blades out at an enemy and becomes something much more legendary. Matt and I tried to build a rule mechanic for the blade launch and also for putting the blades back on, something the movie never shows. This seemed a little dry so we added the ability to fire the blades while paralyzed, something seen in the later scenes of them movie. There’s also a moment where the hero (Talon) draws a dagger from the sword’s hilt but as this has no mechanical difference in D&D from simply drawing one from your belt we didn’t include it. Check it out here! 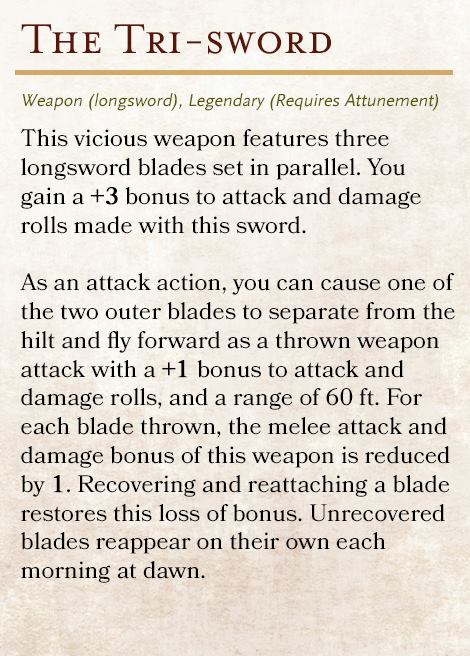 Another iconic 80’s hack and slash film, Krull also stands out for its weapon. This multi bladed throwing disk is just so badass you can’t help but want one for your next dungeon crawl. Also, the bad guys are aliens with laser lances. Sign me up! In the movie, the hero (Colwyn) can throw the Glaive and control where it goes. There are a lot of possible mechanics here and Mercer and I debated the pros and cons for each for a long time. In the end we decided to treat the Glaive like a dancing weapon, attacking each turn on its own as a bonus action then returning to the wielder’s hand. We also had to import the rules for Chakrams into 5e, which will be nice for anyone who wants to play Xena. On balance, the build we created is probably a little less powerful than what you see in the movie, but then again it doesn’t take your standard action, so what are you complaining about?

Creating Thor’s iconic hammer was no easy task. Between the comics and the movies and the original Norse legends they were based on, there is a lot of material to draw from. There are more than a few magical hammers already in 5th Edition including the Hammer of Thunderbolts which comes very close to hitting the mark. In the end, we tried to build in some of the other characteristics of the mystic Uru hammer, including Mjolnir’s requirement that a wielder be worthy. The solution here seemed to be creating the hammer as an intelligent weapon which let the Dungeon Master choose what exactly worthy meant. Check it out! 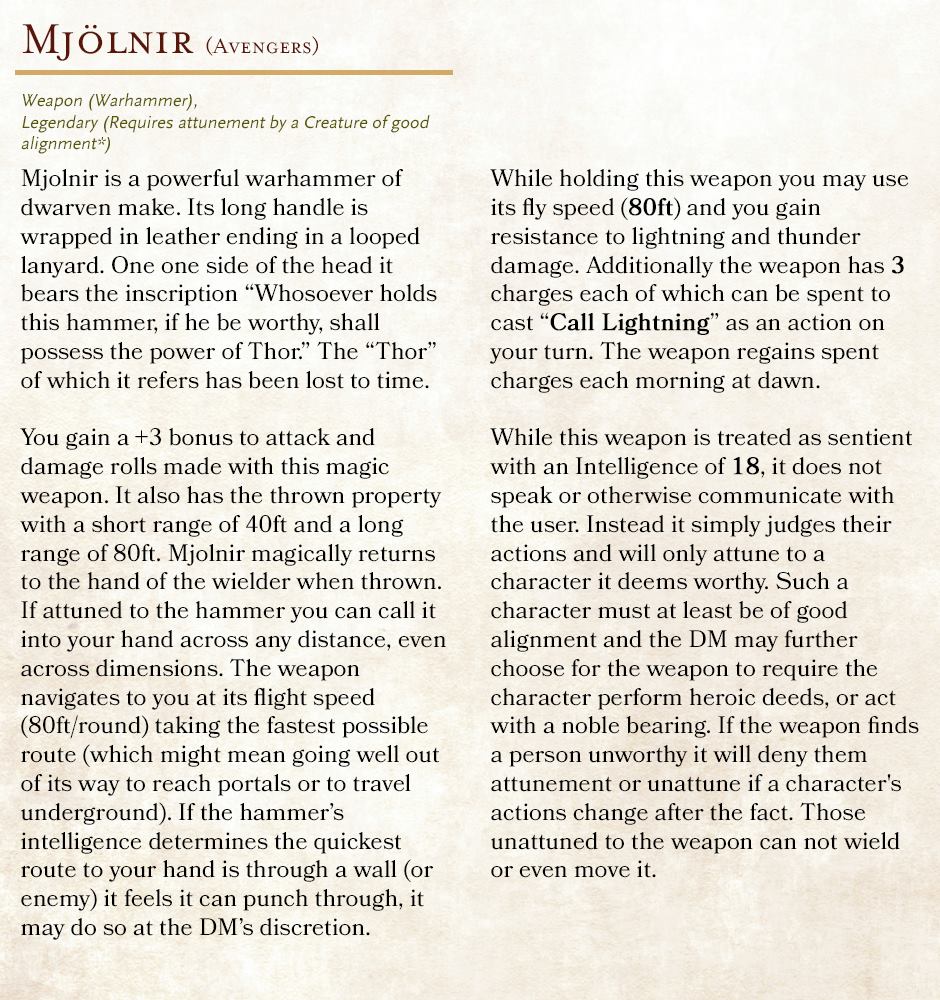 Our last two items are more modern equipment, so on top of converting them to game mechanics, we also had to “D&D them up” a bit. For Ash’s chainsaw we thought a gnomish treatment would give the weapon a more alchemical feel and also explain why it works without gasoline to power it. In our defense, he never refilled the gas in the movies either. We also wanted the weapon to be both powerful and unreliable. What’s the point of even using a chainsaw hand if you can’t have that moment where it conks out just when you need it most? Of course if you watch Critical Role, you know Mercer also has the firearms rules needed for a Boomstick to go with this. Maybe we’ll include that in the next one. 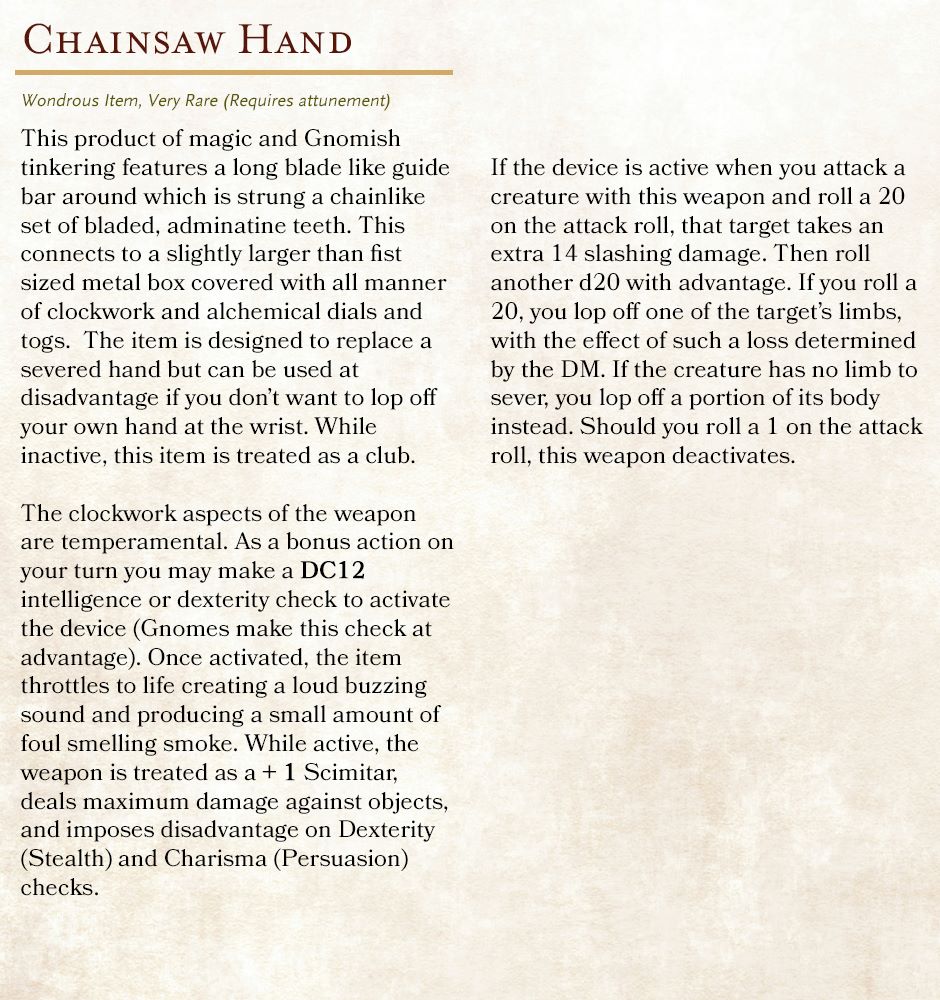 We included this one in case you want your Drow fighter to have yet another reason to call himself the “Underdark Knight.” We figured we’d look at adapting something from Batman’s utility belt into the 5e world. A lot of Batman’s iconic weapons are easily made from existing D&D items. For Batarangs, use darts. For smoke bombs, use a fog cloud spell. For a Batmobile, use a giant bat. See? Easy! For the grapple gun, we thought a slightly more alchemical approach would work here, too. Instead of a tech item, how about a bottle of cord that magically winds itself back in? Really, the appearance is up to you but here are some stats we think make it work.

Of course these are just five items picked from an arsenal of many more. From movies to comics to fantasy novels, there are an almost inexhaustible supply of items to add to your games if you think they will get a smile out of your PCs. In building these items, Matt was very clear that the golden rule is to keep it simple. Once we had builds we liked, he went back over everything and cut out as much as we could. Good magic items don’t add time to play, they add flavor. We wanted everything to be playable and fun but never to hamper the pacing by forcing a character to spend too much time with their nose in the book.

Thanks to Matthew Mercer for loaning his valued expertise for this article. You can see more of Matt’s work on Critical Role and Matt is also very busy voicing a whole bunch of characters in all kinds of games and animation.

We know you have more movie weapons you’d like to see made 5e ready, so leave your picks in the comments section. You can also leave us your own movie item stat blocks or tell us stories of that time you created Jason’s hockey mask and how you used it. Speaking of using items, if you make use of any of these builds in your game you can let us know there too.