We all love mashups of our favorite fandoms and our favorite games, like D&D.  We’ve done crossover character sheets for the Ang, Sokka, Katara, and Zuko,  as well as Suki, Toph and Iroh in parts 1 and 2 of this series, and we decided to do just one more set of D&D character sheets for Avatar: The Last Airbender.  Hold onto your hats because we’re about to take a trip with the best baddies this side of Ba Sing Se!

Azula, younger sister to Zuko and princess of the Fire Nation. Azula is, arguably, one of the cruelest and strongest bad guys in Avatar. Like her brother and uncle, Azula would be a sorcerer with draconic ancestry. She is highly powerful, smart, and tends to be an offensive fighter. As a noble, Azula is naturally proficient with history and persuasion checks. As a conniving and powerful bad guy, Azula would also be proficient in deception and intimidation. I’ve chosen to primarily focus Azula in offensive magic with fire or lightning damage. However, since Azula is a fan of damaging others (and since we had the cantrip space for it), I also gave her Acid Splash. It is possible to play Azula as chaotic neutral, focusing more on her flaws and bonds as her reasons for taking evil actions. I don’t personally give her that much credit. Yes, Azula’s childhood was messed up and she should have received professional intervention long before she did, but ultimately she chose to continue grabbing for power and sabotaging her brother every chance she got (even after the series ended!). For this reason, I’d personally play Azula as one of the few truly evil characters in the show. 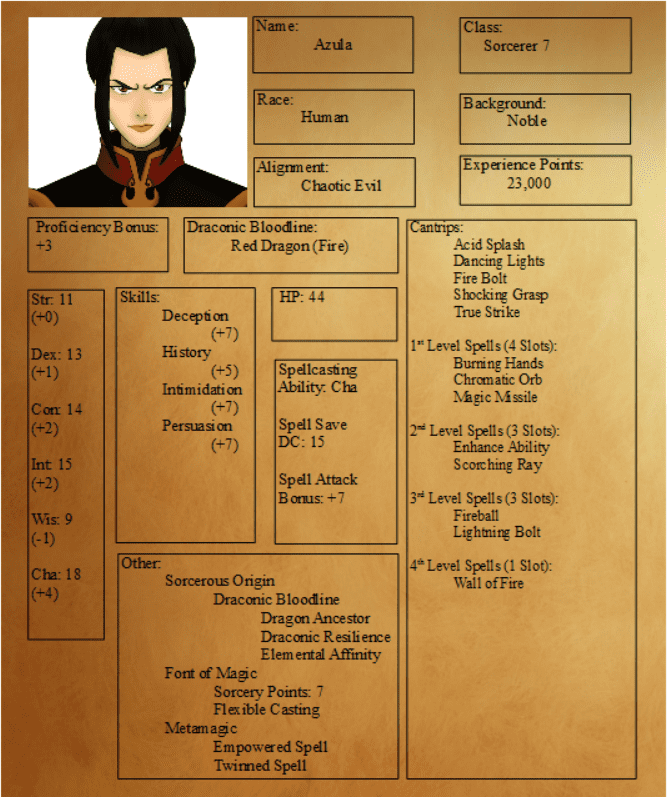 Mai is a close friend of Azula, girlfriend of Zuko, and daughter to one of the wealthiest families in the Fire Nation. She primarily focuses on sharp weapons she can throw, so daggers would be her main weapon. However, as a rogue, she also gets to start with a rapier and a shortsword (switch for a shortbow and arrows if you want to focus even more on range). Mai’s upbringing taught her to keep everything bottled up. She rarely ever discusses her emotions, let alone lets them show (unless Zuko is involved), and is willing to go along with either good or evil as long as it cures her boredom and suits her needs. For this reason, I’ve chosen to play her as true neutral (and she is one of the few characters that shows how to make this alignment fun). Rather than being interested in stealing, and since she isn’t a bender, Mai would follow the Assassin archetype. This archetype goes along nicely with Mai’s lethal and precise fighting style. 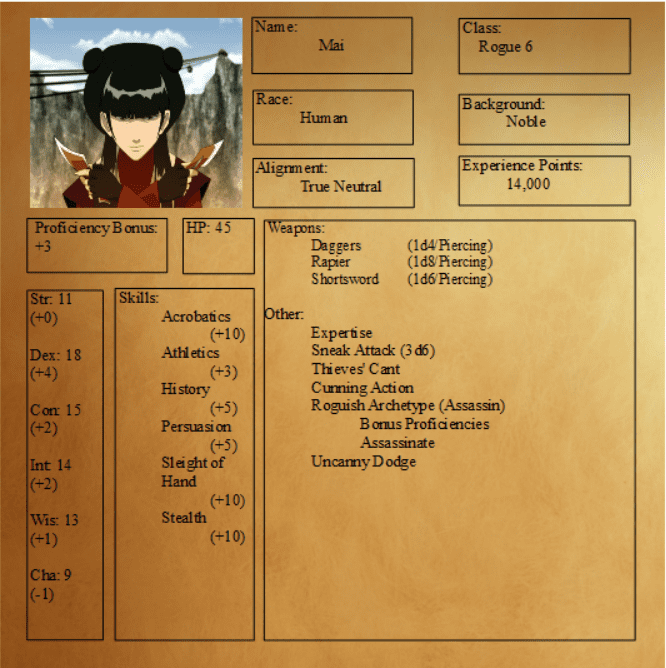 Ty Lee may be one of the easiest ports from Avatar to D&D. She comes from a noble family so we emphasized her nobility in this sheet, but you may want to consider giving her the entertainer background. As soon as she could, Ty Lee ran away and joined the circus as an acrobat in order to escape being one in an identical set (she has six identical sisters, ouch). Ty Lee, though not a bender, focuses on a rare martial fighting technique which blocks chi to incapacitate her foes. This almost perfectly aligns with being a monk of the Way of the Open Hand. Monks of this tradition are masters of martial arts combat and learn techniques which trip up their opponents and heal themselves. For instance, with Open Hand Technique, Ty Lee can manipulate an opponent’s ki, potentially taking away their ability to react until the end of your next turn. Since Ty Lee’s fighting style could incapacitate foes, even taking away their bending abilities, this is a perfect choice for her in D&D. 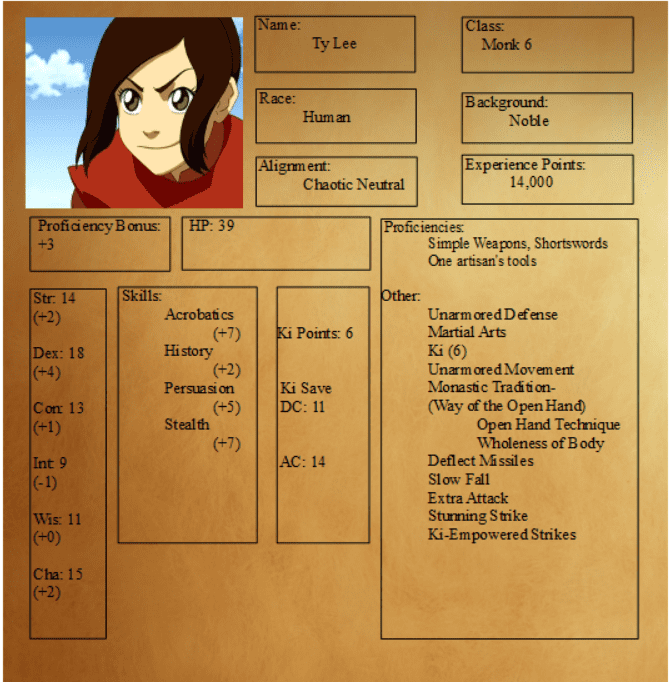 And that’s it! We have finally reached the end of our Avatar PCs. What did you think of our choices? Are you sad we didn’t do the cabbages man? Which fandom should we convert to D&D next? Let us know in the comments!

Looking to get more D&D action in your life? Don’t forget to watch Critical Role every Thursday night on Geek & Sundry’s Twitch channel.

Be The Very Best Pokémon Go Trainer By Understanding This O...

Movies
Return to Pandora with the AVATAR: THE WAY OF WATER Trailer
Amy Ratcliffe
2 MIN READ