Boss Monster: Why Being the Bad Guy Is So Very Good - Nerdist

Boss Monster: Why Being the Bad Guy Is So Very Good

Let’s face it: there are some days where being the bad guy is sort of fun. There’s something remarkably satisfying watching people on YouTube try to beat impossibly hard Super Mario Maker levels and just end up with a pile of dead plumbers in the process. It’s a reasonable guilty pleasure.

Now take that satisfying hero-killing feeling, layer a thematic retro 8-bit video game sensibility and aesthetic, turn it into a competition of who can collect 10 hero souls the fastest, and you’ve got experience that is Boss Monster. Here’s why we play and love it even more than plumber-killing goodness.

It’s deeply influenced by the coolest adventure stories from across culture. 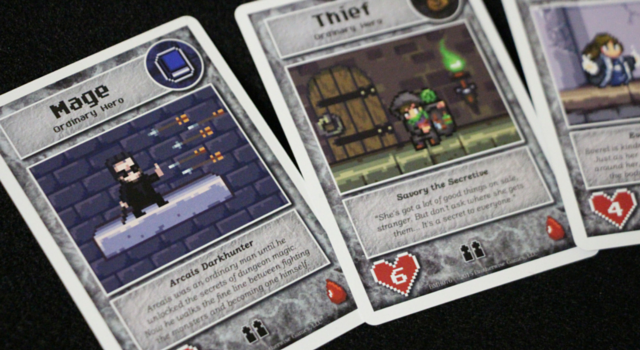 At first glance, it’s easy enough to see the parody references to old-school video games like Super Mario Bros. and Double Dragon. The fact of the matter is that you’ll find pop culture references from pretty much anywhere–including books, movies, fantasy RPGs, comics, history, and mythology–throughout the game. On almost any card, you’ll find a loving throwback to your favorite fandom.

You’ll also find (rather familiar looking) heroes who are divided into several tropes: clerics, fighter, mages, and thieves. Clerics love dungeons with holy relics, fighters want the shiniest weapons, mages want tomes of knowledge, and thieves seek treasure. While it’s easy to reduce each adventurer to a set of stats, there’s something truly enjoyable about going through the various heroes’ backstories because of the parody references and witticisms. The same could be said about any card in the game, though, since each is thematic and thoroughly entertaining. 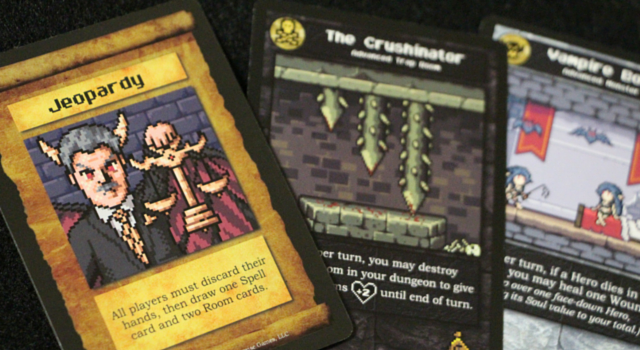 The game bills itself as a dungeon building game, but it tends to be so much more than it appears. Players start the game randomly selecting a boss monster around whom they must build their dungeon. Essentially, you and your opponent are building your dungeons simultaneously, so you don’t know if you’re going to actually attract heroes until you reveal your dungeon additions at the same time.

There’s also the challenge of balancing the fact that cards that are generally very attractive to heroes are also less dangerous, meaning that if you do build a highly attractive dungeon, the chances are high that heroes will survive to get to your boss monster and wound you. If you take 5 wounds in a turn, you’re out of the game.

If you do build a dungeon that happens to be an attractive death trap, you’re golden. Don’t get too confident, though, your opponents may have cards that undermine the effectiveness of your dungeon.

It plays furiously and is highly replayable. 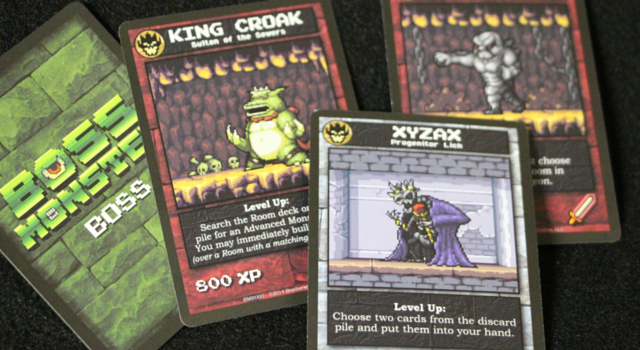 Boss Monster is definitely one of those games you can keep coming back to, as each new session and hand offers a myriad of different strategic options. With both your boss monster and your hand determined by the luck of the draw, you’ll constantly be thinking of new ways to play. The game plays fast, taking about 15 minutes, so even if you have a terrible hand you, can reset and start again right away. That’s the epitome of smallbox gaming, after all.

It’s a lot easier to play a game of Boss Monster than it is to get a cartridge working in your old NES. The rules may seem a little complex at first, but don’t sweat it. After a single playthrough, you’ll find that they’re quite intuitive and you’ll be hooked and ready to play again and again. We don’t blame you. There’s something somewhat cathartic about luring heroes and slaying them.

The ultimate moral of the game is that sometimes killing adventurers is its own reward.

Have you played Boss Monster? Let us know in the comments what you love about the game!