Join the Federation and hop aboard the U.S.S. Enterprise NCC-1701 to boldly go where no cooperative board game has gone before. In Star Trek Panic, you and your crew attempt to complete five tension-filled missions while defending the ship against alien encounters and enemy threats.

Based on the popular series of Castle Panic games, Star Trek Panic takes the main mechanisms (cooperative play and tower defense) and adds several twists to its tried-and-true formula to make a more tense and exciting gaming experience.

Will you be able to complete missions based on classic episodes like Space Seed, The Deadly Years, and The Trouble with Tribbles? Can you win battles against the deadly Klingon, Romulan, and Tholian ships? Or will the Enterprise sustain irreparable damage, dooming you and your crew members?

With the Enterprise in the middle of the board and surrounded by incoming threats, you’ll draw the first of five missions. Each player takes on an iconic role from the original series: Kirk, Spock, McCoy, Scotty, Sulu, Uhura, or Chekov. Each character has a special ability that may be used during their turn.

On your turn, you may trade cards with your crew before playing cards and maneuvering the Enterprise. Cards such as phasers or photon torpedoes are used to destroy enemy ships, while Dilithium and Tritanium cards can repair damage to the Enterprise (and when played together, you can repair a destroyed shield or hull).

Players familiar with the original Castle Panic will recognize this style of cooperative card play; however, Star Trek Panic takes things up a warp factor or two by including unique character powers and tasking players with completing several missions. Missions require players to maneuver the Enterprise, play certain cards, and other tasks within a certain number of turns.

You might call upon other classic characters like Nurse Chapel and Yeoman Rand, who will supply you with extra cards or help you complete missions. It’s a terrific thematic touch that’ll appeal to Star Trek fans; even Castle Panic fans who haven’t watched a single episode will appreciate the challenge of finishing missions before time runs out. 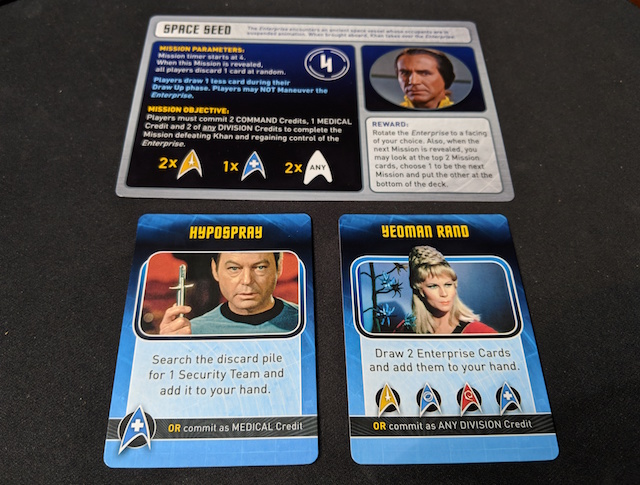 If the Enterprise is taking too much damage, maneuver to a friendly Federation starbase for instant repairs. But beware of the cloaking powers of the Klingon and Romulan of Birds of Prey, as they launch surprise attacks on the Enterprise. This is reminiscent of the original game’s castle being bombarded by orcs, goblins, and the occasional boulder; however, Star Trek Panic improves on it by adding movement as a key element to gameplay. While the crew won’t be able to completely evade threats on board, they have more options when it comes to decision-making.

Do you steer the ship towards that Federation starbase? Or do you try to finish a mission quickly, even as the Enterprise takes another damaging blow to its hull? Other enemy forces and alien encounters will hinder your chances of completing your missions and threats continue to appear at the end of every round so you’ll need every last resource to keep the ship together.

Even if you successfully complete five missions there’s no time to celebrate since your job isn’t over. You need to survive the rest of the threats on board before you can warp away victorious. 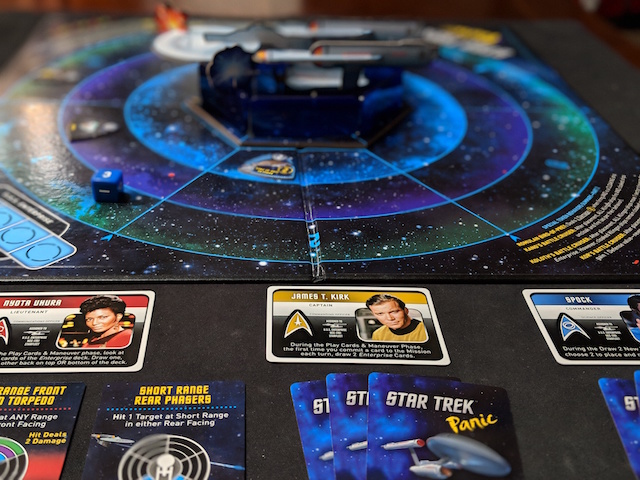 The entire line of Castle Panic games (Munchkin Panic and the zombie-themed Dead Panic) continue to be popular among gamers, thanks to their fun and streamlined cooperative play. In Star Trek Panic, the series has reached a new high. Adding missions and the Enterprise movement mechanism are inspired design choices; Fireside Games and USAopoly took a good game and made it better.

Fans of the original Star Trek will absolutely love this game. From the mission cards and player cards to the character abilities and the 3-D Enterprise on the board, the game is a wonderful tribute to the franchise’s enduring popularity. You’ll be able to live long and prosper after a rousing session of Star Trek Panic.